In May 2018 President Trump withdrew from the sham Iranian nuclear deal approved under the corrupt Obama Administration. 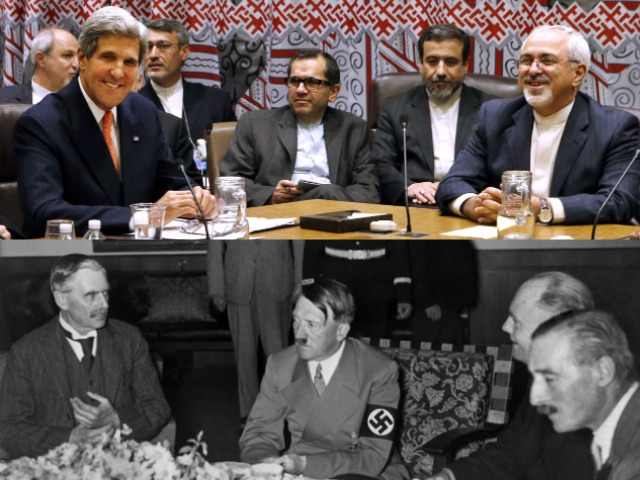 President Trump knew the deal with the radical Islamic Iranian mullahs was not working and not worth the paper it was written on.

This was despite former Secretary of State John Kerry illegally working against the Trump administration to salvage the weak deal with the Iranian regime. Let it be known Kerry’s daughter Vanessa is married to an Iranian national and physician. His best man at the ceremony was the son of Mohammad Javad Zarif, Iran’s Minister of Foreign Affairs — the position comparable to U.S. Sec of State. Zarif was also and Kerry’s chief counterpart in the nuclear deal negotiations.

Billions of dollars, Cash on a palate illegally moved to Iran courtesy of President Obama in the middle of the night, Obama is a Traitor working against the United States of America funding Iranian terrorism.

Iran’s Foreign Ministry Spokesman Hossein Jaberi Ansari reportedly warned Western officials in May 2018 that if they do not put pressure on the Trump administration the Iranian regime would leak the names of all Western officials who were bribed to pass the weak deal.

H.J.Ansari Zarif’s senior advisor: “If Europeans stop trading with Iran and don’t put pressure on US then we will reveal which western politicians and how much money they had received during nuclear negotiations to make #IranDeal happen.”
That would be interesting.#JCPOA

So who are these bribed officials?

Daniel Greenfield at FrontPage.com reported in 2015 on the Democrat senators who took money from the Iran US lobby before their vote to support the deal.

Senator Markey has announced his support for the Iran deal that will let the terrorist regime inspect its own Parchin nuclear weapons research site, conduct uranium enrichment, build advanced centrifuges, buy ballistic missiles, fund terrorism and have a near zero breakout time to a nuclear bomb.

There was no surprise there.

Markey had topped the list of candidates supported by the Iran Lobby. And the Iranian American Political Action Committee (IAPAC) had maxed out its contributions to his campaign.

After more fake suspense, Al Franken, another IAPAC backed politician who also benefited from Iran Lobby money, came out for the nuke sellout.

Senator Jeanne Shaheen, the Iran Lobby’s third Dem senator, didn’t bother playing coy like her colleagues. She came out for the deal a while back even though she only got half the IAPAC cash that Franken and Markey received.

As did Senator Gillibrand, who had benefited from IAPAC money back when she first ran for senator and whose position on the deal should have come as no surprise.

The Iran Lobby had even tried, and failed, to turn Arizona Republican Jeff Flake. Iran Lobby cash had made the White House count on him as the Republican who would flip, but Flake came out against the deal. The Iran Lobby invested a good deal of time and money into Schumer, but that effort also failed.

Still these donations were only the tip of the Iran Lobby iceberg.

Gillibrand had also picked up money from the Iran Lobby’s Hassan Nemazee. Namazee was Hillary’s national campaign finance director who had raised a fortune for both her and Kerry before pleading guilty to a fraud scheme encompassing hundreds of millions of dollars. Nemazee had been an IAPAC trustee and had helped set up the organization.

Bill Clinton had nominated Hassan Nemazee as the US ambassador to Argentina when he had only been a citizen for two years.

Several other Democrats were speakers for NIAC, the regime’s lobby house in the US.

Iraqi Parliament Votes to End US Military Presence in Country to Shouts of “Allahu Akbar!

The Iraqi Parliament held an emergency session on Sunday to discuss the US airstrike in Baghdad that killed Iranian terror leader...