‘F**K OFF’: Ricky Gervais Blasts Hollywood For Lecturing World, Politicizing Everything, Trolls Them Over Epstein. 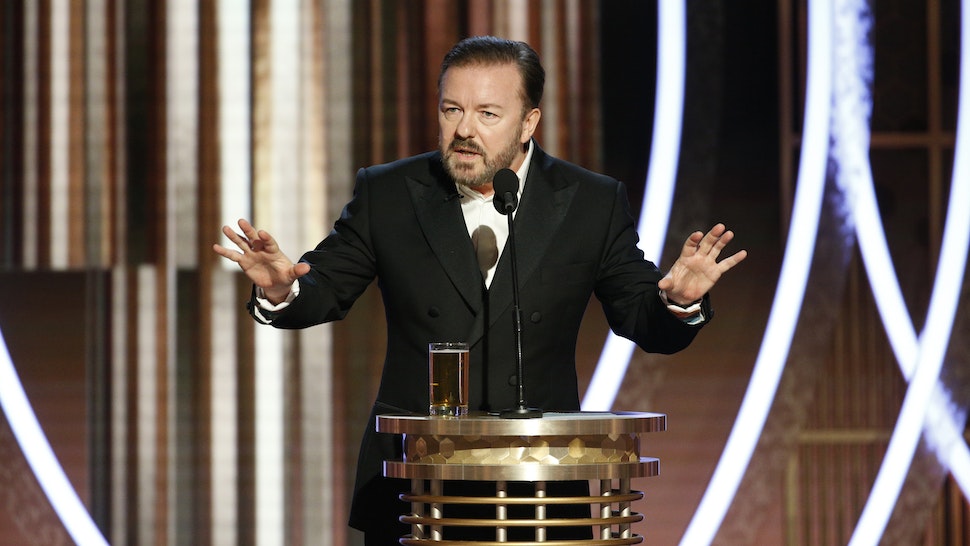 Comedian Ricky Gervais, host of the 2020 Golden Globe Awards, slammed Hollywood elites on Sunday for constantly lecturing the world and for politicizing everything, saying “You know nothing about the real world.”

“Apple roared into the TV game with ‘The Morning Show,’ a superb drama about the importance of dignity and doing the right thing, made by a company that runs sweat shops in China,” Gervais said. “So, well, you say you’re woke, but the companies you work for – I mean, unbelievable, Apple, Amazon, Disney. If ISIS started a streaming service, you would call your agent, wouldn’t you?”

“So if you do win an award tonight, don’t use it as a platform to make a political speech, right?” Gervais continued. “You’re in no position to lecture the public about anything. You know nothing about the real world. Most of you spent less time in school than Greta Thunberg. So, if you win, come up, accept your little award, thank your agent and your god, and f**k off. No one cares about your views on politics or culture.”

"…You say you're woke but the companies you work for…Apple, Amazon, Disney…if ISIS started a streaming service you'd call your agent, wouldn't you. If you do win an award tonight, don't use it as a platform to make a political speech…" pic.twitter.com/rVRIng2JAH

Later in his speech, the audience groaned over a joke he made about convicted pedophile Jeffrey Epstein, to which he told them, “Shut up. I know he’s your friend, but I don’t care.”

Tonight isn’t just about the people in front of the camera,” Gervais said. “In this room are some of the most important TV and film executives in the world, people from every background, but they all have one thing in common: they’re all terrified of Ronan Farrow.”

“No one cares about movies anymore, no one goes to the cinema, no one watches network TV,” Gervais continued. “Everyone’s watching Netflix. This show should just be me coming out, going, ‘Well done Netflix, you win everything. Good night.’”

“But no, we drag it out three hours, you could binge watch the entire first season of ‘Afterlife’ instead of watching this show,” Gervias continued. “That’s a show about a man who wants to kill himself because his wife dies of cancer and it’s still more fun than this. Okay, spoiler alert, season two is on the way, so in the end obviously he didn’t kill himself – just like Jeffrey Epstein.”

he crowd initially laughed but groans quickly were heard across the room.

“Shut up, I know he’s your friend, but I don’t care,” Gervais fired back. “You had to make your own way here, your own plane, didn’t you?”

Ricky Gervais: “So in the end he obviously didn’t kill himself. Just like Jeffrey Epstein. Shut up, I know he’s your friend but I don’t care.” pic.twitter.com/ILkx36BIiE

Gervais also took shots at celebrities who were in attendance, saying, “You all look lovely all dolled up, you came here in your limos. I came here in a limo and the license plate was made by Felicity Huffman. It’s her daughter I feel sorry for. That must be the most embarrassing thing that ever happened to her. And her dad was in ‘Wild Hogs,’ so…”

Gervais added, “Leonardo DiCaprio attended the premiere and, by the end, his date was too old for him. Even Prince Andrew is like, ‘Come on Leo, mate. You’re nearly 50.”

He upstaged whatever grandstanding actors, producers and stage hands had planned for their acceptance speeches by delivering what will be the talk of the show right out of the gate.

In Case You Missed It:  EXCLUSIVE: Shocking microscopy photos of blood clots extracted from those who “suddenly died” – crystalline structures, nanowires, chalky particles and fibrous structures
Posted in Freedoms and tagged Hollywood.

The confrontational political environment in Washington made it more difficult for the president to give Congress advance notice of the...