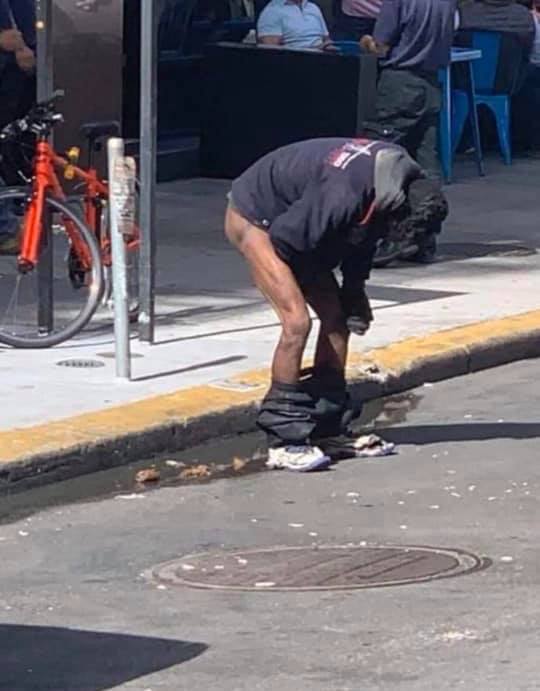 It’s always entertaining to see diametrically opposing leftist movements collide with one another. Now we have the environmental groups squaring off against the homeless advocacy groups, as California’s homeless crisis is leading to mass contamination of the rivers and streams. Rather than going through sewage treatment, human waste from the homeless is ending up directly in the water ways.

“We should all work together to clean up these hazardous waste and homeless sites before the whole city rots away,” Trump tweeted about San Francisco on Oct. 26. “Very bad and dangerous conditions, also severely impacting the Pacific Ocean and water supply.”

San Francisco officials were quick to dispute Trump’s claims. But some of California’s most prized rivers, beaches and streams are indeed contaminated with levels of fecal bacteria that exceed state limits, threatening kayakers, swimmers — and the state’s reputation as a bastion of environmental protection.

The presence of fecal bacteria in water is usually the result of problems with sewer systems and septic tanks. But water quality officials agree that the source of at least some of the fecal bacteria is California’s growing homeless population, most of whom don’t have reliable access to toilets.

“I’ve carried 5-gallon buckets that were unambiguously being used as toilets,” said David Gibson, executive officer of the San Diego Regional Water Quality Control Board, describing his experience cleaning up homeless encampments. “They were taking it to the San Diego River, dumping it there, and rinsing it out there.”

Fecal contamination of waterways is a widespread problem and becoming more urgent in states with large homeless populations. In Seattle, homeless people living in RVs are accused of dumping raw sewage straight into storm drains, which flows directly to local waterways. In Oregon, workers cleaning up homeless camps along the Willamette River in Eugene routinely find feces and needles.

The Trump administration has fixated on California’s homeless population in particular as a potent source of pollution.

In addition to Trump’s tweets, the U.S. Environmental Protection Agency sent a letter to California Gov. Gavin Newsom on Sept. 26 alleging that the state’s lack of urgency on homelessness threatens public health by polluting nearby water with untreated human waste. It then issued a notice to San Francisco accusing it of violating the federal Clean Water Act.

Jared Blumenfeld, secretary of the California Environmental Protection Agency, responded by accusing the federal EPA of retreating on clean water protection, and called the administration’s focus on the environmental impact of homelessness “sensationalized” and “misguided.”

When it comes to water, scientists look for E. coli and other bacteria to determine levels of fecal contamination. While E. coli is present in both human and animal feces, human fecal contamination is particularly dangerous because it can transmit diseases that affect people, including hepatitis A and cholera.

Most people are not at risk of getting sick unless they drink the water, or if pathogens enter open cuts or sores, said Richard Ambrose, a professor in the department of environmental health sciences at UCLA. Homeless people face the highest risk because they are more likely to wash or wade in the water and have less access to toilets and showers, he said.

in Sacramento, regulators have been measuring elevated fecal bacteria levels in the lower American River for more than three years. Located near downtown Sacramento, it is a popular destination for water sports, even as hundreds of homeless people camp nearby.

Some recreational areas, including Tiscornia Beach, where families picnic, BBQ and wade in the river, had E. coli levels so high in the past year that they hit the upper limits of what the water board’s laboratories could measure — more than seven times higher than the state standard, said Adam Laputz, assistant executive officer of the Central Valley Regional Water Quality Control Board.

Contamination from homeless camps is so easy to observe — and smell — that there is no “need to monitor to know there’s a problem,” said Thomas Mumley, executive officer of the San Francisco Bay Regional Water Quality Control Board, which stretches from Napa County to Santa Clara County.

If there are no bathrooms in or near a homeless encampment, “we can assume there’s a discharge of waste” where there shouldn’t be, he said.

This past October, the Environmental Protection Agency sent a nastygram to San Francisco officials, naming all of the regulations that the liberal utopia is in violation of.

MEANWHILE, Governor Newsom proudly proclaims California to be the most un-Trump state, while also announcing a budget to address homelessness.

In Case You Missed It:  Same White House that now admits it LIED about vaccines is also running “Disinformation Governance Board” with claimed monopoly on truth and facts
Posted in Freedoms and tagged California, Liberalism.

Texas Announces the State Will Not Be Accepting Any More Refugees

by Cassandra Fairbanks Texas Governor Greg Abbott has announced that the state will not be participating in the federal refugee...