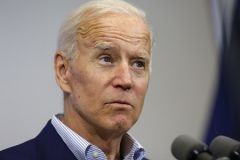 The State Department is withholding all key documents on Biden’s extortion of the Ukrainian government until after Trump’s impeachment trial.

Joe Biden’s drug addict son Hunter was sitting on the board of Burisma Holdings, a Ukrainian natural gas company and being paid by some accounts over $200,000 a month even though he had zero experience in the field.

Then-Vice President Joe Biden, who was tasked to oversee US dealings with Ukraine, threatened to withhold over $1 billion in loan guarantees to Ukraine unless they fired Viktor Shokin.

Biden bragged about shaking down Ukraine and getting Mr. Shokin fired during a 2018 speech to the Council on Foreign Relations.

Instead of investigating Biden for corruption and extortion, the Democrats impeached President Trump for wanting to work with Ukrainian President Volodymyr Zelensky to ferret out Biden corruption.

The State Department told Judicial Watch that it hasn’t even started searching for the documents and won’t be releasing anything until the end of January.

Judicial Watch president Tom Fitton blasted the State Department and said “Pompeo needs to get on the ball.”

Coincidence? The State Department won’t finishing “searching” for key Biden-Ukraine docs until after the impeachment trial.

State Department withholding all key docs on Biden-Ukraine corruption until after abusive impeachment/coup of @RealDonaldTrump. https://t.co/MW8dYvXswe

You can support Tom Fitton and Judicial Watch by clicking here.

In Case You Missed It:  Bidenomics: US To Totally Collapse after Dollar Collapses
Posted in Tyranny and tagged curruption, Ukraine, Usurper Joe Biden.

LOS ANGELES—Ex-Stormy Daniels lawyer and Trump antagonist Michael Avenatti was led out of the State Bar Court in Los Angeles by federal agents...