With no cure to offer, China’s top health body has advised hospitals to use a range of treatments – including traditional Chinese medicine and “artificial lungs” – to tackle a deadly coronavirus.

In guidelines published on Thursday afternoon, the National Health Commission advised that suspected cases be isolated.

“Confirmed cases can be put in the same ward. Critical patients need to be put into intensive care as soon as possible,” the commission said.

The novel coronavirus’ case fatality rate (CFR) is currently estimated at around 2%, the World Health Organization (WHO) said on Wednesday, January 29, 2020[1][2].

However, the WHO specified that this is a very early and provisional estimate that may change. Surveillance is increasing, within China but also globally, but at the moment:

Fatality rate can change as a virus can mutate, according to epidemiologists.

Once the province Hubei (where the epicenter Wuhan is situated) is removed from the calculation, the national (China) mortality rate drops to 0.3%. Within the Hubei province, the mortality rate is about 1% when excluding the city of Wuhan (where it is 5.5%).

Comparison with other viruses 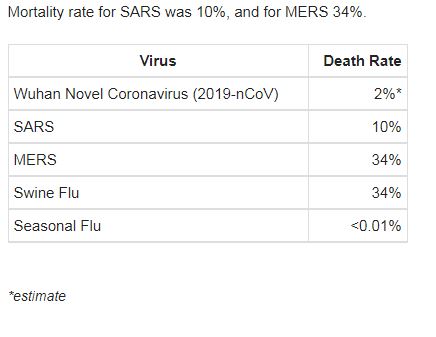 7 Questions and Answers From Day 9 of Trump Impeachment Trial