Along with Prime Minister Benjamin Netanyahu, all my friends are delighted with Donald Trump’s plan to solve the Palestinian-Israeli conflict. I agree that, in contrast with prior presidential plans, this one has much to commend it; unlike the Carter, Reagan, Clinton, and George W. Bush proposals, it takes Israeli security concerns seriously. Most of all, it indicates an unprecedented and emotionally wonderful level of U.S. support for Israel.

The White House announcement of “Peace to Prosperity.”

That said, I am not delighted with the plan, and for two main reasons. First, who needs it? Israel does best when it acts independently on its interests, not following the U.S. lead. All Israeli leaders since 1948 have wisely resisted plans imposed from the outside, implicitly asking, “Who assigned you to solve our problems?” But this time, the country’s top two politicians dashed to Washington to endorse just such a plan. I predict that these same leaders or their successors will rue ceding such authority to Americans.

Second, I worry that, like every previous and failed scheme to solve the Palestinian-Israeli conflict, the Trump plan is based on giving the Palestinians hope. That sounds nice but it is profoundly counterproductive.

To understand why, consider the Oslo Accords of 1993, the most important plan until now; it was premised on rewarding the Palestinians for good behavior. It promised autonomy and hinted at independence. It aspired to a misty “New Middle East” in which economic cooperation serves as the basis to reconcile historically hostile peoples. It attempted to reach this goal via such mundane efforts as a Housing and Construction Program, a Small and Medium Business Development Plan, a Human Resources Plan, and an Infrastructure Development Program for water, electricity, transportation, and communications. Twenty-seven years later, all sides agree on Oslo’s utter failure.

The Trump plan also depends on a mix of sovereignty and economic advancement, and it posits even grander ambitions. Forget autonomy; it projects full-fledged independence for the “State of Palestine,” a term mentioned an astounding 1,397 times in the course of a 180-page document. Surely, anyone concerned with Israel’s security shudders at this imminent prospect.

As the plan’s title (“Peace to Prosperity”) and subtitle (“A Vision to Improve the Lives of the Palestinian and Israeli People”) suggest, it has gaudy economic aspirations. Noting that Gazans “suffer from massive unemployment, widespread poverty, drastic shortages of electricity and potable water, and other problems that threaten to precipitate a wholesale humanitarian crisis,” it promises to usher them into “a prosperous future” with the help of over $50 billion in new investment over ten years.

Peace to Prosperity estimates that its prescriptions could cause the Palestinian GDP to “double in 10 years, create over 1 million new jobs, reduce the unemployment rate below 10 percent, and reduce the poverty rate by 50 percent.” In this spirit, the word electricity occurs 116 times in the plan and prosperity 303 times.

WT illustration for this article.

The plan goes into minute details. For example, it calls for the establishment of a “Dead Sea Resort Area,” demanding that Israel allow Palestine to develop it to the north of the Dead Sea along with a road allowing Palestinians “to travel from the State of Palestine to this resort area, subject to Israeli security considerations.” Or it foresees raising and spending $25 million over a two-year period to provide “robust technical support to the Palestinian public sector to develop a new trade regime and framework.”

My response: Does a single person out there actually believe any of this chimera will be implemented?

Rather than – once again – attempt to lure Palestinians into accepting their Israeli neighbor by pretending they will attain a better life, Palestinians need to hear the unvarnished truth:

My reservations about the Trump plan concern its repeating and heightening the old, failed approach of promising the Palestinians benefits. No, they need to hear the deep truth that nothing good will happen until they give up their foul rejectionism. Rather than hold out hope, it should paint a picture of despair. Failing this, the plan will end up as irrelevant as every prior presidential initiative. 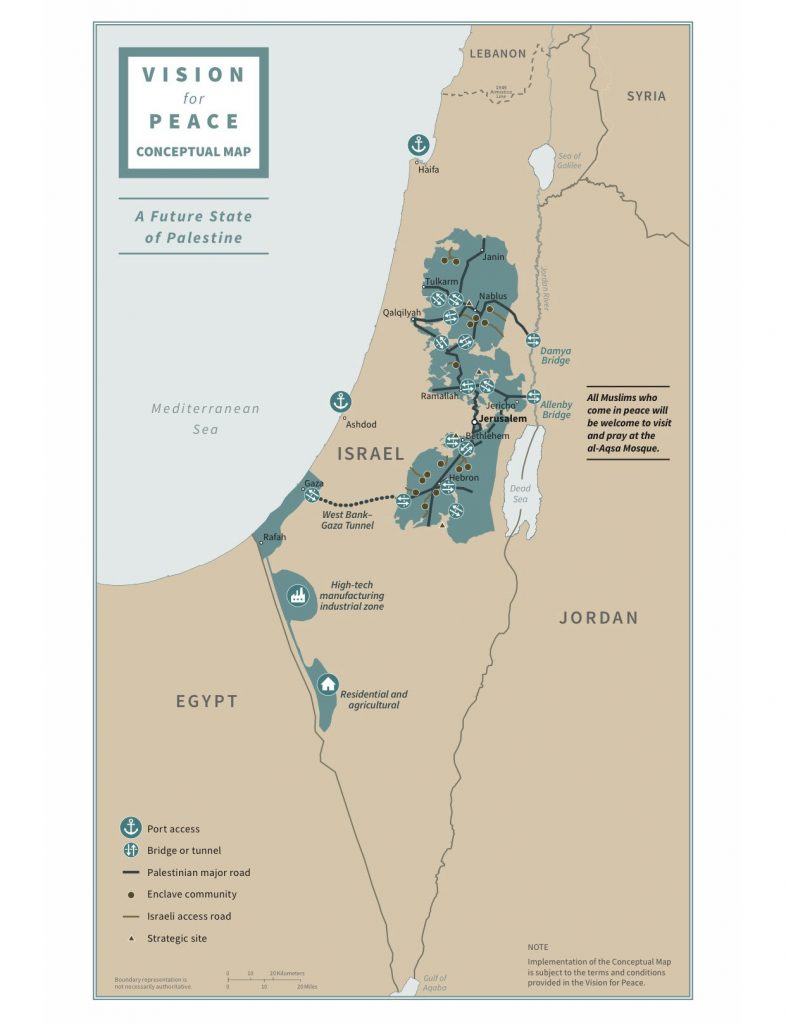 Wednesday was question-and-answer day in the Senate impeachment trial of President Donald Trump, and it included a thought exercise in...