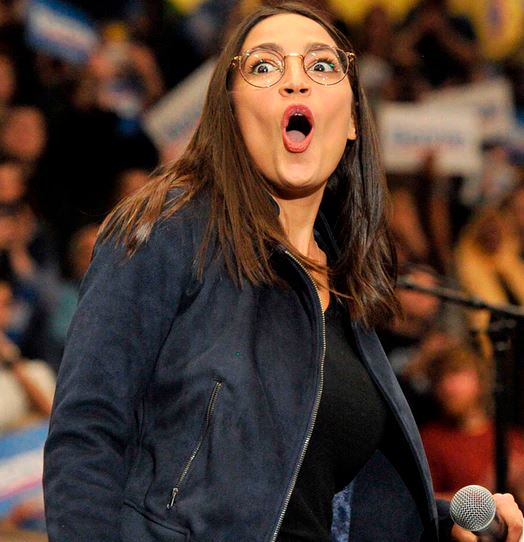 The Democrat presidential campaign of socialist Bernie Sanders has reportedly had to talk to far leftist socialist Rep. Alexandria Ocasio-Cortez (D-NY) about her behavior while campaigning for Sanders, including allegations that she has encouraged criminal activity.

However, the most troubling aspect of Ocasio-Cortez’s behavior centered around remarks that she made about federal law enforcement officials.

“Ocasio-Cortez’s radical comments about the abolition of U.S. Immigration and Customs Enforcement and Customs and Border Patrol were … seen by even the leftist within the socialist Sanders campaign as going too far, straying from Sanders’s stance on the issues in encouraging people not to cooperate with law enforcement agencies,” a source told Vanity Fair.

“Organizing is about tipping people off if you start to see that ICE and CBP are in communities to try and keep people safe.” Ocasio-Cortez said at the rally. “I’m not here to reform some of these systems when we talk about immigration. I’m here because Senator Sanders has actually committed to breaking up ICE and CBP. That’s why I’m here.”

Vanity Fair noted that Ocasio-Cortez rudely refused to respond to a request for comment and hung up on them. Ocasio-Cortez  never responds to press inquiries about anything she is called out on, and she calls debate invitations “cat calls.”

Former Acting Immigration and Customs Enforcement (ICE) Director Tom Homan unloaded on Ocasio-Cortez following her remarks, noting that she was actively encouraging people to commit obstruction and break the law.

“ICE is keeping the community safe,” Homan continued. “It’s an incredibly stupid statement she made, which doesn’t surprise me because she’s about as far from smart as anybody could possibly be, but what she said is dangerous. These men and women put their lives on the line every day to arrest criminals off the streets, especially in New York.”

“My last year as ICE director, we took 5,000 criminals off the streets of New York,” Homan continued. “These ICE agents have done more to protect the residents of New York than she ever has done or ever will do.” AOC seems to be okay with rapist and murders walking our streets after they are releases from prisons, the system wants them deported.

It’s a dangerous statement, it’s idiotic, and I just can’t believe that she can stand up on stage and make a statement like that and not have any repercussions from the House Ethics Committee,” Homan continued. “They are trying to remove the president of the United States, a sitting president, and at the same time she’s saying ICE shouldn’t remove criminal aliens. They say the president is obstructing them, there’s no one that’s been obstructing more than Congress. They’ve been obstructing this president from day 1.”

“She’s standing on stage and telling people to give a heads up that the good guys are going to be arresting the bad guys in your neighborhood… that’s obstruction, that’s a crime,” Homan continued. “She’s disgusting, something needs to be done about it.”

"She's about as far from smart as anybody can possibly be!"

Retired ICE director Tom Homan absolutely eviscerates AOC for her "dangerous" & "idiotic" attacks. She encouraged folks to tip each other off during ICE raids, which ends up protecting, in many cases, violent criminals. pic.twitter.com/IlNOK4isI8

Vanity Fair said that Ocasio-Cortez’s people were  annoyed that the Sanders campaign would dare call them out after “all they’d done for Sanders.”

“And AOC’s team is also said to have had concerns about radio host Joe Rogan’s controversial unofficial endorsement of Sanders,” Vanity Fair added. “The Thursday before Ocasio-Cortez’s whirlwind tour of Iowa, Sanders tweeted a video clip of Rogan in which the libertarian-leaning host and comedian said he would ‘probably vote for Bernie.’”

Thanks AOC for protecting drug dealers, MS13, and sex traffickers and not allowing ICE to deport them after their prison sentences, releasing them back into our population.

The folks at Teen Vogue are at it again, and this time they’re talking specifically about The Heritage Foundation. We...