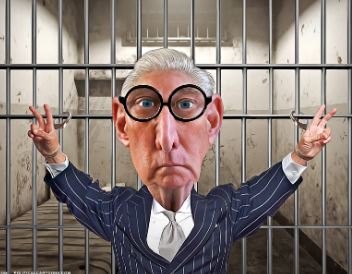 Demon Judge Amy Berman Jackson sentenced Roger Stone to 3 years and 4 months in prison and a $20,000 fine on Thursday.

Roger Stone’s gag order was still in place after Judge Jackson handed down his sentence so he was silent and didn’t take any questions from reporters.

STONE unusually quiet after sentence. Asked if he will speak to reporters, said, 'No. I have nothing to say.' No change to gag order yet that we know of…prosecution also declined comment. Case isn't over yet w juror related motion pending…

Jackson deferred execution of Stone’s sentencing giving him a chance to appeal for a new trial.

Corrupt Obama-appointed Judge Amy Berman Jackson was snarky and angry in court as she prepared to hand down Roger Stone’s sentence.

Roger Stone was previously convicted by a biased jury on all 7 counts of lying to Congress, obstruction of justice and witness tampering.

The lead juror on Stone’s case was a Trump-hating Democrat activist who previously attacked Roger Stone on Twitter.

How is this a jury of Stone’s peers?

In apparent vague reference to President Trump and other critics, Jackson says she is bound to consider sentencing guidelines, and am bound to craft a sentence that is appropriate to the crime.

After Judge Jackson came back from a break, she told the court, “Unsurprisingly, I have a lot to say,” and she went on a crazy tirade, ripping Roger Stone to pieces, accusing him of covering up for President Trump!

Angry Jackson said people should be disgusted with Roger Stone for his actions.

More Jackson, getting angry, saying revulsion for Stone's conduct should 'transcend party.' Judge: 'The truth still matters. Roger Stone’s insistence that it doesn’t his pride in his own lies are a threat to the very foundation of this democracy.'

Jackson: Stone reached out to then-Trump campaign chief Paul Manafort regarding WikiLeaks, "I have an idea to save Trump's ass," Stone wrote.

Jackson says Stone knew he could not take the 5th before Congress without hurting the Trump campaign, "so he lied, and then made efforts to make sure the lies were not exposed."

President Trump hinted he would pardon Roger Stone Wednesday night when he tweeted a video of Tucker Carlson calling for Stone to be pardoned.

In Case You Missed It:  Japan discovers "magnetic" substance in Pfizer covid vaccines; journalists start DYING from the vax they pushed
Posted in Freedoms and tagged deep state, Spygate.

by Cristina Laila US Attorney from Connecticut John Durham has interviewed several FBI investigators who worked on Mueller’s team, according...