One of the recurring themes by Democrats throughout the impeachment farce was that President Trump was a “threat to our national security” and “must be removed from office NOW!” That was a familiar refrain of the execrable Jerry Nadler (D-NY), alias “Oliver Hardy,” who got that ball rolling in a 15 December interview with Democrat hack George Stephanopoulos: ““He is openly seeking interference in the 2020 election and he poses a continuing threat to our national security and to the integrity of our elections to our Democratic system itself.”

Let’s look at the original sin of compromising US national security, as that culprit is easily identified, but first a definition is in order:

Original sin, in Christian doctrine, the condition or state of sin into which each human being is born; also, the origin (i.e., the cause, or source) of this state. Traditionally, the origin has been ascribed to the sin of the first man, Adam, who disobeyed God in eating the forbidden fruit (of knowledge of good and evil) and, in consequence, transmitted his sin and guilt by heredity to his descendants.

A US president who truly compromised US national security was none other than one of the Democrats’ own – Bill Clinton. His corrupt actions in the mid-1990s – for which he was never held accountable – resulted in the transfer of US technology to China in exchange for campaign contributions from a host of Chinese-connected individuals. One could further argue that the real original sin of compromising US national security began with Slick Willie, who passed it down to his successors, in particular Barack Obama.

Recently, independent researcher Jack Cashill, who has seemingly made a career of investigating the Clintons and Obama, summarized some of Bill Clinton’s national security transgressions from the ‘90s. Here is an excerpt:

But those were just symptoms of the problem. Bill Clinton’s policy actions were the real culprits that laid the foundation for the corruption that followed. Clinton set in motion the technology transfers that turned the Chinese military – especially its space and ISR capabilities – from a second-rate to a front-line capability in less than a generation, as excerpted here.

Broadly speaking, there were two catastrophic decisions Clinton made in 1993 that ended up eroding the long-term American defense posture. The first was to radically break from the post-World War II trading system. This system was organized around free trade of goods and services among democratic nations, along with somewhat restricted financial capital flows. He did this by passing NAFTA, by bailing out Mexico and thus American banks, by creating the World Trade Organization, and by opening up the United States to China as deep commercial partners

The Clinton framework gutted the ability of U.S. policymakers to protect industrial power, and empowered Wall Street and foreign officials to force the U.S. to export its industrial base abroad, in particular to China. The radicalism of the choice was in the intertwining of the U.S. industrial base with an autocratic strategic competitor. During the Cold War, we had never relied on the USSR for key inputs, and basically didn’t trade with them. Now, we would deeply integrate our technology and manufacturing with an enemy (and yes, the Chinese leaders saw and currently still see us as enemies).

The second choice was to reorganize the American defense industrial base, ripping out contracting rules and consolidating power into the hands of a small group of defense giants. In the early 1990s, as part of the ‘reinventing government’ initiative, the Clinton team sought to radically empower private contractors in the government procurement process.

[T]hey didn’t notice or care that the Chinese Communist Party was centralizing production in China. They just assumed that Chinese production was ‘the free market’ at work, instead of a carefully state-sponsored effort by Chinese bureaucrats to build strategic military and economic power.

Why would Clinton implement these disastrous policies that benefited the ChiComs? For campaign contributions from Chinese bundlers, of course!

One of my many pals explained to me that in October 1996, a classified “Sense of the Intelligence Community” memorandum was produced that examined Chinese influence in US elections at the time. (A “Sense of the IC” document is sort of a National Intelligence Estimate, but nevertheless very powerful consensus.) The ChiCom government had reportedly set aside something like $100 million to pay for direct and indirect influence in the 1996 presidential and congressional elections. The document apparently stated that the trail of corruption “leads to the highest levels of the US government.”

How much do you suppose that $100M bought, and where did all the money go? The Chinese (and other foreign) interest was in both parties, but they all definitely seemed to go with the Democrats as likely winners since Clinton was an incumbent in 1996. Some of the money also was likely passed via cut-outs to the campaigns of chairmen of key committees in Congress that affected US policies with China in order to grease the skids for technology transfers from the US to China.

For obvious Deep State political reasons, nobody seems to have leaked that document to the media, despite its jaw-dropping significance (not that anyone in the legacy media would have likely have even mentioned it!). Let’s look at what we do know from the public record.

There were all kinds of Chinese cash donations to them in the 1990s.  Start with “Chinagate”: “The scandal was an apparent scheme by the Clinton administration to sell seats on taxpayer-funded trade missions in exchange for campaign contributions to the 1996 Clinton-Gore campaign.” Details are provided at this link and excerpted below:

~ Clinton friend Yah Lin “Charlie” Trie pleaded guilty to charges of violating campaign finance rules in exchange for having pending indictments dropped against him in Washington and Arkansas.

~ According to news reports in 1997, Democratic donor Johnny Chung received a $150,000 transfer from the Bank of China three days before he handed then-First Lady Hillary Clinton’s chief of staff a $50,000 check.

~ Johnny Chung first met the Clintons in 1992. From 1994 to 1996, Chung visited the White House 49 times. Nearly half of those visits were authorized by the office of the First Lady. In one visit, Hillary met with Chung and his visiting delegation of Chinese businessmen from state-run companies.

~ Liu Chaoying was the daughter of General Liu Huaqing (1916-2011) who arranged to give businessman and ally of the Clintons, Johnny Chung, $300,000 which was then donated to the DNC. The DNC was later forced to return the money.

~ President Clinton admitted in 1997 that he invited major campaign donors to spend the night in the White House. The Clintons hosted 404 overnight guests.

~ During the investigation by the Department of Justice, about 120 people connected to “Chinagate” either fled the country or pleaded the Fifth Amendment to prevent testifying.

What did the Chinese get from their purchasing of the Clintons (never forget that Bill and Hillary are a team)?

The Chinese went from virtually no space capability in the early 1990s to near-parity with the US in a single generation. Those actions by Clinton started the avalanche of tech transfer to China, with a 2018 report that the US could be losing its military tech edge to China within two years – which would be this year! 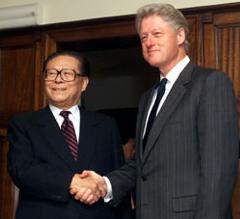 If the above actions by Clinton didn’t “compromise US national security,” then nothing did. And Clinton got away with it all because the political class was focused on his sexual perversions and impeachment trial at the time. It is Clinton who should have been impeached for compromising US national security; certainly not President Trump! The fact that he got away with it all set the table for similar transgressions by Barack Obama. That is the real consequence of justice denied: the original sin is transmitted to others.

Keep everything in this article in mind the next time you hear anyone in the Democrat-media complex make a false claim that President Trump is a threat to US national security. The original sin of compromising US national security was committed by Bill Clinton – in spades.

Blagojevich: Obama “Began the Whole Conversation” About His Vacant Senate Seat and Sent a “Middleman” to Me