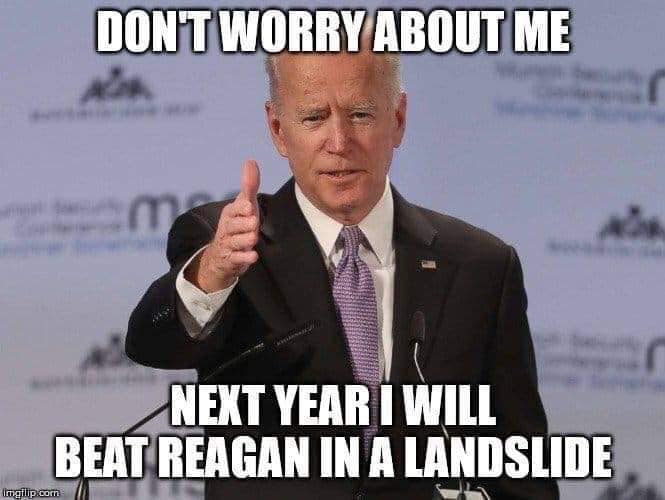 Joe Biden’s Biggest Gaffe Yet, Could End His Run For Presidency.

Democratic presidential candidate Joe Biden has raised concern after he delivered a confused campaign speech in South Carolina, saying he was a “candidate for the United States Senate” and that people could “vote for the other Biden” if they did not like him.

His speech at the First in the South Dinner on Monday came ahead of the presidential primary in the state on Saturday.

A video of Mr Biden’s speech shared widely on social media showed him saying: “My name is Joe Biden. I’m a Democratic candidate for the United States Senate. Look me over, if you like what you see, help out. If not, vote for the other Biden.”

This is so sad.

Here @JoeBiden says to the crowd in South Carolina that he is "running for the United States Senate" and that if they don't like him they can "vote for the other Biden."

I honestly wish he would've retired & not subjected himself to the rigors of this campaign. pic.twitter.com/mygFnsrdjC

It appears Biden was Sundowning , this is a symptom of Alzheimer’s disease and other forms of dementia. It’s also known as “late-day confusion.” Bidens confusion and agitation may get worse in the late afternoon and evening. In comparison, his symptoms may be less pronounced earlier in the day.

This is not the first time Biden has been confused.  Biden mistakenly claimed on Monday that he worked on the Paris Climate Accord with former Chinese leader Deng Xiaoping, who died more than 20 years before its signing.

In Case You Missed It:  Joe Biden facing increased scrutiny over his record on busing and racial issues.

Biden made that gaffe while citing his accomplishments in President Barack Obama’s administration.

Joe Biden claimed tonight that he worked with Chinese leader Deng Xiaoping on the Paris Climate Accord.

Except the current Chinese President is Xi Jinping.

Deng Xiapoing left office in 1992 and has been dead for 23 years. pic.twitter.com/ddEAmPhkZi

Biden also made and wild claim that while on a trip to South Africa years ago, he has said, he was arrested as he sought to visit Nelson Mandela in prison.

“This day, 30 years ago, Nelson Mandela walked out of prison and entered into discussions about apartheid,” Biden said at a campaign event in South Carolina last week. “I had the great honor of meeting him. I had the great honor of being arrested with our U.N. ambassador on the streets of Soweto trying to get to see him on Robbens Island.”

Four Pinnochios for Joe Biden’s “ridiculous” claim that he was arrested while trying to visit Nelson Mandela in prison.
https://t.co/z8v4DosHFu

It’s honestly cruel to keep Biden out on the campaign trail. He’s obviously struggling, and he is certainly not capable of being anything more than a figurehead president. His family & friends should be urging him to quit. https://t.co/sWnsWeIkvJ

Biden’s confusing comments come as Democrat primary candidates are scheduled to debate in Charleston Tuesday evening. The former vice president faces increasing pressure to give a standout performance as his “firewall” in the Palmetto State crumbles in the face of a surging Sen. Bernie Sanders (I-VT). The Vermont senator is fresh off a decisive victory in Nevada caucuses on Saturday. Earlier this month, he placed first the New Hampshire primary and won the popular vote in Iowa. In a survey released Monday, the Public Policy Polling outfit said Biden leads South Carolina with 36 percent of support and Sanders is in second at 21 percent.

In Case You Missed It:  How Extended COVID-19 Lockdowns Pose a Serious Threat to Mental Health

It’s hard to watch Biden gaffe so badly. He’s under a lot of pressure and it does appear that something is wrong. Maybe Ingraham’s advice should be taken by  family, friends and Democratic colleagues.

They should say, “thanks Joe, but maybe you need to sit this one out and get on some cholinesterase inhibitors.

Most people don’t understand the extent to which the Border Patrol and other law enforcement become humanitarian and first-aid responders...