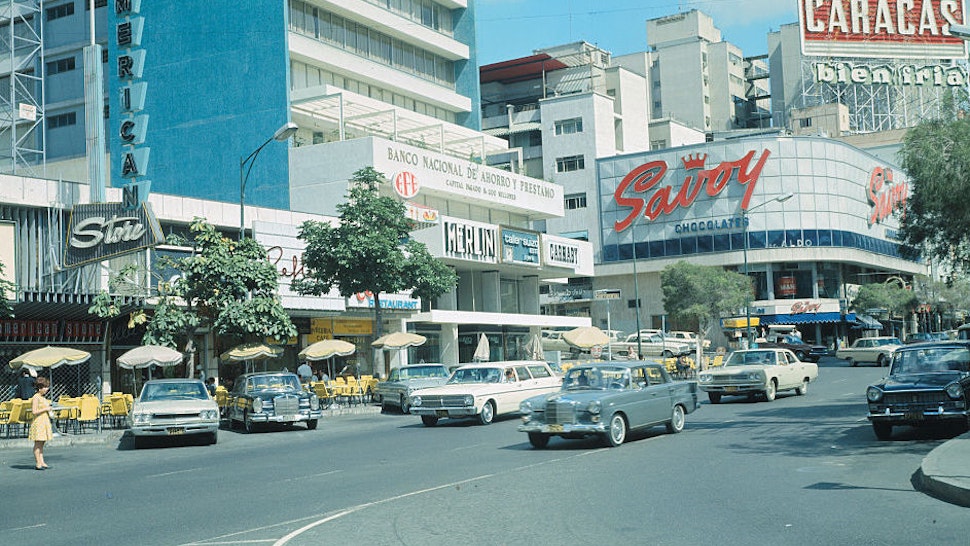 By  Daniel DiMartino
It was February 7, 1956 when the Vera Cruz Vessel sailed from the port of Vigo in northern Spain. Among its 800 passengers was my grandfather, Vicente Novo. Like everyone on that ship, he left everything behind in his homeland to pursue his dreams in a more prosperous country. In this land of opportunity, he and the other passengers found jobs, started businesses and raised families – all while sending money back to their hungry families in Europe.
But this newfound land of opportunity wasn’t the United States of America. It was my home country: Venezuela.

It’s hard to believe now, but in 1950, Venezuela was the fourth-richest country on earth. Tragically, over the course of the next six decades, Venezuela was transformed from a prosperous nation of immigrants to a devastated and poor land full of people in need of refuge.

Vicente hadn’t even finished elementary school when he immigrated to Venezuela. Yet, in that thriving nation, he found a job in a car garage that allowed him to save and send money back to his five siblings in Spain. And after years of diligently saving, he opened his own small parking garage, where he washed and parked cars.

My grandfather and the other voyagers on the Vera Cruz were not alone. From the 1940s through the 1970s, Venezuela was the destination of millions of immigrants from Spain, Portugal, Lebanon, Syria, and a host of other nations. Just like America, Venezuela became a thriving melting pot, and middle-class status was achievable for those who worked hard for it – even if they had no education.

This prosperity was possible thanks to free markets. Venezuela protected private property, had low taxation, and little regulation. Venezuela’s borders were open for immigrants who came to work, and foreign investment was welcomed, leading to a booming economy. All of this happened under an otherwise authoritarian dictator, Marcos Pérez Jiménez.

However, after Venezuela became democratic in 1958, the people elected leaders who put the country on the path of socialism.

In 1976, then-President Carlos Andres Perez nationalized the oil industry, and Venezuela’s oil production plummeted by more than 40% over the next decade. Oil nationalization led to the expansion of welfare programs funded by the new volatile oil revenue. Despite this additional government revenue, the government kept getting in debt and started printing more money to pay for more welfare. This led to inflation and the establishment of price and currency controls, as well as the nationalization of key industries. That, in turn, led to joblessness and misery. Venezuela’s real wages declined and GDP per capita, which had been soaring since the 1950s, plateaued in the 1980s and 1990s.

My grandfather was a victim of these policies. His parking garage wasn’t profitable anymore because the government capped parking prices. Thankfully, though, he had been saving. With that money, he built a small four-apartment building where he lived and rented the other three units. But the government had to ruin this for him, too. It used eminent domain to expropriate his building under the excuse that it needed to build a hospital. Not only did the government give my grandfather a below-market rate, it never even built the hospital.

In the late 1990s, politicians were forced to apply free-market policies by the International Monetary Fund. They welcomed private investment in the oil industry, re-privatized some industries they’d taken away, demolished price and currency controls, and even balanced the budget. As a result, the economy improved, unemployment stabilized, inflation slowed rapidly, and oil production surged. But this proved to be too little too late.

By the time election season rolled around, two years after these reforms, jobs were still scarce – and the Venezuelan people were outraged at the rampant corruption among establishment politicians. So, in 1998, Venezuelans elected Hugo Chávez, a radical socialist candidate who promised to crush the wealthy and redistribute oil and wealth to the poor by giving “free” housing, healthcare, education, and food.

My grandfather remembers folks saying that “Venezuela isn’t Cuba,” as they dismissed warnings from wise citizens who said that Chavez’s socialist policies would usher in destruction.

Indeed, Chavez doubled down on crushing business through regulation, price and currency controls, and nationalizing companies. His policies, and those of the current dictator Nicolas Maduro, have caused the greatest humanitarian crisis in the history of the Western Hemisphere. Nearly 5 million Venezuelans have fled the country already, including my family.

There’s a saying in Venezuela that before socialism took hold of our country, “We were rich but we didn’t know it.” Many Venezuelans who initially supported socialism and those who didn’t vote at all have now recognized that truth the hard way.

My family’s story, and that of millions of other Venezuelans, should serve as a warning to all those who believe America is too prosperous and powerful to fail. Socialism can and will destroy this country – unless voters curb the recent wave of popularity it’s gained in the United States and prevent radical leaders from getting elected.

The next time someone tells you that “America isn’t Venezuela,” remind them that we Venezuelans once said something all-too similar.

Daniel Di Martino (@DanielDiMartino) is a research associate at the Institute for the Study of Free Enterprise at the University of Kentucky, a Young Voices contributor, and a Dissident contributor.

In Case You Missed It:  Report claims CIA is directing sabotage attacks inside Russia via a major NATO ally
Posted in Freedoms and tagged Economy, Immigration, Socialism, Venezuela.

In October 2009 Barack Obama declared the H1N1 a national emergency. But this was not before millions of Americans were...