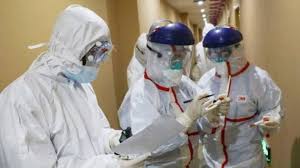 If COVID-19 (scientifically known as SARS-CoV-2) had started in Singapore or Taiwan, it would have traveled the world, infected billions of people, killed millions, and there wouldn’t have been a single peep about it.  “But it kills people,” you cry.  That is what cold and flu do, especially to the elderly and those lacking basic medicines.  The world is panicking over a virus that causes mild colds in the vast majority of cases.  Amid the panic, China is profiting as it buys up stocks at bargain-basement prices.  Instead of engineering a pandemic, did China engineer pandemonium?

Before pandemonium, science.  Sudden Acute Respiratory Syndrome (SARS) is characterized by the sudden (within a day or two) development of severe viral pneumonia with a thick mucus that is difficult to treat.  SARS is strongly associated with two strains of coronavirus (SARS-CoV and now SARS-CoV-2).  The pathogenesis of SARS is supposed to go something like this: Day 1: infection with SARS-CoV or SARS-CoV-2.  Day 2: coughing and wheezing for breath.  Day 3: hospitalization on a ventilator.  Day 4: death.  Over 99% of COVID-19 cases have experienced nothing even remotely similar to SARS.  Is SARS-CoV-2 a bunch of hooey?

There are over 200 viruses that cause the common cold.  Among those are several strains of coronavirus, with a new strain discovered every few years.  Discovery occurs when a lab technician sequences a virus (a rather rare event) and submits to GenBank a previously unpublished sequence.  The newly discovered virus could have been endemic for millennia.  Science makes mistakes, and a lot of scientists can make a lot of mistakes, especially when rushing.  Assuming that the multitude of partial genetic sequences for COVID-19 are genetic sequences for COVID-19, and assuming that the multitude of rapidly developed (and poorly validated) tests for COVID-19 are specific for COVID-19, then COVID-19 rarely leads to SARS.  COVID-19 is a newly identified strain of coronavirus that causes the common cold, and although newly discovered, it could have been endemic for centuries.

We fill nursing homes with elderly on their last legs, where they are tended to by orderlies, until one of those orderlies comes to work with a little bit of a runny nose.  “Would you like us to make them comfortable?” is a code phrase for “Would you like us to continue fluffing their pillows while they choke to death from pneumonia and their minds melt from fever?”  Medicine is withheld as they die a natural death from pneumonia indistinguishable from SARS.  Even the young and healthy can die from a cold.  Absent medicines, such as aspirin, decongestants, and expectorants, death from fever, secondary infections, diarrhea, and viral pneumonia is a real possibility.  The common cold would be 100 times more deadly without medicine, just as in the past.

This brings us to China, where an advanced socialized medical system is much like the nursing home: no medicine at all.  People reported to hospitals because their common colds were a little more severe than usual.  Perhaps their fevers were unresponsive to the medicines they obtained at the local drugstore, which may not have contained any medicine (1,2,3,4,5).  With so much manufactured in China, you might have paid $300 for a bottle of cornstarch pressed into pills; [insert big-name pharma company here] thanks you.  At the hospital, many patients in Wuhan were carefully evaluated for their worth to society and then led to benches in the halls upon which they could sit while their fevers and coughs got worse and they were otherwise ignored.

Meanwhile, the Chinese are profiting immensely from the fire sale, as though they were prepared for it (6,7,8,9,10).  Also consider that China owns large portions of our media companies, and China virtually controls the World Health Organization (WHO).  When this thing started, Trump offered aid to China in the form of virology experts and medicines, but China refused that aid, insisting that everything be done through the WHO.  The WHO assisted in the hype by calling something that looked like a common cold, once it got out of China, a “pandemic.”

Were the people of Wuhan suffering from a new SARS, the ravages of a common cold exacerbated by socialist medicine, or nothing at all?  COVID-19 rarely causes SARS outside China, so it must be the last one.

Did the Chinese government attempt to cover up the embarrassment of its socialized medicine or fabricate a deadly outbreak to panic the world?  Has our scientific arrogance erroneously blamed this on an innocuous common cold, possibly endemic in much of the world, or have we been maliciously misled by the Chinese-controlled WHO?  Was it to cover the embarrassment or advance the fabrication?  Did China orchestrate the media hype, or was it the normal Trump-hate of fake news?  Did the Chinese start a fire sale, or were they well positioned by happenstance?

As COVID-19 turns into an expensive exercise in tracking the progression of a common cold, the Chinese are grinning, but will they smile for long?  The China Model was already collapsing, and the companies and wealth they gained through trickery and deceit have been declining from poor management.  The world is waking up: China was a deal too good to be true, and we need to get out of it before the ineptness and malice of socialism take us all down.

Posted in Science and tagged China, Coronavirus, Made in China.

Spain is one of the European countries struggling to stop the spread of coronavirus, also known as COVID-19. Right now,...