The outbreak could later have some positives to nationalists and cultural protectionists, and it is likely to have a long-term impact on the free movement of people and goods. 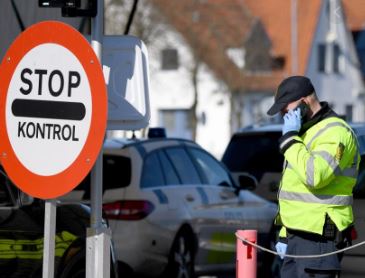 Asylum seekers and illegal border crossers will be turned away from the United States and returned to Mexico or (Canada as the case may be) under a proposed policy change because of the Wuhan coronavirus COVID-19 pandemic, several news sites are reporting.

The Trump administration plans to immediately turn back all asylum seekers and other foreigners trying to cross the southwestern border illegally, saying they cannot risk allowing the coronavirus to spread through detention facilities and among Border Patrol agents, four administration officials said on Tuesday.

All sorts of businesses have suddenly realized the risks of relying on complex global supply chains that are specific not just to China—but to particular places such as Wuhan, the epicenter of the pandemic. China has blocked US companies in China from shipping supplies such as masks to the US. Laws will have to be put in place to make sure minimum essentials are made in the USA again.

Meanwhile, governments have rushed to impose travel bans, additional visa requirements, and export restrictions. The travel ban on most arrivals from Europe that U.S. President Donald Trump announced on March 11 is particularly broad, but far from unique. All of this is making economies more national and politics more nationalistic.

The coronavirus crisis is likely to have a lasting impact, especially when it reinforces other trends that are already undermining the bad idea of globalization. It will deal a blow to fragmented international supply chains, reduce the hypermobility of global business travelers, and provide political fodder for nationalists who favor greater protectionism and immigration controls.

The complex China-centered global supply chains on which so many Western companies have come to rely are particularly at risk. The cost advantage of producing in China has eroded in recent years as the country has become richer and wages have soared. The risks of doing so were highlighted by President Trump’s imposition of punitive tariffs on imports from China in 2018 and 2019, leading businesses to scramble for alternatives.

While the January deal marked a fragile truce in the U.S.-China trade war, the perils of producing in China remain; both Democrats and Republicans increasingly view China as a long-term strategic rival that needs to be contained. And no sooner had the trade war abated than the coronavirus intervened. The extended shutdown of many Chinese factories has pushed exports down 17 percent in the first two months of the year compared with a year earlier, and it has disrupted the production of European cars, iPhones, and other consumer goods.

The coronavirus crisis could mark a tipping point that prompts many businesses to remodel their supply chains and invest in more resilient and often more local patterns of production.

One option is to shift and diversify operations across other Asian economies, such as Vietnam or Indonesia. Another is to shorten supply chains, with U.S. companies moving production to Mexico and European ones to Eastern Europe or Turkey. A third is to invest in robots and 3D printing within advanced economies, producing locally closer to consumers.

Now, whether because of government bans, business decisions, or individual caution, all but the most essential international travel has been canceled, and those who can work from home are increasingly staying put.

Thanks to this forced grounding, businesses may discover that while face-to-face meetings are sometimes necessary, technological alternatives are often just fine—and also much less costly, time-consuming, and detrimental to family life. And at a time of increasing concern about the impact of airplane emissions on the climate, and with many businesses keen to highlight their commitment to environmental awareness and sustainability, there is both an environmental reason and an economic one why business travel may decline.

The coronavirus crisis could favor nationalists who seek greater immigration controls and protectionism of local cultures and customs.

The speed and scope of the virus’s spread across the globe have spotlighted people’s vulnerability to seemingly distant foreign threats. The coronavirus has not just spread to global hubs such as London and New York. It has also leaped directly to provincial cities such as Daegu, South Korea’s fourth-largest city; nursing homes in the suburbs of Seattle; and even small towns such as Castiglione d’Adda (population: 4,600)—one of the 10 towns in Lombardy first quarantined by the Italian government in February.

Even many ostensibly liberal governments are seeing the reality, and have slapped restrictions on travel and trade more “draconian” than even Trump dared impose at the height of his conflict with China last year.

Jacinda Ardern, New Zealand’s leftist prime minister, was smart and quick to bar travelers from China who are not New Zealand citizens from entering the country. Such bans it turns out will saves lives.

Even within the European Union’s ostensibly barrier-free single market, France and Germany have banned the export of face masks; so much for the liberal internationalism and commitment to the EU of President Emmanuel Macron and Chancellor Angela Merkel. More shocking still is that none of the 26 other EU governments has responded to Italy’s urgent appeal for medical assistance—though China has. Every man for themselves in the end!

Even within the European Union’s ostensibly barrier-free single market, France and Germany have banned the export of face masks; so much for the liberal internationalism.

It has heightened the reality that open borders that are a threat. It underscores that countries in crisis can’t always count on their neighbors and close allies for help. And with India limiting exports of life-saving drugs from its vast pharmaceutical sector, it provides justification to those who wish to localize production of all sorts of products on national security grounds. More broadly, it may strengthen those who believe in strong government, prioritizing societal needs over individual freedom, and national action over international cooperation.

As a result, the corona virus crisis will usher in a less globalized world. Once the pandemic and panic abate it will be proven liberal ideas are failures, if we cannot see the reality, nature will show us!

In Case You Missed It:  China buying up the world's GOLD supply in preparation for new world reserve currency designed to END the DOLLAR
Posted in Freedoms and tagged China, Coronavirus, globalism, Made in China.

The CDC Was Fighting Racism & Obesity Instead Of Stopping Epidemics

Authored by Daniel Greenfield via Sultan Knish blog, The Centers for Disease Control has a $6.6 billion budget and one...