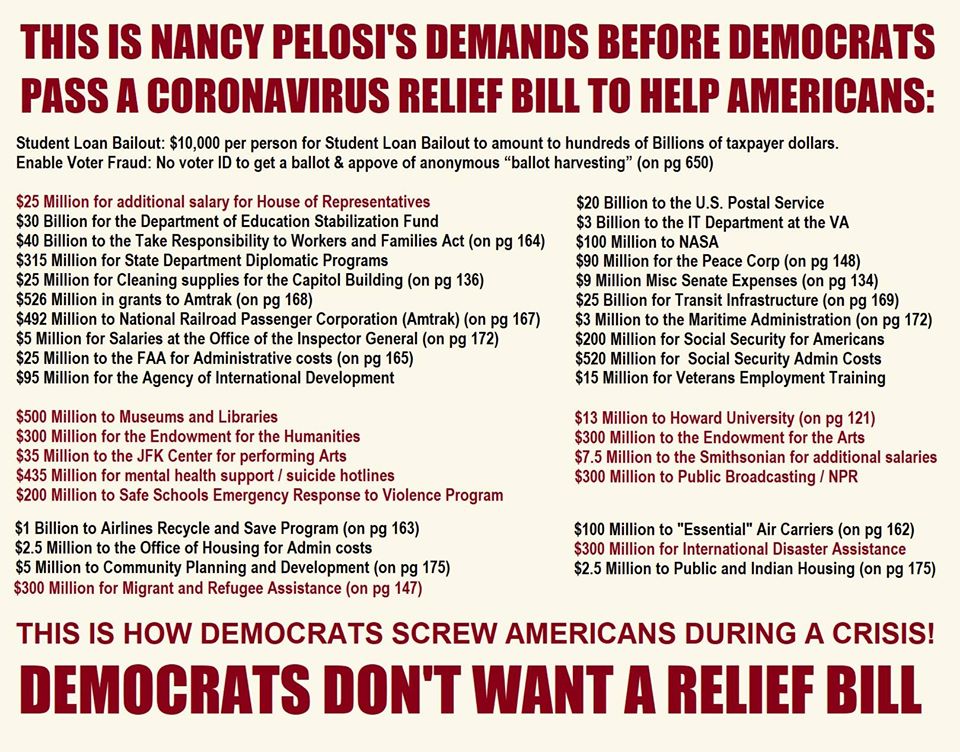 Lindsey Graham taking to the Senate floor and calling for an immediate end to negotiations because he said Democrats were “nickel-and-diming at a time when people are dying — literally dying.”

Graham’s late-night remarks came after tensions seemingly had cooled in Congress during the day, sending the Dow Jones Industrial Average to its highest point gain in its history as leaders from both parties signaled that an agreement could be within reach. Futures were down Tuesday night.

“In case you’re watching,” Graham said in reference to the president, his voice rising, “tell [Treasury Secretary] Steven Mnuchin to come back to the White House and end negotiations.

I think I understand the give-and-take of life and politics, but I’ve been called by two good friends on the Democratic side in the last five or six hours wanting more money. End the negotiations.

He added: “This bill is $2 trillion. There’s a ton of money in this bill for people who need it, but what we’re doing now is, every special-interest group in town is trying to get a little bit more.”

Monday had been marked with furious debate on the Senate floor, as Republicans accused House Democrats of proposing an alternative stimulus bill that was full of unnecessary progressive wishlist items.

Republicans, including the president, have called the measures “nonsense” nonstarters.

After Democrats signaled they might be willing to negotiate away some of their proposals, though, the Dow surged Tuesday to its highest point gain in history, and lawmakers appeared more optimistic.

This is ridiculous,” Graham continued Tuesday night. “Steven Mnuchin has done a good job. I appreciate his efforts to negotiate a bill that will help America. Senator [Mitch] McConnell says we’re on the two-yard line. I believe the problem is that there are 20 people playing defense, and we need to take some people off the field. What bothers me is that at that late hour, I’m still getting calls from people wanting more money.”

“I have lost my patience with the political process,” Graham added. “We’re being nickel-and-dimed now. The big stuff we’ve got pretty well right, and if it’s not perfect, we can fix it later. But, we need to vote tonight, and the reason I’m on the floor is because I’ve been called by two Democratic colleagues in the last five or six hours wanting more money. The store is closed. Mr. President, end negotiations. Require us to vote. Draft the bill, do it tonight.”

Graham’s frustration was matched by many of his colleagues. Louisiana GOP Sen. John Kennedy told Fox News’ Sean Hannity late Tuesday that while the coronavirus “can kill you,” so can “hunger.” He accused Pelosi of demolishing a Senate compromise bill with her own legislation.

However, it’s highly unlikely the bill could see a vote Tuesday night, given that lawmakers have not even finalized the text. A Thursday or Friday vote in the House of Representatives appeared possible. But, because many House lawmakers have not been in Washington, that process likely would involve a voice vote with a skeleton crew, essentially requiring unanimous consent — meaning just one House member could kill the vote.

Shortly before Graham spoke, Trump declared at a coronovirus task force briefing that the country was nearing “the end of our historic battle” with “the invisible enemy” of coronavirus.

Trump’s approval numbers hit their highest point ever this week, with 60 percent of Americans approving of his coronavirus response efforts.

The president also sounded an unexpectedly magnanimous note: “I also want to thank Congress, because whether or not we’re happy that they haven’t quite gotten there yet, they have been working long hours. I’m talking Republicans and Democrats, all of them, the House, the Senate. I want to thank Congress because they are really trying to get there, and I think they will.”

Then, Director of the U.

S. National Economic Council Larry Kudlow specifically said the new coronavirus bill working its way through congressional gridlock would total $6 trillion: $4 trillion in liquidity from the Federal Reserve and $2 trillion in new money. Typical annual appropriations from Congress in a given fiscal year are around $1.2-4 trillion, with total expenditures roughly $4.3 trillion.

A chief line of attack during the coronavirus crisis from former Obama administration officials and leading Democrats is that President...