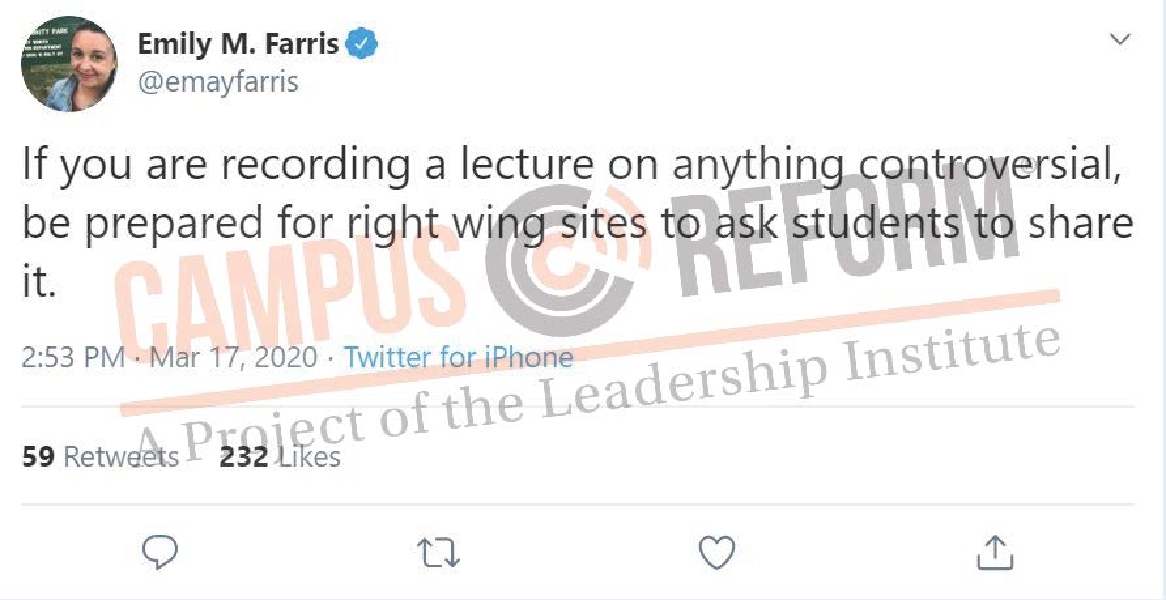 Leftist Professors  are taking to social media to express their concern over being forced to deliver their course lectures online amid the coronavirus outbreak, sharing with each other tips on how to limit the number of people who are able to see what they’re teaching students, and criticizing “right wing sites” and even Campus Reform, specifically. Leftist professors do not want their leftist misleading biased to be exposed, and fact checked.

Texas Christian University Associate Professor of Political Science Emily Farris tweeted Thursday, “if you are recording a lecture on anything controversial, be prepared for right wing sites to ask students to share it.” Campus Reform reached out to Farris via Twitter Direct Messaging to allow her the opportunity to further explain her comments or to clarify. She later blocked the author of this article on Twitter.

LaSalle University Assistant Professor of Public Health Christen Rexing replied to Farris’ tweet, asking why others could find topics such as “gun safety, women’s health, elections, etc.” to be “controversial, as they are “evidence-based.”

“Seems like the flood gates could open,” Rexing commented in response to courses moving online.

University of North Carolina political science graduate student Stephanie Shady also weighed in, saying, “Annnnd I just realized that the second half of my course focuses on public opinion towards and politicization of immigration. This will be interesting.” Another user with the Twitter name “Prof CWO” replied “Sigh, I teach about white nationalism and this has been my biggest fear since we began transitioning to online instruction.”

“If Campus Reform harasses you or someone you know, the best response is to ‘follow the money.’ Campus Reform receives $1.4 million from the Leadership Institute, a Koch-funded organization designed to delegitimize academics they consider too left. They are not a new [sic] source,” Kamola tweeted.

A user whose website says they are a history professor at a “community college in North Texas” wrote, “I’m taking steps to limit this but nothing is foolproof.”

Farris asked how Gunter was working to ensure her lectures are not made public and fact checked, to which Gunter responded with one tip for her colleague.

“Instead of posting videos direct to LMS (which would then own them) I’m posting links to the videos on youtube. The videos themselves are ‘unlisted’ meaning you can’t find them in a search or if you go to my page-only if you have the direct link. Doesn’t stop link sharing though,” Gunter said.

Campus Reform exposes the liberal bias and abuse against conservatives on America’s colleges and universities.

As a Campus Reform reader, you know about the abuse taking place at our nation’s higher education institutions, and you know how important it is to bring these stories to light.

Campus Reform depends on the financial support of concerned Americans like you to report on leftist indoctrination on college campuses and uncover the blatant misconduct of university administrators, faculty, and students.

In Case You Missed It:  Shipping workers warn of imminent global transport systems collapse
Posted in Freedoms and tagged Liberalism.