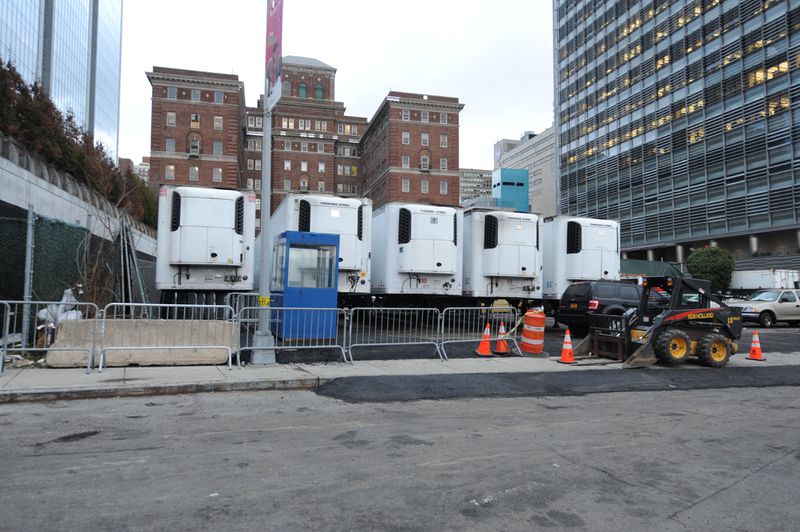 Refrigeration trucks are in place as workers build a makeshift morgue outside of Bellevue Hospital to handle an expected surge in coronavirus victims on March 25 in New York.(Sam Costanza/for New York Daily News)

The clip posted to Youtube shows medical staff using a forklift to load the bodies into the makeshift morgue truck outside the Brooklyn Hospital Center in Fort Greene, according to the man filming the video who did not identify himself. As the man shoots the surreal footage, he is heard saying, ‘This is for real. This is Brooklyn.

They putting the bodies in the 18-wheeler…this is no joke…this is Brooklyn Hospital…This may make you want to take this serious.’ As of Monday morning, New York has had just under 60,000 confirmed cases of Covid-19 and at least 965 deaths related to the outbreak, which has completely overrun hospitals and emergency services around the city.

With more than 954 deaths across New York State from complications of coronavirus, funeral homes have had to make changes to the way they do business. Bodies are being stored locally by some hospitals in refrigeration trucks on-site, including a massive morgue set up at Bellevue Hospital. It was unclear how many bodies were being stored there pending funeral arrangements, but officials have said they have added excess capacity for “worst-case scenarios.”

In Case You Missed It:  Law enforcement allowed Texas shooter to commit mass murder by BLOCKING parents from saving their children
Posted in Freedoms.

The Mortgage Bankers Association warned that the housing market could face a ” large-scale disruption,” due to actions by the...