(Natural News) A new study published in the journal Antiviral Research finds that Ivermectin, a common agricultural drug used as a de-wormer for cats, dogs, horses and livestock — achieves a 5000-fold reduction in replication of the SARS-cov-2 “Wuhan” coronavirus.

Ivermectin is sold at agricultural supply stores and online retailers such as Amazon.com. It’s normally sold as an edible paste or a sterile solution for injection into cattle and other livestock. The drug is FDA-approved for certain treatments, although not yet FDA approved for treatment of COVID-19. We are not recommending it for human consumption until more data are available.

The study, found here, is entitled, “The FDA-approved Drug Ivermectin inhibits the replication of SARS-CoV-2 in vitro.”

The abstract of the study describes the very strong potential of Ivermectin to inhibit viral replication in vitro. This was not a human clinical trial, of course, but the results make Ivermectin an immediate candidate for further study:

We report here that Ivermectin, an FDA-approved anti-parasitic previously shown to have broad-spectrum anti-viral activity in vitro, is an inhibitor of the causative virus (SARS-CoV-2), with a single addition to Vero-hSLAM cells 2 hours post infection with SARS-CoV-2 able to effect ?5000-fold reduction in viral RNA at 48 h. Ivermectin therefore warrants further investigation for possible benefits in humans.

Ivermectin is well known to exhibit strong anti-viral properties and is even documented to inhibit HIV replication. This is important to note, since the Wuhan coronavirus, an engineered biological weapon, uses HIV components as part of its infection and replication machinery. As described in the abstract:

Ivermectin is an FDA-approved broad spectrum anti-parasitic agent that in recent years we, along with other groups, have shown to have anti-viral activity against a broad range of viruses in vitro. Originally identified as an inhibitor of interaction between the human immunodeficiency virus-1 (HIV-1) integrase protein (IN) and the importin (IMP) ?/?1 heterodimer responsible for IN nuclear import, Ivermectin has since been confirmed to inhibit IN nuclear import and HIV-1 replication.

According to the published study, Ivermectin is known to inhibit the replication of:

“Essentially all viral material” was gone within 48 hours

Study authors describe how a single dose of Ivermectin achieved a 93% reduction of viral RNA was achieved within just 24 hours, with “essentially all viral material” gone in 48 hours.

At 24 h, there was a 93% reduction in viral RNA present in the supernatant (indicative of released virions) of samples treated with ivermectin compared to the vehicle DMSO. Similarly a 99.8% reduction in cell-associated viral RNA (indicative of unreleased and unpackaged virions) was observed with ivermectin treatment. By 48h this effect increased to an ?5000-fold reduction of viral RNA in ivermectin-treated compared to control samples, indicating that ivermectin treatment resulted in the effective loss of essentially all viral material by 48 h. 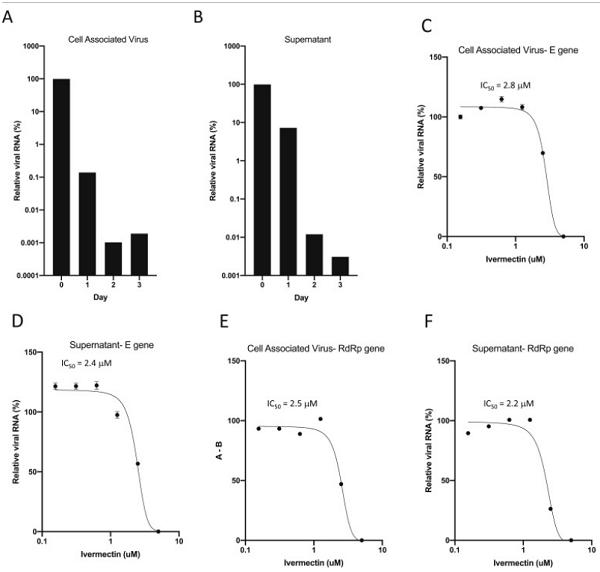 Furthermore, no toxicity was observed in the testing so far:

As we have observed previously no toxicity of ivermectin was observed at any of the timepoints tested, in either the sample wells or in parallel tested drug alone samples.

We now add Ivermectin to the list of candidates for low-cost, readily available treatments and possible cures

It’s criminal that Dr. Fauci and the Big Pharma establishment won’t talk about low-cost prescription drugs (like hydroxychloroquine) or simple nutritional supplements (zinc) that are available now and have a long track record of safe, effective use. Instead, they want the world to suffer and die while demanding we all wait for a vaccine that may or may not work.

In the context of this global pandemic, the active censorship of alternative treatments is nothing less than a crime against humanity.

Here are the drugs and nutrients we now list as the best candidates for urgent clinical trials, as these may turn out to be highly effective treatments or even cures for the coronavirus, especially in combination:

Note that two out of the five on the list are FDA-approved prescription drugs. With trillions of dollars being thrown around as bailout money, we aren’t we spending just a few million dollars to run clinical trials on these low-cost candidates?

The answer, of course, is money. Big Pharma wants to skim big money off the pandemic, and they can’t earn billions from off-patent, generic prescription drugs like hydroxychloroquine.

We are now watching the entire world be strangled to death by Big Pharma because they don’t want a natural substance or a low-cost drug to be the “hero” of this story. They want to roll out mandatory vaccines, which means they must suppress all other therapies until they have their vaccines ready (with the medical police state vaccine tracking chips installed on everyone, to boot).

In fact, I’ve written an article about how we can end the lockdowns right now and get everybody back to work by simply invoking four strategies to halt the spread of the virus.

Prime Minister Boris Johnson has been moved to intensive care in hospital after his coronavirus symptoms "worsened", Downing Street has...