On Sunday Dr. Anthony Fauci went on CNN and MSNBC and started to blame President Trump for his failures. 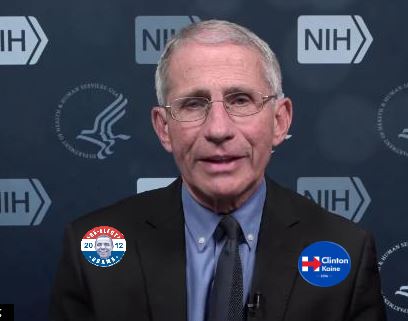 * Fauci went on CNN on Easter Sunday and suggested that President Trump should have shut down the country in February!

** Fauci later went on with Al Sharpton on MSNBC and and told Al Sharpton that he warned President Trump that “we were in real trouble” from the coronavirus.

Earlier today we reported on a list of several contradictory statements made by the good doctor.

Back on March 9 Dr. Fauci told Americans cruises were OK.

Dr. Fauci has been wrong nearly every step of the way.

Now Fauci wants to blame President Trump for his failures.

Jan: Fauci told us it was no threat to Americans

Feb: Fauci told us to continue going to gyms, malls, and the movies

He’s been wrong every step of the way and is now blaming @realDonaldTrump for his failures. #FireFauci

1.)  Dr. Fauci says he warned Trump in January that the US was in real trouble but that is not what he said publicly.

In January Dr. Anthony Fauci told Newsmax TV that the United States “did not have to worry” about the coronavirus and that it was “not a major threat.”

"This is not a major threat…"

WATCH ?: Dr. Anthony Fauci's original thoughts about the severity of the COVID-19 outbreak are revisited from a January interview with Newsmax TV's @gregkellyusa. pic.twitter.com/0KmHxxkeBp

2.)  Dr. Fauci warned of an apocalyptic coronavirus pandemic — then just weeks later he later compared the coronavirus to a bad flu.

3.) Dr. Fauci based all of his predictions on garbage IHME models that were OFF BY MILLIONS and then told reporters this past week, “You can’t really rely on models.”

4.) On March 20th Dr. Fauci jumped in and “corrected” the president during a press briefing on hydroxychloroquine treatment for coronavirus saying, “You got to be careful when you say ‘fairly effective.’ It was never done in a clinical trial… It was given to individuals and felt that maybe it worked.”

TRUMP: "No. It's no different, other than we need certain equipment." pic.twitter.com/gdbCtf6N9B

Exactly two weeks later hydroxychloroquine was deemed the most highly rated treatment for the novel coronavirus in an international poll of more than 6,000 doctors.

5.)  Dr. Fauci pushed these garbage models every step of the way.

6.)  On Sunday Dr. Fauci said President Trump should have shut down the economy in February.

The president was a bit pre-occupied in February with the Democrat impeachment sham.

That’s not what Dr. Fauci said ON FEBRUARY 29th!!

But in late February  Fauci told the TODAY Show on February 29 that you don’t need to “change anything you’re doing.”:

Sorry Fake News, it’s all on tape. I banned China long before people spoke up. Thank you @OANN https://t.co/d40JQkUZg5

In Case You Missed It:  Smoking gun: Fauci states COVID PCR test has fatal flaw; confession from the "beloved" expert of experts
Posted in Science and tagged prop.

The National Governors Association recently asked Congress for a bailout of $500 billion in addition to the more than $200...