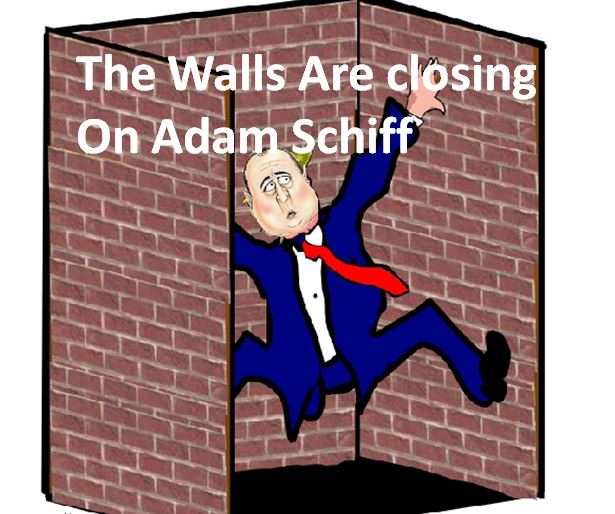 The transcripts in question pertain to the ‘Russian collusion’ investigation.

In September of 2018, the GOP-led House, with bipartisan support, voted to make public the transcripts of 53 witnesses in the bogus Russia probe.

Here we are 19 months later and the transcripts are still hidden from the public even though US Intelligence has declassified and cleared for release.

The reason? Adam Schiff has been able to keep dozens of transcripts hidden with his backroom dealings with the ODNI.

Schiff got to work hiding the transcripts as soon as the Democrats took over the House in the 2018 midterms and he took over as Chairman of the Intelligence Committee.

According to John Solomon, the transcripts contain exculpatory evidence for President Trump’s team and Schiff demanded they be kept from Trump and White House lawyers — even if the declassification process required the transcripts to be shared.

Shortly after Schiff took over from Republican Rep. Devin Nunes as chairman of the House Permanent Select Committee on Intelligence (HPSCI) in 2019, he sent a letter to the office of then-Director of National Intelligence Dan Coats.

The letter obtained by Just the News specifically ordered that the witness transcripts — some of which contained exculpatory evidence for President Trump’s team — not be shared with Trump or White House lawyers even if the declassification process required such sharing.

“Such transcripts remain the sole property of HPSCI, and were transmitted to ODNI for the limited purpose of enabling a classification review by IC elements and the Department of Justice,” Schiff added.

US Intel officials told John Solomon that Adam Schiff’s demand made it impossible for them to declassify 10 transcripts from White House and National Security Council witnesses, because White House counsel would have to look over them for what is known as “White House equities” and presidential privileges.

However, 43 of the transcripts were declassified and given permission to be publicly released, but they still have not been made public.

The dozens of transcripts are currently with Adam Schiff and his team in hiding despite the Committee’s vote to release them to the public.

Committee Republicans are also in the dark about the ODNI’s review of the 43 transcripts.

Schiff’s letter to Coats states that his staff was briefed earlier in March 2019 about how ODNI planned to handle the declassification, including the need for White House lawyers to review certain transcripts for information that could be covered by executive privilege.

It was that process that set off the alarm bells for Schiff’s team, the letter shows.

Republicans had hoped the witnesses’ testimonies would be released before the 2018 election so Americans could see some of the problems with the Russia probe and the false narrative of collusion that had been foisted on the public. That never happened, and the declassification efforts dragged into 2019, when Democrats took control of the House.

CNN's Chris Cuomo airs video of himself emerging from quarantine, although he was caught outside of his home prior. https://www.youtube.com/watch?v=J7oLjAAIsKg