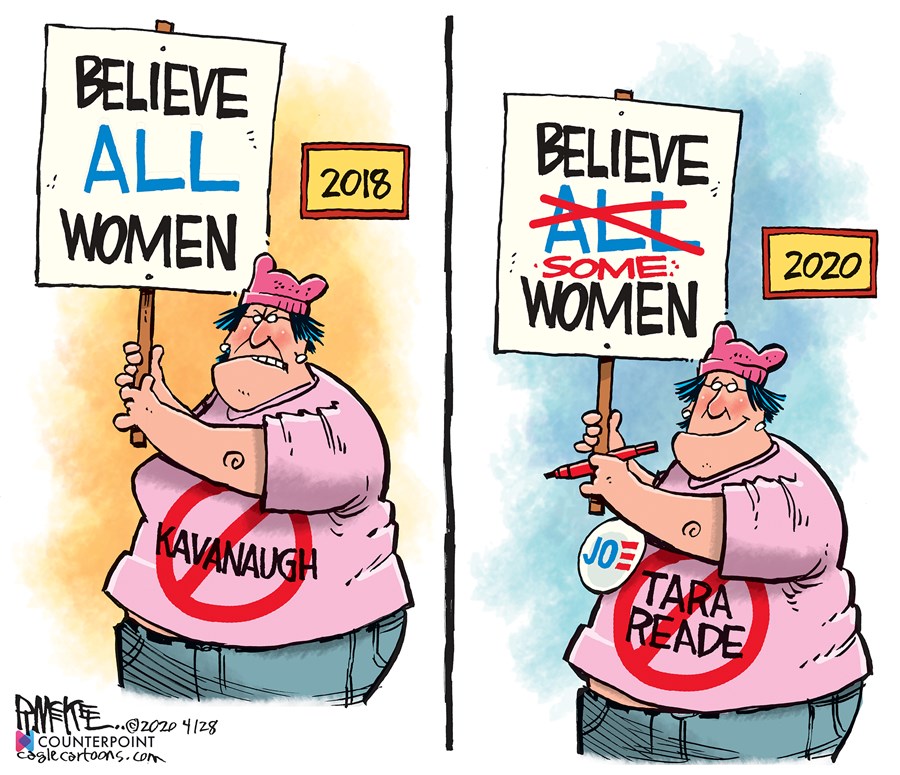 On top of the growing mountain of evidence, nothing points to Joe Biden being guilty of a brutal and violent sexual assault more than his own suspicious behavior.

Tara Reade has credibly accused Biden of sexually assaulting her in 1993.  At the time, she was working in Biden’s U.S. Senate office and alleges he pinned her against a wall and then went under her skirt to stick his fingers in her vagina. She says she filed an official complaint and was fired in retaliation.

All available evidence so far backs Reade’s claim, including five contemporaneous witnesses who say Reade told them about the assault at or near the time she says it occurred. We also have videotape of Reade’s now-deceased mother and her anguished call to a 1993 edition of CNN’s Larry King Live to ask for advice about what to do about her daughter’s problems with a “prominent senator.”

What’s more, we have an alleged victim in Reade who is behaving like a woman with nothing to hide. She has made herself ridiculously available to a media who have either demeaned or ignored her, she is challenging investigative journalists to dig into her story, and she wants Biden to authorize the release of his senate papers, which she hopes will prove she did, indeed, file this harassment complaint.

Now, let’s contrast Reade’s behavior with Joe Biden’s… He is acting like the guiltiest man alive. In fact, I’ve never seen a politician behave in a more guilty manner. Here’s the rundown….

For months, Biden has been facing this terrible allegation, and not once has he said he’s innocent. Not once has he defended his innocence and character. Instead, he hides behind a campaign that releases statements on his behalf but never a statement directly from him.

Contrast that with anyone you have ever known who was falsely accused of something. Compare Biden to Brett Kavanaugh, who was chomping at the bit to go before the Senate and the public to defend himself and his honor.

Biden is in hiding.

Why won’t Joe Biden defend himself? Well, I think there are only a couple of valid reasons, and both point to his guilt.

Primarily, I think Biden’s terrified that if he claims he’s innocent, this will trigger an immediate civil suit. Reade will sue him for smearing her as a liar.

The statute of limitations might be up on the alleged assault, but if Biden slanders or libels her, she will have cause to file a civil suit, which means videotaped depositions and subpoenaed documents.

Kavanaugh was willing to risk all of this.

Biden is cowering in his basement.

Secondly, much of the evidence against him is impossible to explain away.

Why would Reade — a Democrat — tell five people decades ago she was sexually assaulted by Biden?

What was her motive other than to unburden herself?

And how does Biden explain away Reade’s anguished mother calling into CNN in 1993, a call where he is undoubtedly the “prominent senator” in question.

Just this week, the Biden campaign reportedly issued three talking points to its surrogates about the Reade scandal, and all three of those talking points were exposed as lies.

This week, Joe Biden’s campaign reportedly handed Stacey Abrams — who is on Biden’s potential list of vice president picks — that list of talking points that were all lies. Abrams then went on CNN and told the lie about the New York Times clearing Biden.

Talk about déjà vu all over again…

To those of us of a certain age, this is all depressingly reminiscent of Bill Clinton, a sexual predator who told lie on top of lie on top of lie and then manipulated others, including women, to lie on his behalf.

Joe Biden sent Stacey Abrams out to lie for him. How pathetic and suspicious is that?

Innocent men don’t lie, and they surely do not ask others to lie for him.

On top of Reade, seven other women have accused Biden of inappropriate behavior. Creepy stuff like unwanted kisses, hair sniffing…  We have tons of videotape proving Biden has a disgusting sense of entitlement when it comes to inappropriately touching women AND children.

Joe Biden has so far refused to authorize the release of his Senate papers from the University of Delaware.

On the other hand, Reade wants these papers made available to the public because she believes the harassment complaint she filed might be among them.

Reade claims she was fired by Biden’s Senate office in retaliation for the harassment complaint. Investigative reporter Rich McHugh (one of the only good guys in the media who’s actually looking into this) says he found an intern who worked under Reade in Biden’s Senate office, and this intern verifies Reade abruptly disappeared at the time in question.

If Biden is innocent, personnel records would make this the easiest Reade allegation to debunk. But Biden has so far not only refused to release those records, no one has bothered to explain why Reade was fired, and if she was not fired, why she left.

Again, compare Biden to Kavanaugh, who went before the country to profess his innocence and who publicly released his calendar and other documents from 1983, the year in question.

Bottom line: Biden’s videotaped history of inappropriate behavior, combined with multiple accusations, his deafening silence, his campaign’s lies, and his refusal to release documents, amount to the behavior of a guilty man.

The Democrats’ double standards are getting exhausting. pic.twitter.com/g1b9GGFpGe

#BREAKING: HERE is the video from August 11,1993's 'Larry King Live' described by @TheIntercept (and Tara Reade) as allegedly featuring her mother calling in and alluding to Reade's sexual assault claims against @JoeBiden (blog here by @ScottJW) https://t.co/fCgEqBnX7n pic.twitter.com/V5FGHskv56

In Case You Missed It:  Woman Who Escaped From North Korea Describes The Horrors Of Life Under Communism (VIDEO)
Posted in Tyranny and tagged Crime, Democrats, rape, Usurper Joe Biden.

The Seven-Step Path from Pandemic to Totalitarianism

There are just seven steps from pandemic declaration to permanent totalitarianism – and many jurisdictions are about to start Step...