Senator Ted Cruz (R-TX) on Friday flew from Houston to Dallas to get his hair cut at Shelley Luther’s salon after her release from jail.

Texas salon owner Shelley Luther broke the state quarantine in late April to save her business and feed her children. 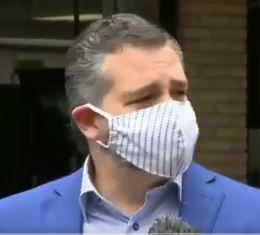 At a rally that day SHE RIPPED IT UP during her speech!

On Tuesday Shelley Luther was sentenced to 7 days in jail and a $7,000 fine.

Shelley refused to apologize to the liberal judge for opening her business.

On Thursday Governor Greg Abbott announced changes to his stay-at-home orders to prevent more mothers from being jailed for opening their businesses in order to feed their children.

Shelley Luther’s Salon a La Mode is open for business and she proudly served Senator Cruz!

This is such an incredible story. Brave business owners are taking matters into their own hands . . . and the courageous among us are supporting them.

Ted Cruz blasted the far left radical judge who sentenced Shelley Luther to 7 days in jail for the ‘crime’ of working to feed her children.

Cruz said he was disgusted by the judge and reminded Americans they should never ever apologize to elected officials.

Sen. @tedcruz traveled to Dallas this morning to get his hair cut by Shelley Luther at Salon a La Mode after her release from jail.

Every American should listen what he had to say.

The Muslim jihadist has only been in Congress for one term and already this woman has been caught in numerous...