Obama and his cronies are having a very bad month, just last week it was exposed Obama himself set up the Russian collusion hoax in an illegal attempt to fix the election outcome and now Mexico is coming after Obama for the illegal activities there.

Mexican President Andres Manuel Lopez Obrador called on the US to apologize if it is confirmed US agents carried out the botched Fast and Furious gun running program during the Obama years.

The Mexican government is asking Washington for cooperation in discovering how Operation Fast and Furious happened.

Obrador demanded the US clarify or apologize for the Obama era gun-running program.

Fast and Furious guns were discovered at El Chapo’s hideout in Mexico.

Fast and Furious guns were linked to over 200 murders.

Fast and Furious guns were used in the Garland Texas terrorist attack.

Fast and Furious guns were even used by ISIS terrorist.

On December 14, 2010, Border Patrol Agent Brian Terry was shot dead by a group of suspected drug cartel along the Mexican border in Peck Canyon, northwest of Nogales, Arizona. The guns used to kill Brian Terry were traced back to Operation Fast and Furious. 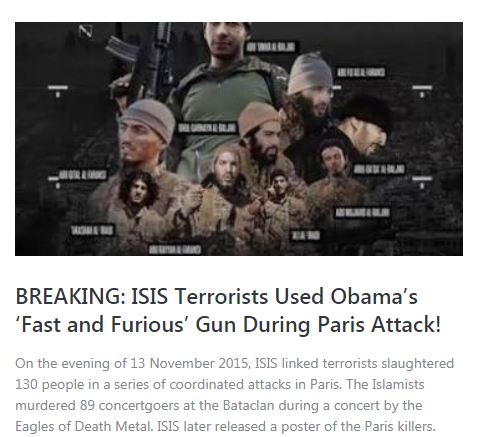 Mexico’s president asked the United States for answers and an apology for the Obama-era gun-running operation known as “Fast and Furious.” On Friday, Mexican President Andres Manuel Lopez Obrador called for an investigation into Operation Fast and Furious to prevent it from happening again.

“What seems serious to me is that a violation of our sovereignty was carried out, a secret operation, and that Mexicans were killed with these weapons,” Lopez Obrador said during a press conference in Mexico City on Friday.

“How could this be? A government that invades in this way, that flagrantly violates sovereignty, international laws,” Lopez Obrador continued. “We have to shine light on this so that an action of this type will never be carried out again.”

“There is still time for the U.S. to apologize,” the Mexican president stated.

The Supreme Court will hear oral arguments Monday in a pair of consolidated cases, Our Lady of Guadalupe School v....