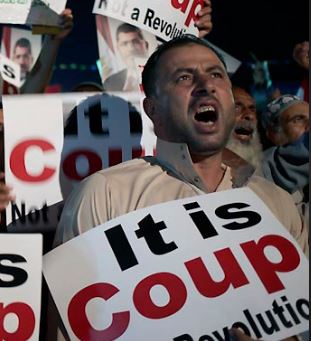 When Trump tweets out an article with the message “Wow, this is BIG!,” it’s wise to pay attention.  In this case, the message referred to a Gateway Pundit article entitled “NOW WE KNOW: John Podesta Admits in Testimony Both the DNC and Hillary Campaign Split the Cost for Bogus Trump-Russia Dossier That Launched the Coup.”

While Obama was famous for saying he first learned about the many scandals in his administration through media reports, Trump is no Obama, which matters for a couple of reasons.  First, this is not a Trump scandal, so Trump’s not creating a smokescreen.  Second, only a credulous person would believe that Trump is not already well versed in the details of Podesta’s testimony.  This means that when Trump sent out the following tweet, he was telling Americans to pay close attention:

Wow, this is BIG! https://t.co/cC9NlHWdfl

So what’s the story, and why does it matter?

The FBI and DOJ obtained FISA warrants to spy on Carter Page.  Under the two-hop rule, this meant they would have had access to everyone in the Trump campaign, including Trump himself.

Inspector General Michael Horowitz’s report regarding the FISA warrants confirmed that the basis for obtaining all of the FISA warrants was the infamous Steele dossier.  Even as the FBI relied on the Steele dossier to spy on Page, FBI officials knew that the information in the dossier not only was unreliable, but probably contained Russian intelligence disinformation.

In other words, the fabricated Steele dossier was the springboard for the attempt to take down the Trump campaign and, when that failed, to knock out Trump’s presidency.  It is a crucial document.

Once James Comey leaked word out about the Steele dossier, it took little time to learn that the law firm of Perkins Coie had paid Fusion GPS for opposition research against Trump.  Fusion GPS, in turn, hired Christopher Steele, a retired British spy who hated Trump, to assemble the information.  Still more research established that both the Clinton campaign and the Democrat National Committee (DNC) used Perkins Coie as their general counsel.

Likewise, on October 26, 2017, CNN reported that John Podesta, who was Hillary’s campaign chairman, and Debbie  Wasserman Schultz, the DNC chair, told congressional investigators that they knew nothing about “an arrangement to pay for opposition research on President Donald Trump.”

The newly released testimony from Podesta’s December 2017 hearing before the House Intelligence investigators tells a different tale.  To begin with, Podesta, who was in charge of Hillary’s campaign, pulls an Obama and claims he’d never even heard of Fusion GPS until he read about it in the papers after the election.  He claims that February 10 (presumably in 2017) was the first and only time he spoke to Glenn Simpson, Fusion GPS’s founder, about “the Russian interventions in the campaign” because Fusion GPS wanted money for more research.

Under oath, Podesta claimed that “I’ve subsequently learned that [Perkins Coie] had contracted with Fusion during the course of the campaign, but I didn’t know that during the campaign.”

However, a short time later, in response to a different question, Podesta admitted that the campaign, along with the DNC, had paid for Fusion GPS’s work:

DR. WENSTRUP: And you testified then you did not know who paid Fusion GPS.

DR. WENSTRUP: And you testified then you did not know who paid Fusion GPS.

(As an aside, the staff member told Podesta to give “complete and fulsome replies to questions.”  That’s a peculiar instruction, given that “fulsome” means disgusting and repulsive, and even insincere.)

After conceding that Hillary’s campaign helped pay for the Steele dossier, Podesta went coy about the fact that he was utterly incurious about either the information or its origin when it popped up on his desk.  For those old enough to remember Hogan’s Heroes, Podesta turned into the quintessential Sergeant Schultz, presenting himself as a glad-hander who knew nothing about campaign operations.

As noted above, Trump probably knows everything that’s coming down the pike about the Obama administration’s attempt to destroy his campaign and presidency, a job that the Hillary campaign and the DNC abetted.  With his tweet — “Wow, this is BIG!” — it’s reasonable to believe that Trump knows that the Clinton campaign and the DNC, having agreed to go 50-50 for opposition research on Trump, didn’t just fund the Steele dossier, but were up to their necks in it.  It’s therefore entirely possible that their ongoing attempt to distance themselves from the dossier — and the coup attempt that it triggered — is about to fall apart.

In Case You Missed It:  CNN Trying To Do Damage Control After Being Called Out As Liars By Joe Rogan (VIDEO)
Posted in Tyranny and tagged Crime, Democrats, Obama, Obamagate, Spygate, Tyranny.

by Andrew Bieszad In the words of the 1970s band Bachman-Turner Overdrive, “You ain’t seen nothin’ yet.” While the above phrase...