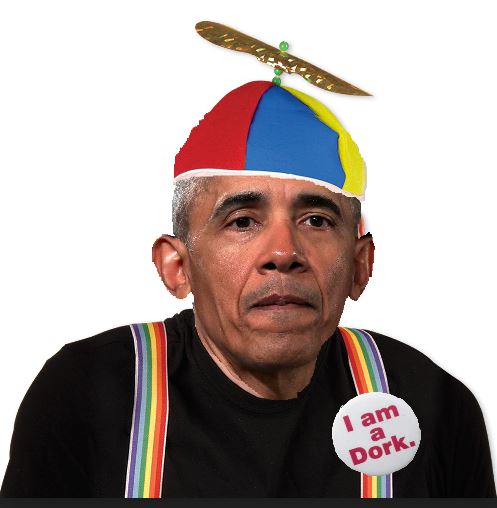 It has always been a lie that Barack Obama was a distinguishded constitutional law scholar, a professor of law at the University of Chicago. In fact, he was a lecturer brought in to teach a class on his theories of race and law, and never published any scholarly work. That is not what a professor does.

But in his telephone call to “Obama alumni” that was immediately leaked to Michael Issikoff, he demonstrated appalling sloppiness and ignorance that reveals what a lightweight legal thinker he is.

The Wall Street Journal editorial board is slamming him this morning:

Barack Obama is a lawyer, so it was stunning to read that he ventured into the Michael Flynn case in a way that misstated the supposed crime and ignored the history of his own Administration in targeting Mr. Flynn. Since the former President chose to offer his legal views when he didn’t need to, we wonder what he’s really worried about.

“There is no precedent that anybody can find for someone who has been charged with perjury just getting off scot-free,” Mr. Obama said in the Friday call to about 3,000 members of the Obama Alumni Association.  (snip)

…this gets the case willfully wrong. Mr. Flynn was never charged with perjury, which is lying under oath in a legal proceeding. Mr. Flynn pleaded guilty to a single count of lying to the FBI in a meeting at the White House on Jan. 24, 2017 that he was led to believe was a friendly chat among colleagues.

The Journal points out that it was President Bill Clinton who got off “scot-free” for lying under oath.

But even more egregiously, as Don Surber and retired FBI Special Agent Mark Wauck point out, Obama himself pardoned a different general fromaperjury conviction, allowing him to get off scot-free. Surber cites this New York Tomes article published on the last day of Obama’s presidency, Jan 17, 2017:

“President Obama on Tuesday pardoned James E. Cartwright, a retired Marine Corps general and former vice chairman of the Joint Chiefs of Staff who pleaded guilty to lying to the F.B.I. about his discussions with reporters about Iran’s nuclear program, saving him from a possible prison sentence.

“General Cartwright, who was a key member of Mr. Obama’s national security team in his first term and earned a reputation as the president’s favorite general, pleaded guilty late last year to misleading investigators looking into the leaking of classified information about cyberattacks against Iran.

“He was due to be sentenced this month. His defense team had asked for a year of probation and 600 hours of community service, but prosecutors had asked the judge overseeing his case to send him to prison for two years.

“Now, the retired general will be spared such punishment.”

So once again, Obama lies.

The media knows this and fails to inform the public.

Surely, Obama remembers as well, unless he is having a Biden moment.

Obama verbally worried about “the rule of law” to his 3000 closest friends on the call. This is utter projection, a nearly universal practice on the left of accusing opponents of the tactics they use. As the Journal editorialized:

We doubt Mr. Obama has even read Thursday’s Justice Department motion to drop the Flynn prosecution. If he does ever read it, he’ll find disconcerting facts that certainly do raise doubts about whether “our basic understanding of rule of law is at risk,” though not for the reasons he claims.

Start with prosecutorial violation of the Brady rule, which Mr. Obama knows is a legal obligation that the prosecution must turn over potentially exculpatory evidence to the defense. Yet prosecutors led by special counsel Robert Mueller didn’t disclose that the interviewing FBI agents at the time didn’t think that Mr. Flynn had lied about a phone call with the Russian ambassador.

Worst of all, as a legal matter, is that they never told Mr. Flynn that there was no investigative evidentiary basis to justify the interview. The FBI had already concluded there was no evidence that Mr. Flynn had colluded with Russia in the 2016 election and had moved to close the case. James Comey’s FBI cronies used the news of Mr. Flynn’s phone call with the Russian ambassador as an excuse to interview the then national security adviser and perhaps trap him into a lie.

In Case You Missed It:  UPDATE: Biden Accused of Planning a Photo-Op with Hero Border Patrol Agents — Then Insulted Them and Took Back the Invitations
Posted in Tyranny and tagged Crime, Democrats, law, Obama, Obamagate, Spygate, Tyranny.

How and Why Muslims Delude Themselves about Islam