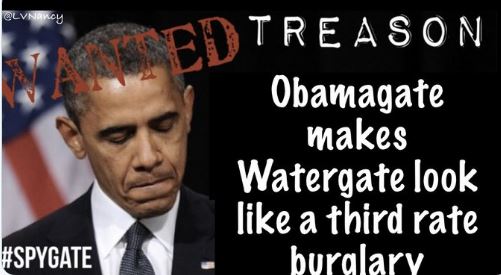 While the media continue to be obsessed with the New York virus, which they believe is the cudgel they need to destroy Trump’s reelection chances, Trump is signaling the end of the three-year drama that was the Russia Hoax, from its first appearance in January 2017, all the way through a frustrated Robert Mueller’s inability to find a smidgen of evidence showing that Trump or anyone else on his team had colluded with Russia to win the election.

All the while, Trump’s supporters, and those who are not Trump’s supporters but who still believe in the rule of law, have been waiting for the other shoe to drop.  The other shoe is to expose those who tried to steal an election and then wage a coup against a duly elected president.  It would be even better to have those people arrested (preferably at 3 A.M., by a huge FBI team, with cameras rolling), tried, and imprisoned, but that may be a hope too great.

On Saturday, it appears that Trump dropped that other shoe, for that’s when he retweeted Jesse Watters’s comprehensive breakdown of the Obama team’s wrongdoing, in reliance upon a slew of newly released documents from the House Intelligence Committee:

On Sunday, Trump went on a Twitter binge revolving around one very important word: OBAMAGATE.  Indeed, he sent out a post containing only that neologism

Trump then retweeted others who used that neologism.

"The White House is running this" #PeterStrzok

Suddenly Barry's conversation is "Leaked" about injustice?
You bastards framed a 3-Star General #GenFlynn and tried to DESTROY our country. pic.twitter.com/GdtZoNCa67

Trump tweeted out a significant phrase in connection with Obamagate: “He [Obama] got caught.”  For Trump to make that assertive a statement almost certainly means that this week will reveal evidence showing Obama’s fingerprints all over the Deep State’s conspiracy:

He got caught, OBAMAGATE! https://t.co/oV6fum0zIS

In several more tweets, Trump doubled down on the idea that a president was involved in a serious crime:

In one of his many Obamagate tweets, Trump had an answer to the question in Mollie Hemingway’s article entitled “Why Did Obama Tell the FBI to Hide Its Activities from Trump?”

Because it was OBAMAGATE, and he and Sleepy Joe led the charge. The most corrupt administration in U.S. history! https://t.co/PTzFvvITh3

I hope you caught the way Trump implicated Biden there.

Trump next tweeted out Sean Hannity’s and Tucker Carlson’s #Obamagate episodes, both of which are replete with damning videos:

Thanks to Trump’s focus on the word “Obamagate,” at one point on Monday, the hashtag #Obamagate was trending with 2.4 million retweets:

Maybe I'm not good at math, but why does #TrumpGate outrank #ObamaGate here? pic.twitter.com/tCt0RlDRKw

Also on Monday, news broke that Richard Grenell, the interim director of National Intelligence and one of the most pivotal people in the search for truth, was able to have declassified a list of Obama officials who were part of illegally unmasking General Flynn.  Between this news and Trump’s “Obamagate” tweets, if you don’t have popcorn, you might want to buy some.  The upcoming political show is about to get exciting.

By T.R. Clancy The long overdue cracking of the conspiracy to frame President Trump's national security adviser has the left wailing.  It...