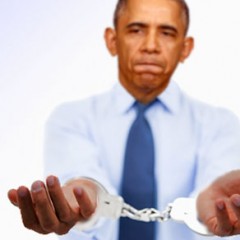 As more evidence emerges of the criminal role played by former President Barack Hussein Obama in directing Russia-gate, President Donald J. Trump’s “allies” are leaving the field of battle. They seem not to want to hold Barack Hussein Obama responsible for what President Trump calls the “biggest political crime in American history, by far!”

First, Senator Lindsey Graham said he wouldn’t subpoena Obama to testify before his Judiciary Committee about Russia-gate. Then, the top Republican on the House Intelligence Committee, Rep. Devin Nunes (R-CA,) stated that House Republicans have not made any criminal referrals for Obama or 2020 Democratic presidential candidate and Obama former Vice President Joe Biden relating to Russia-gate. Finally, Attorney General William Barr said he did not expect criminal probes of either Obama or Biden in the matter.

This is all we need to know about whether top Republicans in the House and Senate, and an Attorney General nominated by Republican President Trump, are serious about getting to the bottom of Russia-gate.

This is so despite the fact that progressive historian Eric Zuesse has written that Obama is in “severe legal jeopardy” because of his role in sabotaging the Trump Administration. He explains, “The biggest crime that a U.S. President can commit is to try to defeat American democracy (the Constitutional functioning of the U.S. Government) itself, either by working with foreign powers to take it over, or else by working internally within America to sabotage democracy for his or her own personal reasons.” In either case, he wrote, it’s treason.

“What we are watching is turning out to be traces of a plot against a government elected by the American people,” said Michael Hudson and Paul Craig Roberts about the role of various Obama officials in sabotaging the Trump Administration. They added, in a story that was published back in 2017, that, “Law requires Trump to arrest those responsible and to put them on trial for treason and conspiracy to overthrow the government of the United States.”

Here we are three years later and Graham, Nunes, and now Barr have not done anything to hold Obama personally responsible. They have failed to provide Trump with the legal basis on which to accuse Obama and others with treasonous conduct.

Left-wingers not beholden to the Democratic Party are willing to admit the obvious. Author Branko Marcetic called the targeting of Trump National Security Adviser Michael T. Flynn “a case of entrapment” and said the FBI “even used outright false claims to obtain a FISA warrant to spy on former Trump campaign aide Carter Page…” He concluded that the FBI and various US government agencies engaged in “prosecutorial overreach, entrapment, and the criminalization of foreign policy dissent” in the case of Russia-gate.

Trying to appeal to traditional liberals, he notes, “…the fact that the FBI’s misconduct was aimed at a right-wing government this time should be no reason for Democrats to dismiss the magnitude of the scandal.”

The magnitude of the scandal is what makes it treason. This was a direct assault on the American system of government that we now understand was based on a phony dossier, compiled by a former British spy, based on Russian disinformation.

Nunes wrote a book back in 2010, Restoring the Republic, but he has not followed through in the matter of holding Obama accountable. Graham frequently appears on the Fox News Sean Hannity show, posturing as a conservative, but he won’t call Obama to testify at his upcoming Russia-gate hearings. After Barr said he didn’t anticipate criminal charges against Obama or Biden, the conservative legal analyst, Andrew C. McCarthy, agreed that what Obama and Biden did “simply may not be criminal,” even though the Democrats’ may have  used counterintelligence powers “for partisan political purposes.”

Why the eagerness to let Obama off the hook?

Why the eagerness to let Obama off the hook? These inside-the-beltway politicians and commentators are afraid to use the word “treason.” They are failing the American people and their president.

In truth, Obama’s motives were two-fold. One, he wanted to disrupt the Trump Administration, making it impossible for Trump to govern and deal with real national security problems. Obama knew this would enable our enemies to gain an advantage over us. Second, he was afraid that the Trump Administration would use the resources of the government to investigate Obama’s own mysterious background and identity. As we argued in one of our Obama books, Comrade Obama Unmasked: Marxist Mole in the White House, “The smoking gun evidence of Barack Hussein Obama’s deep personal relationship with suspected Soviet espionage agent and Communist Party member Frank Marshall Davis is the real Russia-gate scandal.”

At one of his press briefings, Trump was asked by the Washington Post’s Philip Rucker “What crime, exactly, are you accusing President Obama of committing and do you believe the Justice Department should prosecute him?”

“You know what the crime is,” Trump replied. “The crime is very obvious to everybody.” He added, “All you have to do is read the newspapers—except yours.”

The answer to the question is treason. It’s obvious

The answer to the question is treason. It’s obvious.

But in this day and age, treason is not talked about.

To cite another example, consider the actions of the Federal Reserve in hiring the notorious firm BlackRock to help purchase billions of dollars in bonds and securities. At a Tuesday hearing, Senator Martha McSally asked chairman Jerome Powell why a firm like BlackRock, which invests in Chinese companies, had been hired for this purpose. He replied, in part: “All large asset managers buy Chinese securities. These are global asset managers—I’m not here to defend or criticize them for that, it’s just not really relevant to the work that we want them to do.”

It’s “not relevant” when a firm does business with a country and regime that unleashed this virus on the world? Why didn’t the Fed require Blackrock to divest from China? That’s precisely what the National Legal and Policy Center has asked the firm to do.

One of McSally’s concerns was whether the profits made by BlackRock would be used to buy more Chinese companies.

“Communist China should not be profiting off of unleashing this calamity on the world and that is something that should unite all Americans, even if they work at BlackRock,” she said.

Neil Cavuto, is attacking President Trump for using a drug he promoted, hydroxychloroquine

She noted that BlackRock’s website has a page titled “Five Myths and realities about investing in China,” and explained, “According to BlackRock, one of the biggest myths about China is that Chinese state-owned enterprises don’t control their economy, and BlackRock even tries to back that up with data—I won’t go into all of it, but it’s ridiculous.”

Speaking of the Chinese, in November of 2017, as Russia-gate was underway, Obama made a trip to Beijing, to have what was described as a “hush-hush” meeting with Chinese dictator Xi Jinping. They were described as “veteran cadres,” a term generally applied to retired Chinese Communist Party officials.

In the midst of all of this, a Fox News anchor, Neil Cavuto, is attacking President Trump for using a drug he promoted, hydroxychloroquine, in order to prevent coronavirus. His physician said the drug has potential and the risks are relatively low.

Rather than attack the president, he should be commended for practicing what he preaches. But in this upside-down world, in which Obama is accused of treason, and the Federal Reserve uses a China-friendly company to conduct business, Trump is once again made into a villain – and on a so-called “conservative” news channel.

By Jonathan F. Keiler There are two aspects to the current imbroglio over the Justice Department’s attempt to dismiss the Michael...