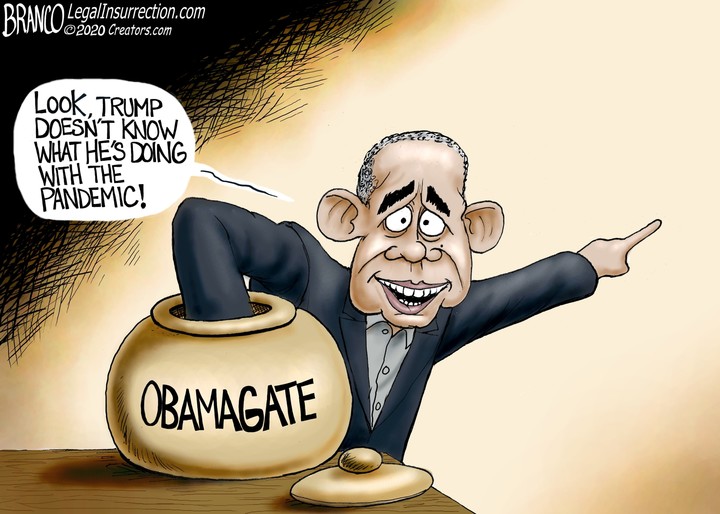 Well informed citizens have been rocked by revelations from recently unclassified documents that clearly show that President Obama “was aware of the details of wiretapped conversations of then-incoming National Security Advisor Michael Flynn and then-Russian Ambassador Sergey Kislyak in December 2016.”  Further, there’s a long list of Democrat dignitaries who are also part of the unprecedented spying on an opposition party in an attempt to influence a presidential election and then undermine the duly elected president.  The really pivotal fact, however, is that “Obama’s knowledge of Flynn being wiretapped raises significant questions about what Obama knew and when he knew it with regard to the attempt to railroad Flynn and prevent him from serving as Trump’s national security advisor.”

There is nothing new about Obama seeking private information in order to smear a political opponent.  It was well known that when he ran for the Senate in 2004, a California judge ruled that the divorce papers of his opponent, Republican Jack Ryan, be released.  Both Ryan and his wife argued that the disclosure of the closed records would be harmful to their son, and they both opposed public disclosure of the documents.  With the release of those documents, Ryan withdrew from the U.S. Senate election, and Obama sailed into the Senate without an opponent.  That scheme was not a new tactic for candidate Obama.  His opponent in the primary, Blair Hull, was also a divorced man with sealed records from 1998.  In the infamous Chicago, Illinois politics in 2004, an enterprising reporter “discovered” that Hull’s wife had previously sought a protective order against her husband.  Obama “cruised to victory” in the primary — with the impossible odds of the same circumstances enabling him to win the general election against Ryan.  One analyst described Obama as “lucky with his enemies” — a man with a fortunate history of “hapless opponents.”

According to multiple media reports, including in the Western Journal, those campaign practices continued at the presidential level.  “The Barack Obama presidential campaign hired Fusion GPS in 2012 to dig up dirt on Republican candidate Mitt Romney,” according to a 2018 book by Michael Isikoff and David Corn, Russian Roulette: The Inside Story of Putin’s War on America and Donald Trump’s Election.

Further, we now have documents indicating exactly how various Obama administration leaders who were supposed to be serving the American people were actually weaponizing for political purposes their agencies to spy on the incoming Trump personnel.  Just days ago, Gina Loudon recounted details on RealClear Politics about how acting director of National Intelligence Richard Grenell has been cleaning up the Office of National Intelligence to strengthen and protect its transparency and accountability.  “Thanks to Grenell’s efforts, Americans now know that the Obama administration abused its power during the 2016 campaign in order to illegally spy on Donald Trump’s associates.”  The sheer volume of requests during the Obama administration is indicative of how widespread the spying was.  For instance, United Nations ambassador Samantha Power was the “largest unmasker of US persons in our history.”  She unmasked more than 300 U.S. citizens in less than a year!

Grenell has released the names of sixteen Obama officials who specifically targeted Michael Flynn by requesting that his name be “unmasked” on documents recounting his conversations with Kislyak.  In fact, during a two-month period after the 2016 election, Lee Smith, of the New York Post, reported that there were 49 requests to unmask General Flynn — a clear indication that Flynn was chosen because he was “one of Trump’s ‘most trusted advisers,'” thus his conversations could reveal Trump’s plans.

From the very beginning of the Trump presidency, there were conflicting rumors and leaks about documents purported to show Trump colluding with the Russians.  Others claimed that Trump was under investigation by the FBI.  At the time, Glenn Reynolds, of Instapundit fame, wondered if we would ever know the truth and answered his own question: “Maybe, if there’s a proper investigation into Obama Administration political spying.”  At the time, Reynolds ventured an hypothesis: the “spying on Trump thing is worse than we even imagine.”  Further, he declared that after Hillary lost the 2016 election and those involved realized that proof of the spying would “inevitably” come out, they invented “the Trump/Russia collusion talking point … as a distraction.”  In fact, Reynolds noted that back on March 6, 2017, Democratic senator Chris Coons apologized with a rather contrived story.  He claimed that his earlier comments about there being “transcripts” of President Trump colluding with Russian officials had been “misinterpreted.”  Sadly, he worried, those misinterpretations had produced some Senate “hyperventilating.”  Senator Coons declared that he had “no hard evidence of collusion.”

Let all that sink in: there was enough talk about political spying and “transcripts” that a leading Democrat was compelled to declare that there was nothing there to see!  In fact, the media laughed at President Trump’s assertions that his campaign was being spied upon.

Then-chair of the House Intelligence Committee Devin Nunes, likewise, was subjected to ridicule back in 2017 when he declared that “none of this surveillance was related to Russia, or the investigation of Russian activities.”  Similarly, Attorney General William Barr has been derided for his revelations.  The problem for the Democrats is that both Nunes and Barr have reputations for excellence and for being completely trustworthy.  What Victor Davis Hanson wrote about Barr applies equally to Nunes: they “will follow the law wherever it leads … without worry over the consequences.”  Hanson described that reality as being “quite scary indeed” for some politicos.

Among the scary realities finally coming into the light is evidence that Russia actually preferred Hillary Clinton over Donald Trump to win the election of 2016.  Regardless of that reality, the narrative pushed by the Democrats and the media was that the Russians’ pro-Trump efforts ensured Trump’s victory.  Last month, we learned that the U.S. Intelligence Community knew that the Russians preferred Hillary, but then–CIA director John Brennan suppressed that information “over the objections of CIA analysts.”  So, all this time, according to Fred Fleitz, a former CIA analyst, the U.S. Intelligence Community was fully aware that the Russians preferred Hillary — explaining that “it was not in Russia’s interests to support Trump[.] … Putin stood to benefit from Hillary Clinton’s election.”

The scary reality is that the U.S. has been deliberately duped into a long national nightmare of division.  The president and his family have been subjected to unprecedented personal attacks.  The president’s supporters have been disparaged and called “hypocrites” and worse.  All the while, high-ranking officials in the Obama administration have been perpetuating false narratives to cover up their illegal spying, inventing talking points about “Russian collusion,” and conducting an impeachment process based on lies in order to overturn the results of a legitimate election of a candidate they hate.

Will Smith summed up what happens when a person hates another: “Hate in your heart will consume you, too.”  The recently revealed unmaskings point to illegal actions that threaten to consume innumerable high-ranking dignitaries in the former Obama administration.

Black politicians, civil rights leaders, and their white liberal advocates have little or no interest in doing anything effective to...