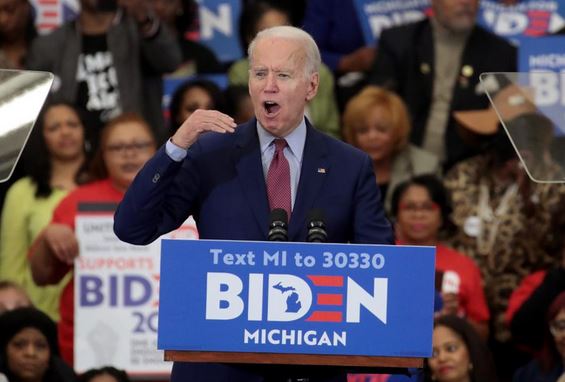 Half a year after the failed attempt to impeach President Trump over his “pressure” on Ukraine, a topic of the relationship between the U.S. and Ukraine will be yet again getting close attention and presumably making it hot and sweaty in the Delaware basement.

A reason for that is a political scandal that burst out in Kiev on May 19, when a member of Ukrainian Parliament Andrey Derkach called a press conference where he released audio records of the phone calls between “individuals whose voices sound like” those of ex-President of Ukraine Petro Poroshenko and Vice President Joseph Biden, as well as Secretary of State John Kerry who discussed the course of Ukrainian domestic policy in very precise detail. On that tapes, Joe Biden factually tells Poroshenko what to do, and Poroshenko seeking advice, cooperates his actions and frankly reassures Biden that all his orders will be executed. Mr. Derkach said that the contents of those records are sufficient to incriminate Poroshenko a treason. As for our side of the pond, the tables are rapidly turning against Biden, who, so far, “magically” shrugged off all corruption accusations.

Yours truly, as a native Russian and Ukrainian speaker, was thrilled to listen to every single word that was said on that press conference.

The central topic of the conversations on the highest level was a figure of Ukrainian Prosecutor General Viktor Shokin, whom American counterparts insisted to be removed from the Office as a key precondition of landing Ukraine $1 billion that it strove to receive from IMF to keep its collapsing economy afloat.

The first conversation between Poroshenko and Kerry took place on December 3, 2015. During that initial call, Kerry told Poroshenko that “Vice President Biden would like you to consider a possibility to replace General Prosecutor Viktor Shokin … Vice President is concerned about it.” Kerry urged Poroshenko to resolve this “issue” by the Biden’s visit to Ukraine.

On February 18, 2016 Poroshenko gave Biden “good news”: “Yesterday I met with General Prosecutor Shokin, and despite of the fact that we didn’t have any corruption charges, we don’t have any information about him doing something wrong, I specially asked him … to resign… And despite of the fact that he has a support in the Parliament. And as a finish of my meeting with him, he promised to give me the statement on resignation. And one hour ago he bring me the written statement of his resignation. And this is my second step for keeping my promises.” “Great!” – exclaims Biden. Thus, there was nothing wrong with Shokin, according to Poroshenko, but one billion dollars outweighed it for the corrupt Ukrainian President.

Interestingly, that is not even the news since Biden himself bragged about his influence on Ukraine at the Foreign Affair Issue Launch on January 23, 2018: “I was supposed to announce that there was another billion-dollar loan guarantee. And I had gotten a commitment from Poroshenko and from Yatsenyuk [Prime Minister of Ukraine] that they would take action against the state prosecutor. And they didn’t…I said, you’re not getting the billion. I’m going to be leaving here in, I think it was about six hours. I looked at them and said: I’m leaving in six hours. If the prosecutor is not fired, you’re not getting the money. Well, son of a bitch. He got fired.”

Yes, Viktor Shokin was fired, but Biden made more demands from Poroshenko on March 22, 2016: “Tell me that there is a new government and a new Prosecutor General. I am prepared to do a public signing of the commitment for the billion dollars.” “Extremely strong motivation!” – replied Poroshenko eagerly.

On May 13, 2016, Biden congratulated Poroshenko on “getting the new Prosecutor General,” saying that it will be “critical for him to work quickly to repair the damage Shokin did,” than added  “And I’m a man of my word, and now that the new Prosecutor General is in place, we’re ready to move forward to signing that one billion dollar loan guarantee.” Poroshenko remarked that he asked a newly appointed Prosecutor General Yuriy Lutsenko to contact U.S. Embassy, and emphasized that he “would be very pleased if he [Lutsenko] had a certain person either from Washington, whatever… We have here, I don’t remember his name, an American prosecutor of the Ukrainian origin. He’s a little old. I sent Geoffrey [Pyatt, U.S. Ambassador to Ukraine] his name. He was ready to be an assistant and advisor [to Lutsenko]… and be a person of trust.” In other words, an American with the advisory functions to the Ukrainian Prosecutor General who would make sure nobody looks into Burisma anymore. And such person was found – it was ex-U.S. federal prosecutor Bohdan Vitvitsky. Joe Biden, meantime, got what he wanted. The major part of the Burisma investigation was closed, and the remaining part was sent to the National Anti-Corruption Bureau of Ukraine that was directly tied to the U.S. Embassy in Kiev and instead of investigating corruption leaked to them confidential information on Viktor Shokin and his family.

In the course of the press conference, Mr. Derkach described Biden’s motive in firing Shokin. He noted that Prosecutor General’s office had started investigating Burisma Holding in fall of 2015. It was known that Joe Biden’s son, Hunter Biden, joined its board in April 2014, at a time when Burisma was engulfed in corruption investigation woes, and at a time when his father was leading the Obama administration’s effort to curb Ukraine’s endemic corruption. In fall of 2015, Ukraine got evidence on large financial tranches that were laundered by the Burisma and then wired to a company called Rosemont Seneca Bohai LLC between April 2014 and November 2015. Specifically, the records show 18 months in which two payments of $83,333 per month were paid to Rosemont Seneca Bohai for “consulting services,” and then sent to the American Bank Morgan Stanley. “Letting Shokin dig it all up would mean a political suicide for Biden,” – concluded Mr. Derkach.

The second part of the press conference was dedicated to the “external governance” of Ukraine by the U.S., in which Mr. Derkach presented the records of Biden advising Poroshenko how to deal with the parliamentary crisis in Ukraine that would hinder all necessary reforms. Among the methods that Biden explicitly instructs Poroshenko to use are personal appointments and removals, and where and how to find legal loopholes.

The final part of the press conference was led by the Ukrainian ex-prosecutor Konstantin Kulik, who investigated the crimes of the Yanukovych regime in 2016-2019. He detailed corruption actions of the former U.S. Ambassador to Ukraine Marie Yovanovich, the U.S. charge d’Affaires in Ukraine George Kent and FBI Special Representative for Eastern Europe Keren Greenway who blocked the return of funds stolen by the Yanukovych regime to Ukraine in the amount of the country’s annual budget (about $45 billion). According to Mr. Kulik, they “placed fulfillment of orders of representatives of the U.S. Democratic Party over the interests of justice.” “In 2018, it became clear that Biden, Jovanovic, Kent and Greenway are doing everything to block the investigation of Zlochevsky [the Burisma founder] and other persons of the Yanukovych regime and are doing this in coordination with the environment of Poroshenko. Without an investigation of their activities, there is no chance to continue confiscating assets for 40 billion dollars,” he stressed.

All of the records of the hours-long conversations between the top U.S. and Ukrainian officials are now being officially sent to the U.S. government, according to Mr. Derkach. If even a part of the “Derakch tapes” turns out to be true, the Democratic ambitions would be buried for good for at least a couple of the upcoming political cycles.

In Case You Missed It:  Bidenomics: US To Totally Collapse after Dollar Collapses
Posted in Tyranny and tagged Crime, curruption, Tyranny, Ukraine, Usurper Joe Biden.

By Joe Hoft Former US Attorney Joe diGenova was on the Howie Carr radio show again this week and as always, he...