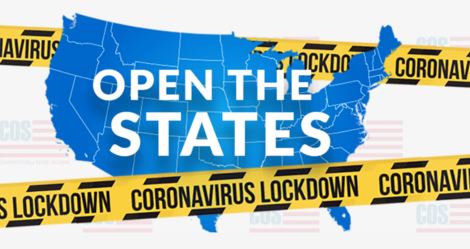 An organization called Open the States is planning nationwide protests on Friday. The mission, posted on the their home page is this:

The citizen-led movement against overreaching COVID-19 lockdowns has been met with derision in the media, scorn from governors, and censorship from big tech. OpentheStates.com was founded to address this dismissive response by giving the American grassroots a place to organize their communities and connect with existing re-open groups.

At OpentheStates.com, concerned citizens can sign the petition urging our national, state, and local leaders to re-open the states and connect with like-minded patriots. We encourage all Americans to follow the CDC guidelines on social distancing, but we do not support government dictates that limit the constitutional rights that have made this country great.

The website has a state-by-state breakdown of vital information. (Scroll down the home page for map.)

Friday’s action appears to be in coordination the Convention of the States. Late last month, Politico reported on groups organizing and supporting protests, though tomorrow’s protests seem to be the largest and most coordinated yet.

The Convention of States, an activist network with tea party origins, did not originate the coronavirus lockdown protests across the country. But it’s got a plan to take them to the next level.

Publicly, the group claims no affiliation with the organizers agitating for state governments to lift social-distancing measures. Yet behind the scenes and on their social media channels, the group’s leaders have made no secret of their desire to boost the protests, if not elevate them to a bigger, more professionalized and media-friendly network with a more broadly appealing message.

Over the past several weeks, the group has scooped up dozens of URLs for sites aimed at organizing future protests in key states — OpenWINow.com, opencalifornianow.com, openfloridanow.com, openarizonanow.com. On private forums, activists affiliated with the Convention of States are coordinating their own protests. And in Facebook livestreams, the organization’s leader has been advising protesters to avoid divisive features that marked some early lockdown protests: stand apart from each other, bring hand sanitizer, and, most importantly, do not openly carry guns, even if you’re protesting in an open-carry state.

“You want to create a narrative that says, ‘Those people look like they’re using common sense. I want to be one of them,’” said Mark Meckler, president of the Convention of States, in a Tuesday livestream.

Predictably, the left is claiming this is an “astroturf” operation as they try to discredit Americans across the country who are suffering economically and sickened by the tyrannical rule that has taken holds in blue states.

It remains to be seen how large the turn-out will be tomorrow. I haven’t seen any information about this circulating on conservative sites until I saw it at Legal Insurrection this week. But I’m writing about it now, albeit in the 11th hour, for anyone who’s interested.

By Veronika Kyrylenko Half a year after the failed attempt to impeach President Trump over his “pressure” on Ukraine, a topic...