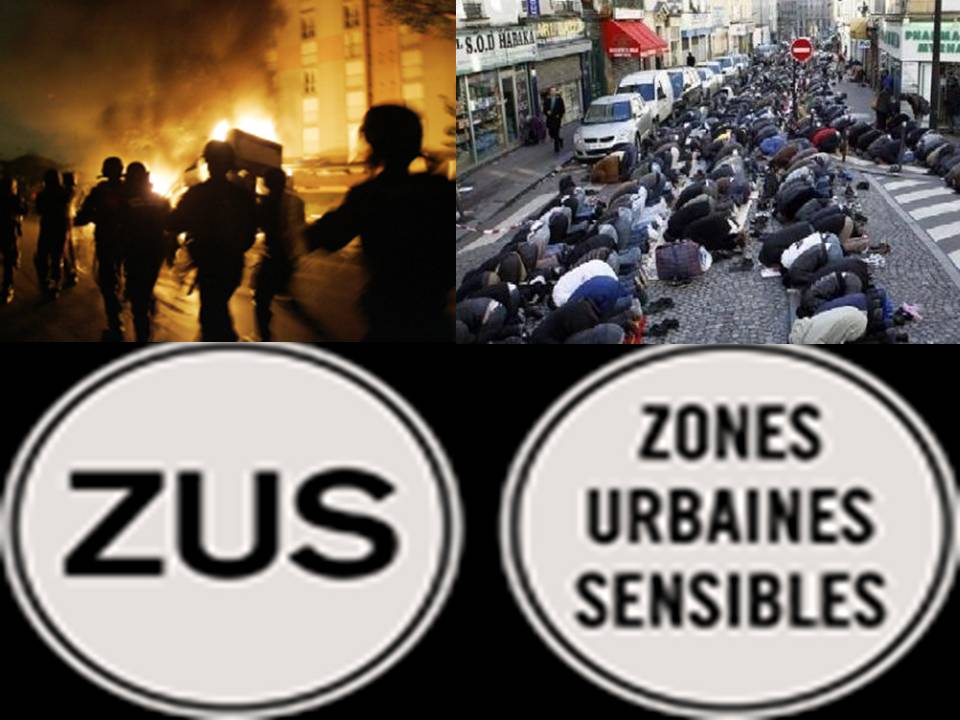 The riot, or as some put it ” the rebellion,” that followed George Floyd’s death in Minneapolis has raised an important question: Is it possible for a police force dedicated to public order to carry out their duties when working with communities who see them as an invading army and respond with appropriate hostility?

The no-go zones of Europe are areas in which the police do not set foot unless compelled by extraordinary circumstances, usually in the case of fire, when they escort firefighters.  Unlike the nascent areas like CHAZ in the U.S., these areas are defined by the central government. They are settled predominantly by immigrants or children of immigrants. For all practical purposes, order has been turned over, both officially by the government, to the local imams and neighborhood gangs. Most of the people are unemployed, deriving their income from government support or the drug trade. The rates of murder and other crimes are high. They have almost no identification with the national culture, little interest in education or in finding qualifications for employment. The mere presence of police is defined as a racist provocation and days of rioting, looting, and arson can follow an unwanted police incursion.The police respond in kind by acting, of necessity, as if they were an invading army. The conditions in places like Molenbeek in Brussels or St-Denis in Paris have been well depicted in television series like The Spiral  or films like La Haine. There are 751 no-go zones in France alone.

The residents of these areas profit from their hatred of the police, the fire-fighters, and the whole French culture. They are given government-supported housing and living allowances, as well as special programs to aid what few wish for: employment.  The students who remain in school are given special admission preference to prestigious schools like the Ecole Normale Supérieure and Sciences Po. During the recent Wuhan virus lockdown, ordinary French citizens were subjected to arrest and draconian fines while the citizens of the no-go zones were let free to do what they wanted without hindrance. On important holidays, car arsons are a common feature of the celebrations and rarely result in arrests or punishment. For decades now, journalists have described the burning of cars and property as playful.

In the United States the interiors of large cities where people are now rioting are dangerous places. The murder rate is high especially among blacks.  The police, white or black, do not feel that they share a common culture with the residents and are made to feel like an occupying army. It is true that some members of the police are there because they wish to dominate, control and hurt the people they serve, but these are few. Most police come from families that value order, religion, and the ritual expression of obedience to shared values, and they are appalled by the conditions of inner-city disorder.

Police assigned to the dangerous areas of inner cities are very much like the soldiers I treated when they returned from active duty in Iraq. Many of these soldiers had PTSD, both from the dangers they had to endure, and from the loss of friends in their units. They had trained themselves to respond rapidly and decisively based on small signs. They had to act under a high state of excitement which made “nuanced” response difficult. Although the two situations are different in that the Iraqis were trying to kill the American soldiers, and the people in inner-city urban areas rarely try to kill the police (that is, before the Black Live Matter era), both soldier and police in the inner cities have to operate in a dangerous environment.

However the psychiatric effects of policing a population that does not wish to be policed and those of soldiers in active combat are the same. High rates of PTSD, depression, alcohol, drug abuse, and suicide are common to both.  It is bound to get worse among the police as they are now defined as the racist enemy of black men.

The relationship between residents and police in urban centers can be contrasted to police and personal relationships in the integrated neighborhood in which I live. My neighbors are about 60% black, 30% white and the remainder descendants of Spanish speakers. All homes have well-kept tree-shaded lawns with carefully tended flower-beds. The residents pick up any trash that might escape the collectors, bins are stowed out of sight the evening after collection. Cars are usually parked in their garages or driveways and not on the street. The neighborhood blog contains no complaint about the police. The police, black and white, share the cultural values of the residents. They work well together.

During the recent reign of the Wuhan virus the neighborhood self-walkers and dog walkers did not wear masks but when we met another coming from opposite directions, one would take the street and the other the sidewalk. We smiled (an important social gesture that is unavailable when someone wears a mask), greeted each other, and sometimes stayed and talked at a respectful distance. We solved the problem of the virus as respectful citizens should: by civil convention. Obviously, there was no rioting or destruction on our streets or nearby shopping center.

This is not to praise our neighborhood but to say that policing may not be possible when the police are perceived as a racist occupying army as The Nation headline suggests “There is only one possible conclusion: White America likes its killer cops.”  If we believe that all our police, white and black, are infected with the gangrene of institutional racism, then the only solution might be a variant of no-go zones for our inner cities, where police, at least white police, can or should never go.

The cultural values of the police favor order, reasonable obedience to the law, and maintenance of property and public space. These are not the values of many in the inner cities, and in fact are actively discouraged by the leaders of the protest. Instead these middle-class values are now perceived as “racist” or “evidence of white domination”. If this state of affairs remains, we can only solve the problem of institutional racism by recognizing the elephant in the room and admitting that communities should have only those police who share their values.

Perhaps these no-go zones which would result from efforts to defund the police should simply banish white policemen and have only black police, but the numbers of black police that have been attacked suggest that this is not so. These communities might believe that the black police have been infected with the institutional racism of their white comrades. The plight of these police who suffer from the inherent racism of middle-class values need to be relocated to the suburbs and rural small towns. The federal government should aid with the relocation of the ousted police and supplement the lower wages that are paid by small towns and cities across the nation.

The mayors and city council people of these cities that wish to exist as a police free zone should be able to reconfigure the tax resources which formerly went to the police in any way they want to.  Perhaps Black Lives Matter, the Southern Poverty Law Center or the faculties or Harvard, Yale and very woke colleges such as Williams can aid them in establishing criteria for recruitment of acting police and the rules for engagement to be used by those police. Do they protect property or people? The  New York Times does not think destruction of property is violence, nor does the Nation which writes

Refusing to incorporate acts of destruction into the political imaginary of protest deprives these acts of their political power. It deprives the movement of a source of material strength. And, perhaps most importantly, it ignores what many protesters are saying with both bricks and words: that the wealth contained in these looted stores is “slavery money…. So when we take it back or we burn it down, yeah. We’re getting back what’s ours.”

Author’s note: That justification of property destruction is highly reminiscent of Kristallnacht or the Night of Broken Glass, a pogrom against Jews carried out by SA paramilitary forces and civilians throughout Nazi Germany on November 9-10, 1938. The German authorities looked on without intervening. I was a few months shy of 6 years old at the time. I wonder if I have seen in these past several weeks a repeat of Kristallnacht with a different target.

Businesses wishing to remain in the no-go zones or the no-go city would have to be given subventions to pay the higher rates of property insurance that would be demanded. They would also have to guarantee protection of firefighters if the city’s firefighters were to be used. However, the residents of these areas might like to provide their own certified non-racist firefighters.

People who live in these now to be city-wide no-go zones and who share the same middle-class aspirations as my black, white and Latino neighbors, would be left in an urban hell, victim to criminals and the “police” their neighbors have chosen. The recent spike in gun violence and murder in Chicago and Philadelphia illustrates the real dangers of interfering with the police.  But these good people apparently, are only a small sacrifice to gain a community-approved police force which could also control the voting apparatus and expression of political belief.

In Case You Missed It:  REPORT: Over 4,000 Illegal Immigrants Crossed The Southern Border Over Memorial Day Weekend
Posted in Freedoms and tagged France, No Go Zones, Riots, United Socialist States of America.

ALLUM BOKHARI #IStandWithTuckerCarlson” trended on Twitter today as conservatives rallied to Carlson’s defense after a coordinated attack on the Fox...