Finally, the mob has realized the need to be inclusive: now they’ve torn down a statue of one of America’s great Hispanics. 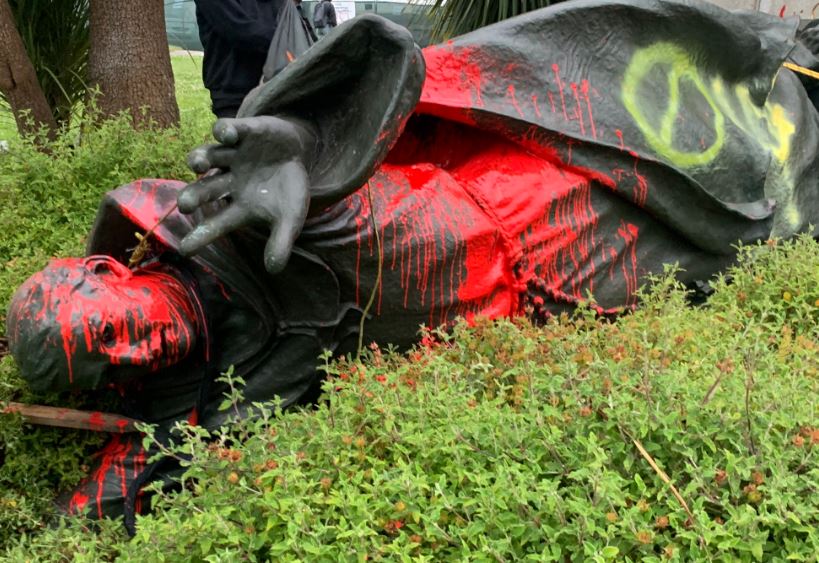 In San Francisco (no one let the mob know the city itself is named after another Catholic saint!) Friday night, a group of activists tore down a statue of St. Junipero Serra, a Spanish Catholic missionary in the late 1700s.

Their spree of topping statues wasn’t limited to Serra: statues of Ulysses S. Grant (the general who Abraham Lincoln relied on to win the Civil War) and Francis Scott Key (author of the Star-Spangled Banner) were also taken down.

And, of course, no arrests have been made.

I have no problem with having a debate about statues, and other ways we honor our history, from road names to school names. (Key and Grant had both owned slaves.) But there is a thoughtful, democratic way to have this debate: a way that allows the span of viewpoints to be heard and respected and that honors our legal system.

And there are more options than simply keeping up or destroying statues. Other choices including adding historical context through plaques, or moving statues to museums.

But that slower method won’t satisfy the tyranny of certain social justice warriors, who prefer to dictate what the rest of us can do (and what statues we may see).

Across the country, mobs are tearing down statues in recent days, and not only of confederate figures. In addition to three torn down in San Francisco, a statue of George Washington was also torn down in Portland. So far as I’m aware, no one has been arrested for any of these actions.

Serra, who was apparently deemed woke enough in 2015 to have California Democrat Gov. Jerry Brown defend him, and House Speaker Nancy Pelosi and then-Vice President Joe Biden join Pope Francis in a visit to the statue of Serra in the Capitol, is now apparently blacklisted.

Activists scrawled “stolen land”  on former base of the Serra statue—an ironic charge from a group of law-breaking thieves who just stole from locals a public statue no one had voted to take down nor had any legally-elected lawmaker opted to remove.

Between the statue of Serra in the U.S. Capitol and news that city of Ventura, home to one of Serra’s missions, is considering removing a statue of him, there’s no doubt this debate will continue to rage.

So let’s look at Serra’s actual life and legacy—which shows he was hardly some monster who sought to hurt California natives.

Serra, like many religious people, genuinely believed he knew the path to salvation and eternal life—and that was something he dedicated much of his adult life to sharing with Californians.

That may not “make sense” to our increasingly secular mindset, where we seem to worry endlessly about everything and anything except whether we have an eternal destiny, and if so, what we need to do to work toward that.

But because it is unfathomable to some does not mean that it was rooted in cruelty.

Mgsr. Francis Weber, author of “Blessed Fray Junipero Serra: An Outstanding California Hero,” wrote about Serra’s treatment of Native Californians in a 2015 article published on the website of Knights of Columbus, a Catholic fraternal organization. “Serra showed himself to be a defender of the Indians’ human rights in 1773, when he journeyed from California to Mexico City to personally present to the viceroy a Representación. This document, which is sometimes termed a ‘Bill of Rights’ for Indians, was accepted and implemented,” wrote the archivist emeritus of the Archdiocese of Los Angeles.

Weber also disputed that Serra was an enthusiastic participant of Spain’s political goals for California, writing:

Junípero Serra, for example, did everything he could to keep the military from having direct contact with the Indians. In many cases, he and other friars concentrated their energies on doing what they could to alleviate a difficult situation. In short, the natives were destined to change for better or worse; the missionaries strove to assist them in changing for the better.

It is sometimes assumed that the Indians in California had been living in some sort of idyllic lifestyle, akin to that of Eden. Contrary to this and related myths, the Indians were attracted to the food and quality of life that the missions provided, when compared to their original state.

When Mission San Diego was burned down and destroyed and the chief priest brutally murdered–stoned and clubbed– Serra called for mercy for those involved.  “Let the murderer live so he can be saved, which is the purpose of our coming here and the reason for forgiving him,” Serra wrote in a letter to a political leader, according to the 2015 book, “Junípero Serra: California, Indians, and the Transformation of a Missionary.”

“Help him to understand, with some moderate punishment that he is being pardoned in accordance with our law, which orders us to forgive offenses and to prepare him, not for his death, but for eternal life,” Serra added.

In that same letter, he made it clear that if he ever faced the same death as the priest at Mission San Diego, he did not want death for his killers. “If the Indians were to kill me, whether they be gentiles or Christians, they should be forgiven,” the priest wrote.

Or take the story of Ruben Mendoza, an archaeologist and professor at California State University-Monterey Bay.

Growing up, Mendoza hated the California missions to such an extent he requested permission from a grade school teacher to make another project instead of constructing a diorama of a California mission, as his classmates were doing. In 2015, Mendoza told the Los Angeles Times he inherited his attitude from his father: “Over and over, he claimed Catholic missions were cancers that Spain brought to the New World,” Mendoza recalled.

But as the years passed, Mendoza found himself having a change of heart. The Los Angeles Times reported:

“Serra endured great hardships to evangelize Native Californians,” [Mendoza] said. “In the process, he orchestrated the development of a chain of missions that helped give birth to modern California.”

Flogging and shackling were common punishments for Indians in Serra’s missions, Mendoza said. But documentation also shows that Serra felt Indians stood a better chance of surviving depredation by Spanish soldiers and colonists if they were brought into the fold of the missions.

“The missions were not slave plantations like those of George Washington or Thomas Jefferson,” Mendoza said. “They were communes in which friars and Indians worked side by side and consumed the products of their labor.”

Ultimately, Mendoza told the Times, “Serra was far from perfect …Yet we are beneficiaries of this man who believed that poverty, chastity and obedience would open the gates of the kingdom of heaven to Native Californians.”

Now this is speculation, but would you guess that any of the statue destroyers of Serra knew any of this about him?

No person is perfect. But Serra was hardly some cartoonish villain. He was a man who genuinely loved the native Californians he ministered to, and who choose to honor his faith’s tenets of forgiveness even when tested. He left his home country in order to be a missionary, driven by the desire to bring salvation to others.

A small group of rogue criminals should be not allowed to dictate the fate of  statues in America’s parks and cities. It’s time for law enforcement to enforce the law. For those who wish to tear down statues, use the legal process—and if you’re as much on the right side of history as you seem to assume, no doubt others will support you.

“Father Serra had a motto which inspired his life and work, not just a saying, but above all a reality which shaped the way he lived: siempre adelante! Keep moving forward!” said Pope Francis during the 2015 canonization ceremony for Serra in Washington, D.C.

Americans might have something to learn from that attitude of Serra’s. More and more we seem fixated on the past, not the future. While we should grapple with our history, and especially the sin of slavery, that does not mean such grappling should come to the exclusion of looking forward. If the activists believe there are real wrongs in today’s America, they should focus on fixing those, not destroying statues.

Muhammad Ali Jr., the son of the late boxing icon Muhammad Ali, told The New York Post in an hour-long interview that...