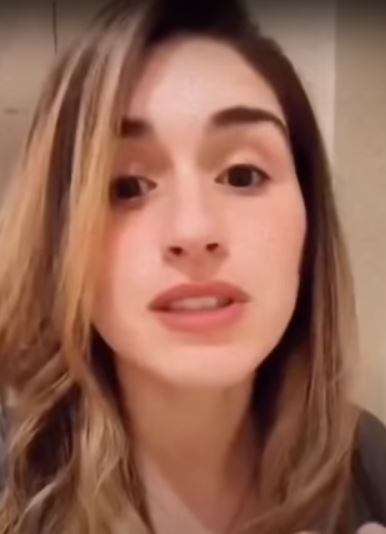 Over 100 statues have been destroyed, taken down or vandalized in America in the last three weeks.  We’re watching the Bolshevik Revolution happen in real time.

The statues included Catholic saints, Confederate Generals, Christopher Columbus and the Founding Fathers, the attempt to change our National Identity.

It can happen here.

That’s the warning from a young woman from Venezuela, who has seen the statue-topplings before — and the street-renamings, (and the flag-alterings, and the name-changings) along the destruction of history, and knows exactly where it leads.

She made this powerful video here:

Venezuelans recognize signs of a communist takeover better than almost anyone

(p.s. that accent is ?)pic.twitter.com/UJSjmfDXCo

“Why do I even worry about some silly little statues coming down?  Or some silly little street names changing?  Why do I care?  It’s because the last time I didn’t care about this, I was a teenager.  I have already lived through this thing, when I was living in Venezuela ” she begins.

“Statues came down, [Hugo] Chávez didn’t want the history displayed.  Then he changed the street names, then came the (school) curriculum, then some movies couldn’t be shown on certain TV channels.  And so on, and so forth…

She concludes: “And there’s clearly a lot of people wanting to destroy the U.S.”

Why is what she says so powerful?  Because it’s true.

It really happened that way in Venezuela.  The statue-topplings began in 2004 and were dismissed then as disturbing but still largely a Chavista clown show for the cameras at the time.

When I visited Venezuela in late 2005, the trajectory of her warning — from statue-topplings to curriculum change, was advancing.  I was privileged to experience the “curriculum” changes that followed firsthand from the red-shirted Chavista “Bolivarian Circles” in the shantytowns — where they invited me to come in and sample the communist propaganda — conducted by 1960s backwash professors of complete ignorance but total ideological zeal, to bored, disconsolate peasants who simply wanted the paycheck that came at the end for attending.

I also recall the dismissals of anything truly terrible happening at the time.  I went to an investment banking conference in Caracas, where the suits said the government was “very strong” but there was nothing to worry about, things would eventually correct themselves, and in any case, there was still money to be made for the bold.

I also talked to the small shopkeepers, their walls sprayed with Marxist FARC graffiti, who told me exactly the opposite.

Among many Venezuelans, there were stories about flight.  There was terror about crime and lawlessness and criminals being allowed to rampage to keep the population docile.  There were conversations about whether it would be wise to collaborate with the CIA.  There were warnings about not talking too loudly, even in English, in restaurants.  There was resigned talk about stolen elections — from the people who actually had them stolen from them.  There was talk about what families should do if someone were to be taken in a kidnapping.  There were Cubans there, too, exiles who fled the Castro regime and made a new life for themselves in Venezuela, who made the same warnings this young woman made, about where the statue-toppling was going to lead.

It was a helluva lot.  But there was always sense back then, in 2005, that life was still normal, that what was causing unhappiness was still recoverable if they could just protest and vote hard enough.  Faucets would work.  Police could be called.  Newspapers would be delivered.  Some of the media coverage was still untainted.  Mail would be delivered.  Elections could be won.

And here’s the scary thing she didn’t bring up.

Who are the people wreaking havoc on the U.S. with the statue-topplings?  Who are their leaders?  Who is causing this turmoil so redolent of what happened in Venezuela?  The Black Lives Matter leaders are people who openly worship what’s going on in Venezuela.  They’re, in their own words, “trained Marxists,” and they’ve made pilgrimages to Caracas itself, even as the rest of the world could see what a disaster it became.  They take Venezuela as not a warning, but a model.

In December 2015 Black Lives Matter sent a delegation, headed by the organization’s co-founder, Opal Tometi, to act as observers during the Venezuelan Parliamentary elections of that year. The Maduro regime did not allow accreditation for observers from the Organization of American States, the UN, or the EU. The only accredited observers where from regimes and organizations friendly to the “revolutionary cause.”

Later that same month Tometi penned an article where she espouses, word for word, the regime’s standard text for international propaganda. “In these last 17 years, we have witnessed the Bolivarian Revolution champion participatory democracy and construct a fair, transparent election system recognized as among the best in the world ,” wrote Tometi about one of the world’s most corrupt voting systems in history.

…and as I wrote about earlier this month:

Thus far, there have been accurate-looking comparisons of these riots and loot-fests hitting the U.S. on a mass scale to the doings of the Palestinian Authority and parallels to the events of the Russian and French Revolutions.  They are useful as pointers.  But the one place that really shows evidence of instigation is the failed state of Venezuela and its controlling agent, Cuba.  In this case, it’s not just the similarities in the end result — the mass riots that engulfed much of South America’s conservative-led states last year are remarkably similar to what is happening now in the States.  There’s actual evidence of collusion.

Here are some photos of Black Lives Matter founder Opal Tometi whooping it up with Venezuela’s malevolent dictator in Harlem[.]

But what she said was true.

And the picture they have planned for us, based on this woman who knows firsthand, is extremely destructive, and way beyond ugly. One only hopes that somehow, its excellence and power will ensure it be heeded. Her last line: “And there’s clearly a lot of people wanting to destroy the U.S.” is probably the most chilling of all.

Elizabeth Rogliani Otaola: I had friends who told me it’s just the Confederate statues. And I said ‘no’ it’s not going to be just the Confederate statues just wait and see. This is a slippery slope. The next thing is going to be all the symbols of the United States, the Founding Fathers are going to be attacked, religious symbols are going to be attacked. And, the next, probably museums. Anything can be attacked if you just let it happen. If you just let the first ones come down, nothing, there’s no limits to whats next… It’s a cultural revolution. It’s an attempt to change the national identity. They’re trying to change the system.

Andy Ngo, the editor at large for the Canada-based Post Millennial, who was badly beaten by Antifa in June 2019,...