The best method for electing the president of the United States, debated by the Founding Fathers, is a bone of contention generations later. Today, many call the Electoral College outdated. But Carly Terry, a new high school graduate from Nassau County, Florida, argued in an award-winning essay that the Founders settled on the Electoral College for a reason, and it remains the best way to elect the president. 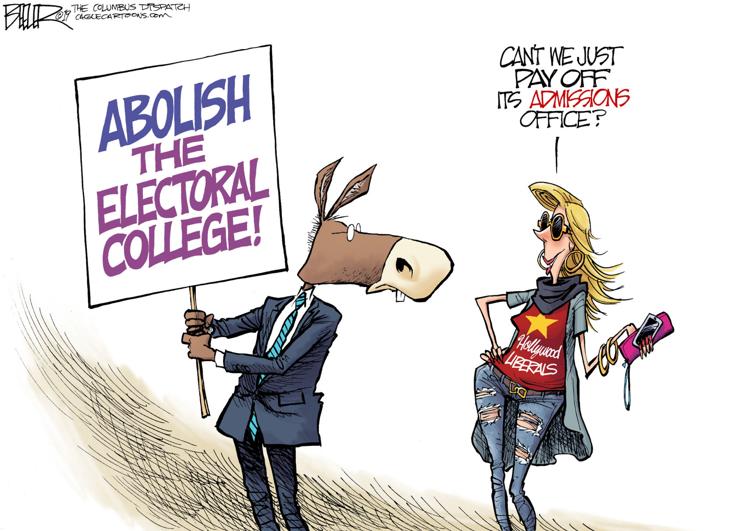 Also on today’s show, we share your letters to the editor and a good news story about the prayer gatherings taking place around the country since the death of George Floyd.

Listen to the podcast below or read the lightly edited transcript.

“The Daily Signal Podcast” is available on Ricochet, Apple Podcasts, Pippa, Google Play, and Stitcher. All of our podcasts can be found at DailySignal.com/podcasts. If you like what you hear, please leave a review. You can also leave us a message at 202-608-6205 or write us at [email protected] Enjoy the show!

Virginia Allen: I am so pleased to be joined by Howard Pines, one of the founders of the U.S. Constitution Scholarship Foundation, and Carly Terry, the winner of the $10,000 college scholarship from the foundation for her essay on the Electoral College. Mr. Pines, Carly, thank you both so much for being on the show today.

Howard Pines: Glad to be here.

Allen: I’m really excited to talk with you, Carly, about your essay and dive into why you wrote it, and more importantly, why the Electoral College is actually still the best way to elect the president today. But first, Mr. Pines, can you just explain a little bit about the U.S. Constitution Scholarship Foundation—what it is, what your mission is?

Pines: Yeah. About four years ago, in 2016, after Justice [Antonin] Scalia was supposed to come to speak, and actually passed away before, we came up with the idea of doing something for the students in regard to the Constitution because we didn’t feel it was being taught. The New York Times actually had an article saying that it hadn’t been taught in the schools.

The first year there were two winners and since then there’ve been five winners. And 4 of the 5 winners get $5,000 and this year the top winner got $10,000. And the essays are first reviewed by the board. There were 33 of them this year that were submitted and the board came up with 12 that they submitted … to our Essay Committee headed up by a judge, Robert Foster.

And it was very interesting. The board and the judges all came to the same consensus about the No. 1 winner, who was Carly Terry.

Pines: Each year we come up with a different question, and this year, there was a number of elements of the question, but it had to do with the Electoral College and whether or not it was still the best way of going about the election.

In Case You Missed It:  The Social Justice Warriors’ Takeover of Newsrooms

Allen: And who can submit an essay? Is it open to only certain students or the whole country? [What are] the qualifications?

Allen: Wow. That’s great. So, Carly, I want to turn to you now and ask you a little bit about your decision to write the paper in the way that you did. And, as you learned about the scholarship fund and decided to write this paper, what fascinated you about discussing that topic of the Electoral College?

Carly Terry: At first I just really didn’t know a lot about it, but I was taking AP government and politics this year and we’d been taught a little bit about the Electoral College, but not very in-depth.

Our teacher kind of skipped over it and basically said, “When you’re looking at the election results, just pay attention to the Electoral College, not the popular vote.” And so there was a lot I didn’t know about it, a lot I didn’t understand, and I was really confused.

So, originally, I had the opinion of, “Why do we even have it, it’s so confusing?” So writing this essay was a huge learning experience because I had to do a lot of digging and it taught me so much and I really changed my opinion by the end.

… Once I learned more about it, I was very excited to be writing the essay and defending the Electoral College and hopefully explaining it to people who were kind of like me and didn’t really get it and just thought it’s really confusing.

Allen: Yeah. Oh, that’s so interesting. So while you were doing your research, what were some of those things that you read that maybe surprised you or really led to your opinion changing?

Terry: At first it was just the original context of why the Founding Fathers chose to go with this and how they came up with it, how it’s not designed to be a perfect, “let’s fix every detail” kind of thing, because nothing’s perfect.

But it was something that they really thought through hundreds of years from now how this affects the country, and it was the best decision that they could come up with at that time. So that was just interesting.

And then just seeing how it’s something that really affects smaller rural areas and helps them to be represented.

Allen: Can you explain that a little bit more? What do you mean by that? How does the Electoral College actually help what we kind of refer to as “flyover America,” states like Kansas and so on and so forth and small towns out there to have more representation in an election?

Terry: Because then presidential candidates and leaders cannot just look at the big cities and target them because if it was just based on popular vote, then … they could just be elected based off of the most votes. But with the Electoral College, they have to target every state.

They can’t just focus on swing states. They can’t just rely on states that are always one way or the other. They have to be considering the entire country. And if they just targeted the larger cities, then they just would not [win]. With the Electoral College, if the state itself voted on a candidate, then they would lose. That’s the best way to explain that.

Allen: Yeah, I think you explained that very well. I love that you, really, in your essay, … tackled some of those common arguments that we hear against the Electoral College head-on.

And one of those that we hear is, “The system is just kind of dated and it’s old.” Because you say in your paper that the Founders were concerned that individuals across the country, that they just wouldn’t have access to really know who the candidates were. They wouldn’t have the right information. And obviously, today, everyone has so much information just right at their fingertips, on their phone, and we’re always being bombarded with information, so we’re now educated voters.

But even giving that, it still seems like the Founders understood that there would be a time in history when people would have that access to information but yet they still all agreed that this was the best option, even though, like you said, it wasn’t perfect.

Terry: Yes. And even today with the internet and a ton of access to information, anyone can say anything out there and put whatever they want on Facebook, and the potential for a kind of mob rule mentality is almost way more possible today than it was back then because you can see very strong opinions all throughout just by turning on the TV, and especially for teenagers.

It’s very easy to just believe the first thing you hear and that affects your decision to vote, who you vote for, whether you vote or not. And so this process of the Electoral College still helps to prevent a mob rule mentality.

Allen: That’s so fascinating. Mr. Pines, I want to ask you, do you think that the Founders knew that this would remain such a controversial topic for years and years to come?

Pines: I don’t know. I think that they realized even back then that they were very worried about somebody who was very charismatic taking over and getting the votes.

It seems like [James] Madison especially had a very good vision of the future and knew this was a danger and that they wanted to also, of course, … get the smaller states protected [so] that they had some leverage in getting an election.

Allen: Yeah. So we’re seeing today, though, that the system does still work and yet it’s so highly debated. This is really a question for either of you, but why do you think we are seeing such a push for moving away from the Electoral College?

Pines: I think that, obviously, the cities would like to have more power and they have the most people and people who believe, sometimes, we get confused, that we’re just a total democracy and we’re really a republic. And people think that the numbers should control.

In Case You Missed It:  USA a FAILED STATE no police,law leadership,free speech, functioning markets, equal protection under the law…

Obviously, as a republic, it’s a little bit different than that and people don’t all realize that but they would like the popular vote to control. And I think the other side of that is we don’t want the popular vote to always control. We want all the states to have rights.

Allen: Absolutely. Carly, do you want to add anything on that?

So I think that’s one of the reasons that it happened a little more frequently in the past election and so maybe that contributed to more people questioning it. But seeing that, overall, it’s still very successful after 200 years, it still make sense to keep it.

Allen: So, Carly, what would you say to your peers who are maybe like, “Oh, I just don’t know. It just seems kind of unfair”? We so often, I think, kind of hear that argument of, “But it would just be better if … one person’s vote equaled, actually, one vote toward the president.” What’s your response to your friends that maybe make that argument to you?

And a just popular vote, a city that has a certain value or view, the major view of that city, if it was contrasted with the view of a very small town, that small town could be completely left out of any kind of laws or decisions that are made and that would still affect the major city too.

Allen: Yeah, yeah. It really creates that balance. It’s so interesting talking about that representation. So, Carly, congratulations to you. You won the $10,000 scholarship. Can you tell us a little bit about your college plans and what the future holds for you?

Terry: Thank you. I’m planning on going to the University of Florida and probably majoring in advertising. And I’m in UF Innovation Academy so I’ll be doing a minor in innovation and hoping to just use both of those, just learning advertising innovation to help promote brands that align with my beliefs and that I can help make a difference through promoting things that will help others.

Allen: Great. Well, Carly, all the best to you. And Mr. Pines, thank you so much for the work that you do to further liberty at the U.S. Constitution Scholarship Foundation. Just really, really appreciate you all coming on the show today.

The end of apartheid in South Africa and the removal of white from authority did not end the violence or...