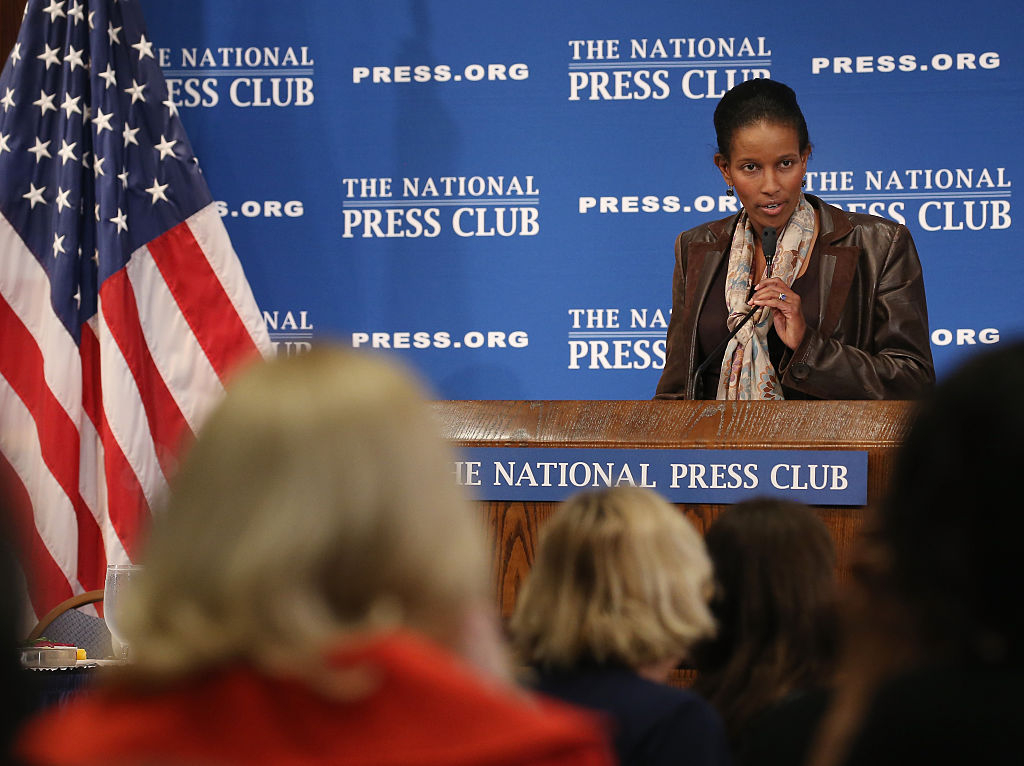 Ayaan Hirsi Ali, who fled her homeland of Somalia and now lives in the US: “What the media do not tell you is that America is the best place on the planet to be black, female, gay, trans or what have you. We have our problems and we need to address those. But our society and our systems are far from racist”. (Photo by Mark Wilson)

The United States abolished slavery 150 years ago, and has affirmative action for minorities. It is the country that elected a Black president, Barack Obama — twice! Yet, a new movement is toppling one historic monument after another one, as if the US is still enslaving African-Americans. Activists in Washington DC even targeted an Emancipation Memorial, depicting President Abraham Lincoln, who paid with his life for freeing slaves.

Today slavery still exists in many parts of Africa and Middle East, but the self-flagellating Western public is obsessively focused only on the Western past of African slavery rather than on real, ongoing slavery, which is alive and well — and ignored. For today’s slaves, there are no demonstrations in the streets, no international political pressure, and virtually no articles in the media.

“We must not forget that Arab-Muslims have been champions in this field,” Kamel Bencheikh, a Muslim poet, wrote in Le Matin d’Algerie.

“Emirs and sultans bought entire convoys of young black ephebes to make into eunuchs to guard their harems. And this continued with Ottoman emperors…. Even today, Mauritania and Saudi Arabia are still housing their own Ku Klux Klan. Slavery is still the order of the day in Nouakchott [Mauritania]. As for Riad, all you have to do is find out about young Asian girls that the potentates hire as maidservants”.

An investigation by BBC Arabic found that domestic workers in Saudi Arabia are even being sold online in a slave market that is booming.

According to Bencheikh, George Floyd’s death was an opportunity for many in Europe to turn a respectable fight into an unimaginable depravity.

“So, on the Place de la République in Paris or the Avenue Louise in Brussels, there are vengeful thugs, fed with hatred, taking advantage of the allotments that these two countries offer them, and attacking the past of those who enabled them to free themselves from their dictatorships…

“In France and Belgium, we do not execute apostates, crucify heterodox people, throw stones at unfaithful women, spit at heretics…

“… this anti-racism is biting its tail to turn into racism. You only have to see the angry crowd, the drool on their lips, to realize that we are dealing with people who have come to insult the white man guilty of having had, more than a hundred years ago, inappropriate gestures or shameful thoughts, and to insist, like the wolf in La Fontaine who said to the lamb: ‘If not you, then your brother’… Totalitarianism is among us again”.

He calls it a “Stalinism of communitarianism (sectarian politics) that makes itself into an indigenous victimization”. People who fled from Bouteflika and Gaddafi, the oppressors and tyrants of Kinshasa and Niamey, “come and spit incomprehensible hatred in Paris or Brussels”.

Bencheikh’s article shows just one brave group of dissidents in the Islamic world who are defending the West better than the Westerners are doing. These dissidents love freedom of expression and conscience; they know the difference between democracy and dictatorship; they enjoy religious tolerance, pluralism in the public sphere, and they outspokenly criticize the practice of Islam from which they fled. They also know that arousing historic and racial resentment is a dangerous game. For political Islam, their voices are revealing and devastating. For Western multiculturalism, they are “heretical” and annoying. Le Figaro pointed to this paradox: “Seen by their communities as ‘traitors’, they are accused by the elites in the West of ‘stigmatizing'”.

In The Spectator, Nick Cohen, explained:

“In the liberal orientalist world view the only ‘authentic’ Muslim is a barbarian. A battery of insults fires on any Muslim who says otherwise. They are ‘neo-conservatives,’ ‘native informants,’ and ‘Zionists’: they are as extreme as jihadists they oppose, or, let’s face it, worse…”.

Like Bencheikh, Algerian author Mohammed Sifaoui reminds all of us that “Mauritania, in North Africa, is the most slavery-supporting country in the world today. Qatar in the Middle East is as well, just as much, [as is] Saudi Arabia, under the banner of the Guardians of the Holy Places of Islam”.

The author Ayaan Hirsi Ali, who fled her homeland of Somalia and now live in the US, writes:

“What the media do not tell you is that America is the best place on the planet to be black, female, gay, trans or what have you. We have our problems and we need to address those. But our society and our systems are far from racist”.

Black, female and gay, the apex of “intersectionality.” According to Andrew Sullivan:

“‘Intersectionality’ is the latest academic craze sweeping the American academy. On the surface, it’s a recent neo-Marxist theory that argues that social oppression does not simply apply to single categories of identity — such as race, gender, sexual orientation, class, etc. — but to all of them in an interlocking system of hierarchy and power. ” 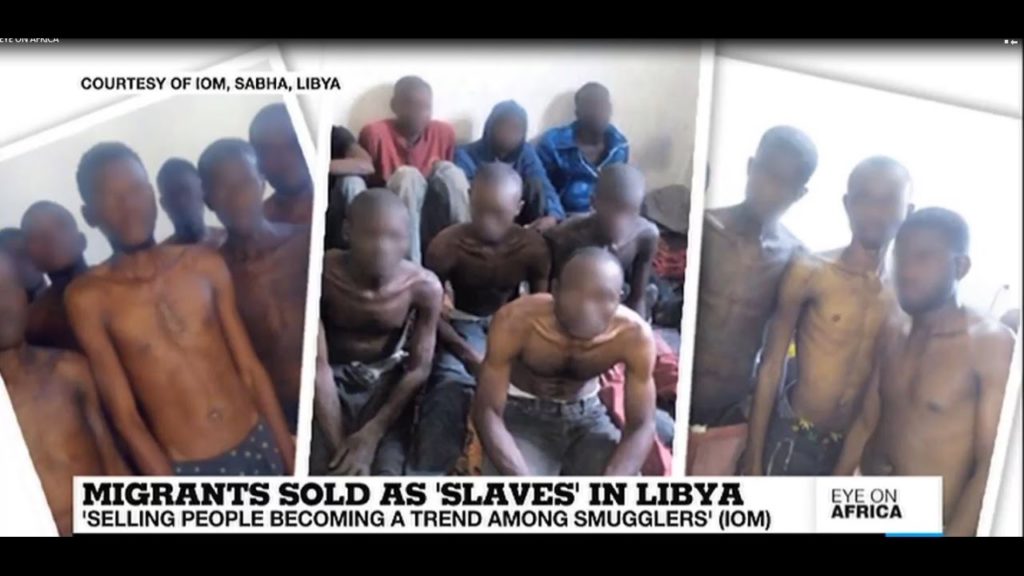 For the intersectional activists, the US is the world’s biggest oppressor. Not Saudi Arabia or Iran. Hirsi Ali, who fled Somalia and experienced female genital mutilation, knows about oppression better than anti-statues activists. According to Hirsi Ali, writing in The Wall Street Journal:

“When I hear it said that the U.S. is defined above all by racism, when I see books such as Robin DiAngelo’s ‘White Fragility’ top the bestseller list, when I read of educators and journalists being fired for daring to question the orthodoxies of Black Lives Matter—then I feel obliged to speak up… America looks different if you grew up, as I did, in Africa and the Middle East”.

Writing in Le Monde and Le Point, Algerian writer Kamel Daoud indicted this hypocrisy. “There is an instinct for death in the air of the total revolution”, Daoud notes.

“According to some, the West is guilty by definition, we find ourselves not in a demand for change but, little by little, in [a demand for] destruction, the restoration of a barbarity of revenge”.

In Le Point, Daoud states that “with the great announcement of antiracism, the Inquisition returns”.

Daoud has been accused by twenty leftist academics, in an appeal in Le Monde, of “orientalist clichés” and “colonialist paternalism”. This new accusation of racism serves publicly to shame, mark and disqualify a politician or an intellectual who comments with too much frankness on the damage of multiculturalism.

“The only racism I suffer from comes from North Africans. For the Algerians, I am a Moroccan whore. For Moroccans, I am an Algerian whore. For both, a ‘whore of the Jews'”. 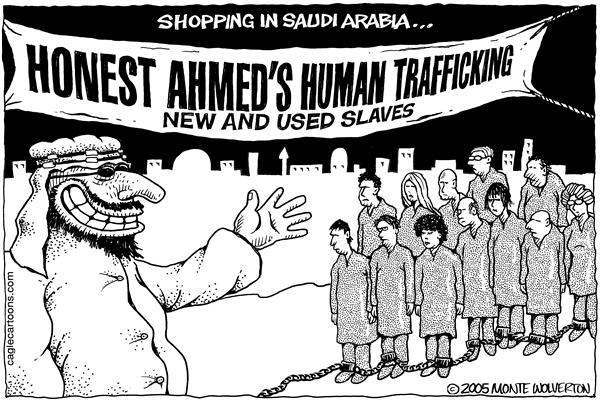 Arabs threaten other Arabs for speaking the truth about real racism and Islamization. They are the invisible victims of racism in France. Rhazoui claimed that “France is one of the most tolerant and least racist country in the world” and that real threat is not racism, but communitarism [importance placed on groups rather than individuals], denounced as well by French President Emmanuel Macron.

“The new anti-racism is racism disguised as humanism (…) What resonates in this discourse is the prison of victimization….It implies that every white person is bad — as witnessed by the recent debunking of the statues of Victor Schoelcher, father of the abolition of slavery, in Martinique — and that every black person is a victim”.

While the economist Thomas Piketty, in Le Monde, invited the West to make amends for its colonial past, the Franco-Senegalese author, Fatou Diome, called for the abandonment of a discourse on decolonization:

“It is an emergency for those who do not yet know that they are free. I do not consider myself colonized. The catchphrase on colonization and slavery has become a business”.

The “ideology” is simple: colonialism is supposedly still at work, people from formerly colonized countries continue to be oppressed, in particular Muslims who are said to be targets of a “racist” and “Islamophobic” hate. In this view, “White Western males” are always the oppressors, and the minorities are always victims.

A prominent anti-racism campaigner, Rokhaya Diallo, has said that France is “racist” in an opposition between “the dominator” and “the dominated”. It is a view that sees racism everywhere, especially where it does not exist. It has also produced many of the disasters of multiculturalism throughout Europe by making it impossible to criticize the consequences of mass immigration and Islamist separatism. The French author Pascal Bruckner has called this stance “imaginary racism“. It is a penitential creation that leads the public in the West — even though presumably no one in the West either was a slave or had a slave — to believe that anti-Western hatred is deserved.

The border between this Marxist view, in which someone always has to be a victim, has become porous with Islamism. In the movement named after Adama Traoré, the “French George Floyd“, you will find an alliance of organizations such as SOS Racisme and Muslim Salafists. Human rights organizations also rally with the “Union of Islamic Organization of France”, considered fundamentalist.

Manuel Valls, the former French prime minister, in an interview with Valuers Actuelles magazine said, “Human rights associations have been lost and have opened the doors to Tariq Ramadan”. This instead of taking the side of the many great Muslim reformers. Ayaan Hirsi Ali writes:

“Reformers such as Asra Nomani, Irshad Manji, Tawfiq Hamid, Maajid Nawaz, Zuhdi Jasser, Saleem Ahmed, Yunis Qandil, Seyran Ates, Bassam Tibi and Abd al-Hamid al-Ansari must be supported and protected… These reformers should be as well known in the West as Solzhenitsyn, Sakharov and Havel were generations earlier.” Instead, so-called human rights associations, politicians and the media have chosen to back political Islam.

By contrast, a group of 12 writers put their names to a statement in the French magazine Charlie Hebdo warning against Islamic “totalitarianism”.

“After having overcome fascism, Nazism, and Stalinism, the world now faces a new global totalitarian threat: Islamism. We, writers, journalists, intellectuals, call for resistance to religious totalitarianism and for the promotion of freedom, equal opportunity and secular values for all”.

Among the 12 signatories, eight came from the Islamic world.

These anti-Islamist Muslim intellectuals were not born free; they fled dictatorships for democracies, where they still suffer death threats and abuses, but where they are far freer and prouder of the West than those Westerners who know only freedom but now practice a dreadful feeing of guilt — mostly for things they did not do.

The West not only turns its back the new slave markets; the UN Human Rights Council actually welcomes states such as Sudan, where tens of thousands of women and children from mostly Christian villages were enslaved during Jihadi raids; Kenya and Nigeria, where the police last fall rescued hundreds of men and boys chained in an Islamic school; Pakistan, where Christians are condemned to servitude, and Mauritania, where two in every 100 people are still held as slaves. It is the same UN Human Rights Council that now, thanks to pressure by African countries, wants to investigate “systemic racism in the US”. US Secretary of State Mike Pompeo noted:

Real slave traders and racists — those who believe Western societies and values should not exist at all — most likely look at the current Western self-flagellation and cheer their approval.

Giulio Meotti, Cultural Editor for Il Foglio, is an Italian journalist and author.

In Case You Missed It:  The Lancet, which scammed the world by publishing a rigged study against ivermectin, now says climate change is a “medical emergency”
Posted in Freedoms and tagged Africa, blacks, BLM, GeorgeFloydProtests, Islam, Middle East, Slavery.

How the Left Creates Fake Studies to Fabricate Right-Wing Terrorism

By Bode Lang After weeks of violence, Democrats have some public relations needs to redirect attention away from the awfulness of leftism. Insert...