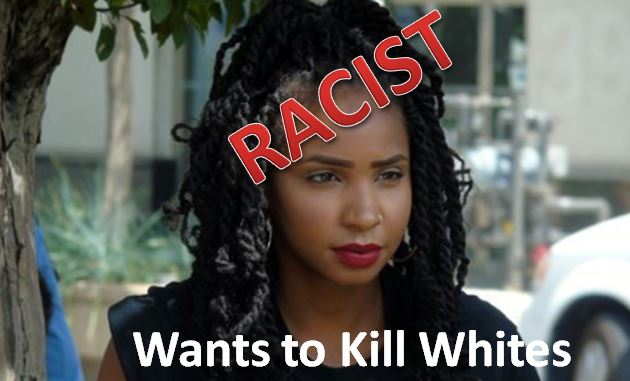 Yusra Khogali in 2016 wrote “white people are a genetic defect of blackness” in a since-deleted Facebook post.

“White ppl are recessive genetic defects. this is factual,” she said. “white ppl need white supremacy as a mechanism to protect their survival as a people because all they can do is produce themselves. black ppl simply through their dominant genes can literally wipe out the white race if we had the power to.”

Khogali asserted that white people have a ‘higher concentration of enzyme inhibitors which suppresses melanin production’ adding that ‘melanin is important for a number of things such as strong bones, intelligence, vision and hearing.’

In a separate Twitter post, Khogali tweeted, “Plz Allah give me the strength to not cuss/kill these men and white folks out here today.”

A charming message from the head of BLM Tornoto, who has been honored (a few years ago) by the city of Ontario for exemplary leadership. pic.twitter.com/AVtj86RJZ9

In 2016 Yusra Khogali responded by lashing out at people who criticized her for admitting she wants to kill white people.

“Somehow a tweet I wrote out of anger months before our protest began has become a bigger media story than our protest’s many and profound accomplishments,” Khogali, co-founder of the Toronto chapter of Black Lives Matter, wrote in a Toronto Star column in 2016.

The noise surrounding this tweet has also drowned out the discussion we sought to spark about the black lives of those who have died at the guns of police in this country.”

Another Black Lives Matter leader recently admitted she is a trained anti-white Marxist.

The Democrat-media complex is bowing down to these BLM Marxist militants who are openly admitting they have the desire to kill white people.

“A social media post has resurfaced from a Black Lives Matter Toronto co-founder in which she argues that white people are ‘sub-human’ and are ‘recessive genetic defects.’” https://t.co/Y0eVGYKFio

There is not a single voice on television recently that has a better grasp on American culture and current affairs...