We are at war, believe it or not, like it or not. Contrary to what the media wants you to believe, it is not Black vs. White, but Left vs. Right. Forces have been gathering and preparing for decades with the intention of destroying our country, and taking over the government. They have been doing it from the inside, knowing there was no chance for a military solution.

Political differences in America are not a new phenomenon. We’ve had our share. But, we are now living in a time when the opposition is now openly in disagreement on the very basics of what our country’s values are. The Democrat Party has been taken over by these forces and has clearly demonstrated their desire to establish a Democratic-Socialist state, a far cry from our founding. Any resistance within the Party to their agenda has now been silenced. Their hatred for our country in recent years has shocked even the hardened apolitical. Have we reached a point of irreconcilable differences? Quite possibly, but it has always been irreconcilable to the leaders on the Left. We just were unaware.

The Left insist on tearing down America

What the Left is demanding is far from where we have been. Instead of making America great again, they insist on tearing it down. They are demanding we shed our Judeo-Christian foundation. They want a new Constitution, one where rights are granted by government, not by God. All statues, monuments of our past, institutions, are to be destroyed. Even statues of abolitionists. All vestiges of our founding and history erased. They want a new country, a secular socialist state where everyone is equal and to remain so, regardless of talent or personal industry. They want the electoral college scrapped, mail-in voting installed, even though rife with fraud, or because of it. They are demanding the voting age be lowered to 16, limits on free speech, and of course, no right to self-protection. They want the end of private property, capitalism, meritocracy, everything that is uniquely American. In the interim, they are willing to shed any constitutional protection if it grants them short-term gain.

How can we survive as a nation with such disparity?

Unlike revolutions in history, there seems to be no rhyme or reason for discontent, except ignorance, lust for power, and hatred of God and country born of decades of communist propaganda in our schools and media. Our economy has been at a zenith with unemployment at record lows for nearly every American, regardless of race or gender. Wars are finally winding down, after twenty years. Taxes are relatively low. We are now energy independent. The business climate has been nothing less than exceptional. And yet, here we are.

Whether the COVID phenomenon is natural or as many call it, a plandemic, it has been weaponized and tearing our nation apart. COVID deaths are being highly inflated. As an example, many hospitals are listing motor vehicle deaths as COVID caused. This pandemic is actively being kept alive for a purpose, a very evil purpose…an undercover insurgency aided by the Deep State, a compliant media, and naive corporations unwilling to be called racist. It is all to reverse Trump’s many economic accomplishments, and put a stop to any more Trump rallies. It is to assure a Trump loss in 2020 to complete the agenda they had planned for 2016. Maybe more importantly, it will put a halt to any further investigations into Democrat insurgency and treason.

Democrat cities are being destroyed by savage mobs 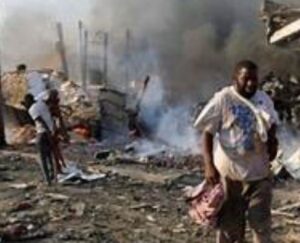 This COVID-19 appeared immediately after the impeachment failed…coincidence? At the same time, our coinage began to disappear. Merchants started asking for exact change or credit card use, better to track people’s activity…coincidence? Was the Floyd death coincidence or planned? Obama had been reseeding racism, a powerful future cover for insurrection, almost immediately after his inauguration. If Biden should win in November, I can assure everyone that COVID-19 will disappear from the front pages almost immediately.

Democrat cities are being destroyed by savage mobs. Many have forgotten why they are rioting. Bricks are being delivered, so they throw them. It’s a perverse sense of permission. Police officers are being murdered, ambushed and assaulted. Laws that assure civil order are being ignored by Democrat governors and mayors. Churches are now being destroyed or vandalized. The Left’s ‘shock troops’, Marxist organizations committed to the overthrow of our nation like BLM and Antifa, are being utilized as Democrat militia. Any loss of life, property, or livelihood suffered by Americans is deemed collateral damage.

To further the hostility and create a sort of modern witch hunt, everything has been politicized by the Left…the Constitution, healthcare, education, religion, our culture, capitalism, meritocracy, private property, home ownership…It’s all fair game. Every slight is now either racism, misogyny, white supremacy, homophobia, whatever.

How can we compromise with such brutish people? You don’t. You defeat them. Peaceful protests are fine, but everyone who is violent and a danger to our republic needs to be found and punished quickly. Every high-ranking federal employee that is deemed an insurgent should be arrested and tried. There are plenty of prison cells available since so many convicts have been released. Other federal employees should be held to their oath or removed with a loss of pension. Any political party found to have dabbled in sedition should be dissolved. Arrest all insurgent leaders in the media, education, and especially those who have financed the sedition, Black Lives Matter and Antifa declared terrorist organizations.

Time is running out to quell this madness. The inaction of many Democrat state governors and mayors has been curious, as it has encouraged many on the street to anarchy. Much should have been done by now. Have we reached the point of irreconcilable differences where divorce or civil war will be the only action? Maybe, maybe not, but it is getting dangerously close.

In Case You Missed It:  EXCLUSIVE – ANDREW WEISSMANN PART XIV: “A Desecration of a Prosecutor… Has Disgraced Every Single Ethical Tenet that Prosecutors Hold Dear” – Rudy Giuliani on Weissmann
Posted in Tyranny and tagged ANTIFA, BLM, Revolution, Riots, United Socialist States of America.

Authored by Andrea Widburg via AmericanThinker.com, On March 20, 2017, then-FBI Director James Comey told Congress that the FBI was...