Frontpage Mag –Daniel Greenfield The victims of New York City’s leftist riots included St. Patrick’s Cathedral as the venerable 142-year-old building was defaced with obscenities and the three letters BLM for Black Lives Matter, along with “George Floyd” and “No Justice, No Peace”. 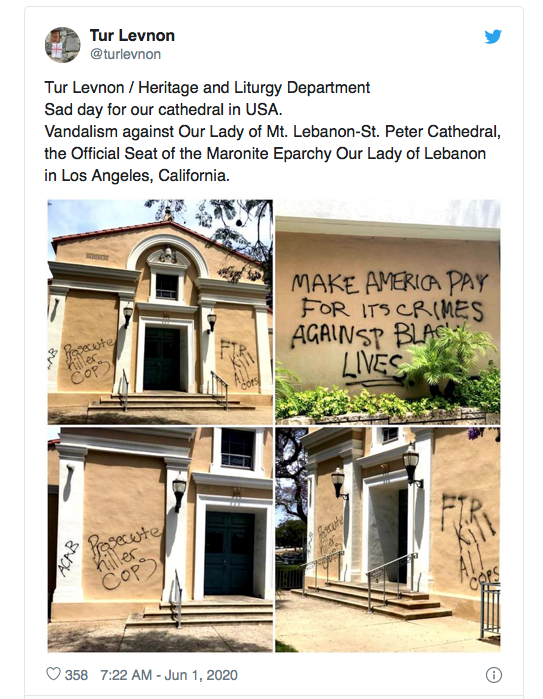 First they locked the church doors, justifying it as a safety precaution against Covid-19.  There was no resistance of note from the clerics while hapless flocks tried not to feel so lost.

Today, the only way back into church service for people of faith is to pre-register, in numbers for services  far less  in number than they were before the pandemic struck.

Since Seeing is Believing for anti-Christian leftist anarchists, they went on to decapitate and deface statues and burn down closed Churches and Synagogues with seeming impunity.

Communist fascist globalists want to make a Godless world, and that’s what their heartless anarchists are being paid to do.

How frustrating it must be for them knowing that Jesus is not just present in brick and mortar churches,, but in the hearts of believers, where He is immovable.

Jesus is everywhere, including in the hearts of His followers, who will survive locked down churches and the desecration of cherished images, as they always have done down through the ages.

How infuriating it must be for street mobs knowing that closed down churches have  gone on to make millions of Christians more prayerful than ever.

How undeniable it is that millions in the masses don’t hear their vulgar chants linking the Almighty to the F bomb, and can only hear some 2000 years later, the ugly cry of: “Crucify Him!” “Crucify Him!”

Jesus who died on the Cross for our salvation went on to live in our hearts forever.

“Here’s the rundown of attacks on the Christian church over just the last two months — ten in the last month — which coincides with the lawless rioting, vandalism, and looting at the hands of the corporate media’s and Democrat Party’s Brownshirts in the left-wing Black Lives Matter and Antifa terrorist groups

“July 16: Statue of Christ decapitated inside a Florida church

“July 12: Statue of Virgin Mary lit on fire in Boston

“July 11: Suspect arrested after detectives “say he plowed a minivan through the front door of Queen of Peace Catholic Church in Ocala, doused the foyer with gasoline and set it on fire, causing extensive damage”

“St. Junipero Serra is a specific target — he founded the San Gabriel Mission 249 years ago — because of the lies going around about his treatment of missionary Indians at the time. The truth is that St. Junipero risked his life to bring God to the North

“Anyway, remember when we were attacked as hysterics after we warned this madness would not stop with Confederate statues and monuments?

“Once you allow any kind of lawlessness, it becomes a Pandora’s box. The establishment media and Democrats know this, which is why they applauded the tearing down of Confederate statues and then attempted to gaslight the public into believing it would stop there. The Church was always the ultimate target, which is why the media are now encouraging these attacks by ignoring them.”

The BBC reports there has been a massive fire at the Nantes Cathedral in France, which is being investigated as a possible arson.

A fire at the cathedral in the French city of Nantes is believed to have been started deliberately, prosecutors say.

Three fires were started at the site and an investigation into suspected arson is under way, Prosecutor Pierre Sennes said.

The blaze destroyed stained glass windows and the grand organ at the Saint-Pierre-et-Saint-Paul cathedral, which dates from the 15th Century.

It comes a year after the devastating fire at Notre-Dame cathedral in Paris.

But the local fire chief said the fire in Nantes had been contained and was “not a Notre-Dame scenario”.

“The damage is concentrated on the organ, which appears to be completely destroyed. The platform it is situated on is very unstable and risks collapsing,” Laurent Ferlay told reporters. 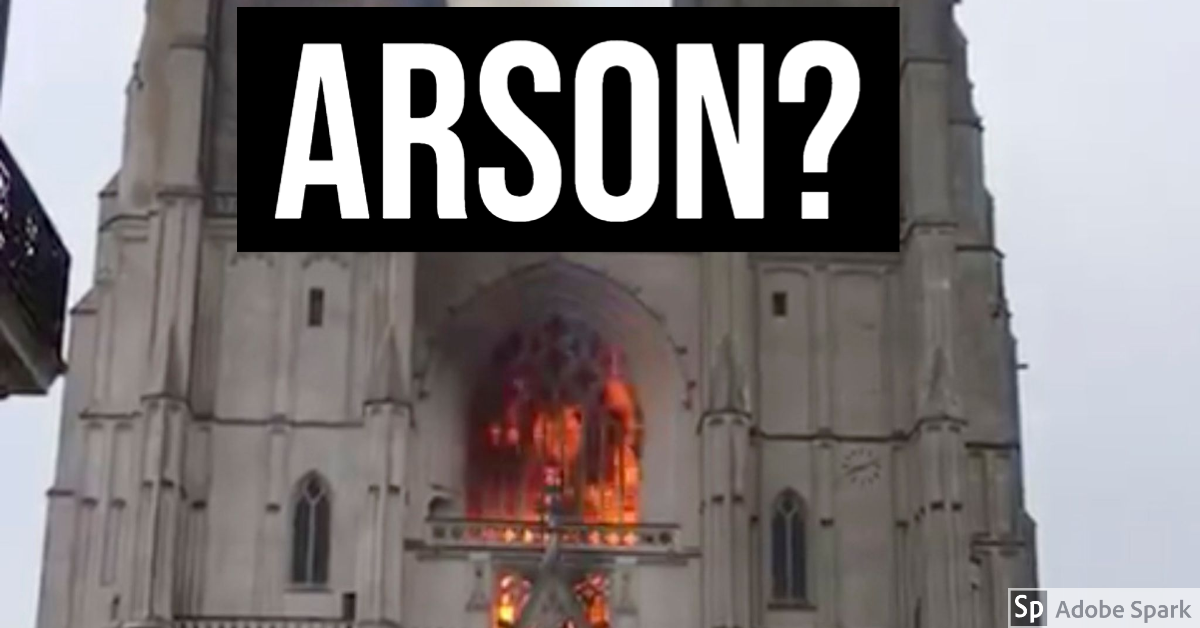 By Ray DiLorenzo We are at war, believe it or not, like it or not. Contrary to what the media wants...