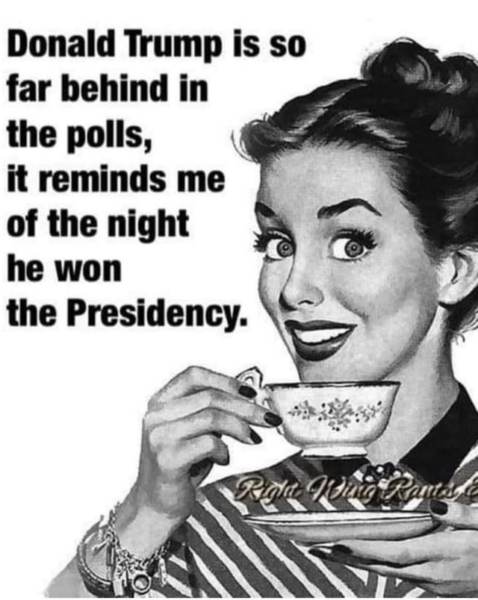 The 2020 election is shaping up much like the 2016 election. Polls show Biden in the lead just like they did for Hillary.

Although, according to GOP chairwoman Ronna McDaniel, one difference is that enthusiasm for Trump is even higher this time around.

Despite polling data that favors presumptive Democratic nominee Joe Biden, enthusiasm for President Trump is higher than it was in the 2016 presidential election, Republican National Committee Chair Ronna McDaniel said on Monday.

McDaniel said that Biden has an “enthusiasm” issue.

Biden benefits from strong support among women, non-White voters and those living in suburban areas, while Trump suffers from a lackluster performance among men and White voters.

In each state’s head-to-head matchup, the president underperformed both his 2016 vote share and his current job approval rating — and Biden’s edge is larger than the survey’s margin of sampling error.

She has been making a similar point on Twitter:

Their cell phone/landline breakdown was way off.

If you look at registration rates in AZ and FL, for example, they included too few Republicans.

Polls were wrong in 2016 and they are wrong now!

Joe Biden has struggled to get 300 people to attend an event.@realDonaldTrump drew 300,000 and $20 MILLION for one of his.

The enthusiasm behind President Trump cannot be matched! pic.twitter.com/7E61V3GMfC

President Trump is focused on leading the American people during this unprecedented crisis, and his number one priority in this decision was the safety of the people of Jacksonville, the convention attendees, and all of the American people.

Appears Democrats will  be in for another big surprise in November.

Cops pull out: Democrats in need of convention protection can now call a hippie

Democrats who have been clamoring to defund police and “reimagine” the force may soon get a small taste of what...