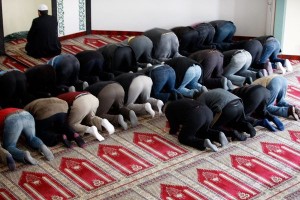 What’s with all the Barack Hussein Obama holdovers who can still be found throughout the Trump administration? It is now just a little over three months before the 2020 presidential election, and despite an alarming amount of evidence of Obama holdovers still in the Washington bureaucracy, working hard to block Trump policies, all too many of these saboteurs are still in place. One of them is an appeaser, capitulator, and Muslim Brotherhood stooge named Eric W. Treene.

The Justice Department’s “Religious Freedom in Focus” is “a periodic email update about the Civil Rights Division’s religious liberty and religious discrimination cases.” It lists as a contact the Special Counsel for Religious Discrimination, Eric W. Treene. I exposed Treene’s subservience to Muslim organizations linked to Hamas and the Muslim Brotherhood over eight years ago. What’s Eric Treene still doing there?

Back in January 2012, after receiving a huge box (in response to my Freedom of Information Act request) full of documents relating to the Justice Department’s interactions with Muslim groups linked to Hamas and the Muslim Brotherhood, I wrote that what struck me almost immediately was the casual familiarity between the Muslim groups including the Islamic Society of North America (ISNA), which has admitted its ties to the Brotherhood and Hamas, although it claims that it is no longer connected with either, and senior officials of the Department of Justice, all the way up to Assistant Attorney General Tom Perez. They discuss lunch, vacations, job changes — always with the Muslim Brotherhood groups pushing their narrative, even in these casual exchanges.

Even more striking was the servile demeanor of Eric Treene, who was then listed as Special Counsel for the Department of Justice, Civil Rights Division, and the demanding condescension of Muslim Brotherhood operatives. Muslim and Arab operatives treat Treene and Co. like an errand boy, asking them for email addresses of other contacts and setting them to perform the most menial gofer duties. The DoJ even takes lunch orders and picks up the tab, and in some cases asks them how much money they need for a little soiree they’re holding. It is astonishing.

The depth and the breadth of the penetration was astounding. The players included jihadist Nihad Awad, who declared in 1994 that he was “in support of the Hamas movement,” of the Hamas-tied Council on American-Islamic Relations (CAIR); Suhail Khan, who accepted an award in 2000 from the now-imprisoned al-Qaeda financier Abdurrahman Alamoudi; and James Yee. James Yee a Muslim terrorist at Guantanamo who was charged with sedition, aiding the enemy, spying, espionage, and failure to obey a general order. He was charged along with three others. The charges were later dropped, when Major General Geoffrey Miller cited “national security concerns that would arise from the release of the evidence.” The notorious Yee gave an interview on Syrian television in Arabic, in which he repeated Gitmo detainees’ lies of Qur’an abuse on the part of the U.S. Military

Those three and many others received a September 8, 2011 letter from Perez touting all the DoJ’s actions on behalf of Muslims, including a suit against the city of Lilburn, Georgia for resisting the expansion of a mosque and amicus participation calling for dismissal of a suit brought by Murfreesboro, Tennessee patriots against an Islamic supremacist mosque there.

In the midst of all this, Eric Treene at one point asks Mohamed Elsanousi of Hamas-tied ISNA to circulate among ISNA operatives an invitation to a DoJ seminar on “Federal Laws Protecting Religious Freedom.”

This is who the DoJ was including in its “outreach” in 2012. They wouldn’t have dreamed of ever including organizations opposed to jihad violence and Sharia oppression, such as my organization, the American Freedom Defense Initiative (AFDI) or other freedom fighters, in their “outreach.”

Trump said he was going to drain the swamp. No one, however, realized how deep and fetid it really was. He has had much larger challenges to deal with than the continued employment of Eric Treene. And so Treene is still there, and doubtless still kowtowing. Large challenges aside, the purge of the Justice Department’s civil rights division must come at some point if America is going to survive as a free society. If the Democrats win in November, a huge opportunity will have been missed, and the victory of these sinister Brotherhood-linked groups will be complete, thanks in no small part to Eric W. Treene.

Pamela Geller is the President of the American Freedom Defense Initiative (AFDI), publisher of The Geller Report and author of the bestselling book, FATWA: Hunted in America, as well as The Post-American Presidency: The Obama Administration’s War on America and Stop the Islamization of America: A Practical Guide to the Resistance. Follow her on Twitter and Facebook.

I doubt whether any American would defend the police treatment of George Floyd that led to his death. But many...