A brave Louisville restaurant owner is standing up to the Black Lives Matter organized crime  racketeering mob and has put them on blast for using “mafia tactics” in an attempt to shake down local businesses.  BLM mafia actions are illegal under the RICO prosecution laws. 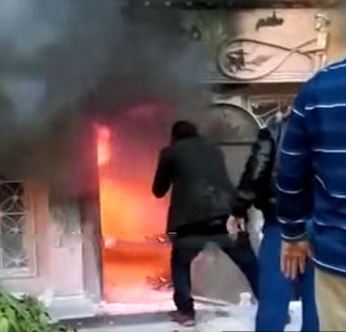 The Racketeer Influenced and Corrupt Organizations (RICO) Act is a United States federal law that provides for extended criminal penalties and a civil cause of action for acts performed as part of an ongoing criminal organization. The RICO Act focuses specifically on racketeering and allows the leaders of a syndicate to be tried for the crimes they ordered others to do or assisted them in doing

A Cuban business owner, Fernando Martinez, owner of La Bodeguita de Mima, had his business vandalized for refusing to comply with a lengthy set of demands sent to local businesses by mafia leaders within the Black Lives Matter organization.

“On Thursday, a mob of protesters returned to the restaurant after seeing Martinez’s post about the illegal demands on Facebook. While there, the protesters smashed  flower pots outside the business, while the rest spoke with Martinez and other employees about why the demands are needed,” the Courier Journal reported.

In response to his business being targeted, he organized a protest of Cuban business owners to stand against Black Lives Matter’s forcing business to comply with their demands, or destroying their businesses.

They were also told they must display a Black Lives Matter sign in their window, or the business would be fire bombed.

They vandalized a business that refusedhttps://t.co/lj6gBOR5U1

The Black Lives Matter “activists” also listed a series of repercussions that businesses should expect if they refuse to comply with their demands, and told Martinez that noncompliance would risk “having their store fronts ‘f****d with.”

Other listed threats of retaliation for refusing to bow to the mafia tactics included a boycott, social media shaming, and an “invasive reclamation” whereby black-owned businesses with competing goods of services would set up “booths and tables” outside. On Sunday, Martinez held a Cuban-led protest against Black Lives Matter. During the protest, one of the speakers asserted that “the reason we are here is because the system, because socialism doesn’t work. It doesn’t work.”

At La Bodeguita De Mima on E. Market St, where members of Louisville’s Cuban community are gathering to show support for owner Fernando Martinez. He said he was threatened by BLM protesters, who sent letters to business owners in NuLu demanding to improve diversity in the area. pic.twitter.com/sFJR5c0KNM

Martinez said that because of the threats he had to close his business for two days, causing the paychecks of roughly 30 employees to suffer.

According to a report from the Daily Mail, some of the business owners in the area have been forced to comply with the demands of the BLM mafia.

Trump has put out an ad in response to the violent socialism happening to Americans.

Joe Biden has promised to be "the most progressive" president in American history.

In Case You Missed It:  CAUGHT: Republican Primary Challenger To Matt Gaetz Is in Cahoots With Never-Trump Lincoln Project
Posted in Tyranny and tagged Black Privilege, BLM, Crime.

China Is Trying to Steal Data From US Government and You

A cybersecurity battle is raging. In recent weeks, Chinese hackers stole, or attempted to steal, terabytes of data from the...