If the Democrats’ pull off Election 2020 as their final coup d’etat, everything old becomes new again sometime after November 3 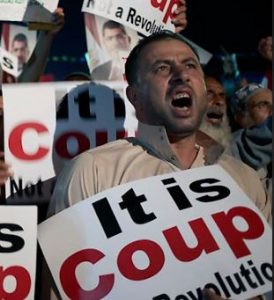 More than anything else, Election 2020 is the final coup d’etat in ‘The defamed and dramatized Russians-Stole-the-Election Series’;  the still alive and kicking Big Lie of the Democrats and the Media.

When November 3 comes to pass,  it will be plain to see that there was no such thing as Election 2020—because Election 2020 is, in surrealistic Democrat reality, Election 2016 Re-scheduled.

From the very moment Hillary Clinton Campaign Chairman John Podesta made his late-night concession that Donald Trump won the election, after the media’s top journos openly wailed and sobbed over their loss,  the Democrats began hitting the phones to kick off their 2020 campaign.

They were to have four years to mount their campaign through self-appointed “Resistance” leader Barack Obama.

In ensuing months, they laid out as many diversions as their imaginations could come up with: RussiaGate, Adam Schiff’s tried and failed Congressional Trump Impeachment, etc., etc., etc.

Meanwhile, who was paying attention to what the Barack Obama-led Democrats were really up to: erasing the results of Election 2016—as if it never happened, and more significantly working to return Hillary Clinton to power they claim was always hers.

Defiant Democrats, in effect,  slammed the door on reality, forcing their unhinged reality on the entire nation.

Sometime next week, presumptive Democrat presidential nominee Joe Biden—who says he will give his acceptance speech from the basement of his Delaware home campaign hideout—will let the public in on who his vice president choice will be.

It won’t really matter who she is because it can be taken as guaranteed that she will be under the control of Barack Obama.

Biden running his election from home, purportedly to avoid coming down with Covid-19, fits the electorate like the proverbial glove.  Democrats have decreed that the only way not to catch the virus on Election Day is staying home and casting their ballots by a universal Mail-In Vote.

Here’s how savvy Brian C. Joondepth, M.D. threw light on what the Dems are up to on American Thinker

“The compassionate Democrats say it’s too dangerous to wait in line to vote.  Yet it was fine for hundreds to wait in line for John Lewis’s funeral procession.  Hypocrisy is on full display when it comes to the Chinese coronavirus. (American Thinker, Aug 4,, 2020)

“The all-knowing, all-caring Dr. Anthony Fauci donned a large mask while standing all alone on the pitcher’s mound waiting to launch his ill fated pitch closer to the dugout than home plate.  Yet in the bleachers, he was yukking it up with some pals, forgetting all about masks and social distancing.

“Aside from mail-in ballots being ripe for cheating, there are other more subtle forces at play here.  CBS did its own vote-by-mail experiment and, surprisingly, at least to CBS, discovered “potential problems” such as that “3 percent of voters were effectively disenfranchised.”  That could be enough to tip a close election.

“Is the Democrat-media push for mail-in ballots simply so they can cheat and steal the election from President Trump?  Perhaps, but suppose Trump is headed for a landslide victory, as some of us have suggested.  Even cheating may not be enough to drag Dementia Joe across the finish line.”

Stories that Biden is showing a lack of cognitive skills run rampant on the Internet.

Yet no Democrat has commented on it.

Could that be because Democrats see Biden’s could-be dementia as convenient?

“Über-left Harvard law professor Lawrence Tribe let the cat out of the bag with this tweet.

Under the 20th Amendment, the president’s term ends Jan. 20 at noon. If a president & vice president haven’t been chosen by then, the Speaker of the House becomes president. Treating the Nov.3 election as meaningless would make @SpeakerPelosi president.

The U.S. Postal Service is considering closing post offices across the country, sparking concerns ahead of an anticipated surge of mail-in ballots in the 2020 elections

“The Democrats don’t have to cheat in the casting of ballots.  They simply don’t have to count the ballots at all.  It’s quite clever, and Professor Tribe, along with the U.S. Postal Service, provided the roadmap.

“It will be a repeat of Al Gore’s hanging chad story, with lawsuits and Soros-funded state and county officials unwilling to certify any election results.  Democrats have been preparing for this scenario.

“There will be mass chaos and confusion.  The virus will be long forgotten, and the new narrative will be that there is no way to declare a winner as too many ballots were lost and unable to be counted.

“Amid the chaos, enough states won’t be able to certify their electoral votes, and neither candidate will have a majority.  Voilà: it will be up to Congress to decide, the Democrat-controlled House choosing a president and the Senate choosing the irrelevant vice president.

“And not necessarily House Speaker Nancy Pelosi, as she is only a half-step behind Dementia Joe in age and cognition.  How about Hillary Clinton?  Michelle Obama?  Mayor Pete?  Take your pick.  Mitt Romney for V.P.?  How about Susan Collins?  Bipartisan in name only.

“It is certainly clever and now obvious how the Democrats plan to steal the election and install a president of their choosing, without the messiness of an actual campaign and election.”

If the Democrats’ pull off Election 2020 as their final coup d’etat, everything old becomes new again sometime after November 3.

But the New Again’s not so new because it will be the same old, same old: Barack Obama and Hillary Clinton running the Good Ship USA to certain ruin.

In Case You Missed It:  The most epic and dangerous economic STORM in history is now upon us
Posted in Freedoms and tagged coup, Democrats, Election, Obamagate.

By Monica Showalter Is there anything Democrats like to scold more on than the need to "be like Europe"? That's certainly...