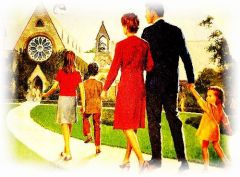 In your interview with EWTN anchor Tracy Sabol, you lamented the injustice that protesters may crowd the streets and malls with no COVID-19 restrictions while churches are forced to shut down. Clearly you see that the radical-left is using COVID-19 as a political tool to lock down on religion, so why can’t an executive order be issued that would make Americans immune to state orders to close the churches? With discrimination cited as your grounds, you’d put the enemy to shame.

On May 22, you declared that churches are “essential places” that should be opened “right away” and said you would “override” any governors who stood in the way of your plan to reopen the churches, so why not override them now via executive order? The fake upping of COVID-19 cases in June was nothing more than a deep-state scheme to close the church again so we ask that you not take these fraudulent figures seriously. The number of new COVID-19 cases is virtually nil, at least according to doctors who tell the truth.

It behooves you to take action, because as Archbishop Vigano pointed out to you in his open letter, we are witnessing the latter-day war between Lucifer and the children of God — a war in which the troops need to be nourished — and just when added grace was needed to keep patriots above water the holy cisterns were strategically cut off by these political pharaohs in the governor seats. The enemy has craftily played its cards in gaining the advantage over America, so play your cards against them by forbidding the state closure of churches. This not only would place America back on its feet but would give you the winning edge in November.

It’s like a farm you want to grow. You have a lot of good things sprouting up, like enhanced economy, stopping abortion, guarding our borders, and bolstering our military and police. Skill and industry will certainly play a part in bringing a good harvest but what is really needed now is holy irrigation, which would quickly be restored upon reopening the churches.

Because one thing is for certain: without replenishing America through the reopening of churches, your farm will dry up to the glee of deep-state socialists who have planned this drought from the beginning. The closing of churches over COVID-19 has been a key part of the enemy plan to cripple America and empower the global elite, evidenced now with the sudden wave of civil violence that has spread across our land. There is no denying the direct correlation between the closing of churches and the outbreak of violence, so let’s open the churches to squelch the flame and irrigate your plans for a bumper harvest in the coming year!

The “dumbing down” of America’s education has been accomplished in less than five decades By Dr. Ileana Johnson Paugh When I...