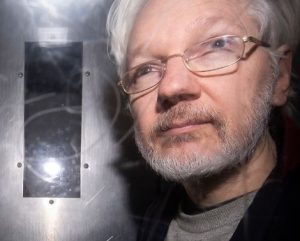 Democrats who start screaming “Russia, Russia, Russia!” whenever WikiLeaks releases something they’d prefer not hear need to wipe the foam from their mouths and have a look at that report Robert Mueller issued.

Because it doesn’t say what they think it does.

For starters, while Mueller does try to make us believe that Russian agents passed documents to WikiLeaks, at no point does he suggest that Julian Assange or anyone else from his organization had any inkling they were dealing with any spies, Russian or otherwise.

Even if everything Mueller says is true – which you’ll soon realize is about as likely as Joe Biden winning a Nobel Prize for developing a theory of quantum gravity and then showing up to the awards ceremony wearing pants – there’s no reason whatsoever to believe that WikiLeaks did anything different than what the New York Times, Washington Post, or CNN regularly does when they publish anonymously sourced material.

Well, nothing besides the fact that WikiLeaks’ documents were authentic, at any rate.

Indeed, we know for a fact that Gawker and The Smoking Gun both published documents they obtained from the very same alleged Russian spy that Mueller merely claims sent a single file to WikiLeaks.

No one denies it.

Nor has anyone suggested that either outlet is a front for Russian intelligence.

The only evidence Mueller presents that Assange got any files at all from Russia involves an anonymous blogger using the nom de guerre, ‘Guccifer 2.0.’

G2, as he’s frequently called, appeared online out of nowhere on June 15, 2016, making a huge public show by sending Gawker and the Smoking Gun some documents he claimed he’d hacked from the DNC and posting them on his newly-minted blog.

According to Mueller, G2 was a fake identity created by a group of Russian intelligence officers trying to pass themselves off as an arrogant and attention-hungry, lone-wolf Romanian hacker.

Mueller gives us around a half dozen mostly heavily expurgated quotes allegedly from online messages between G2 and WikiLeaks. He claims that G2 attached an encrypted file to one message and sent the key necessary to decode it along with another.

And that’s it. That’s literally the only evidence Mueller cites that WikiLeaks got any files from Russia.

Though he’s careful not to actually say so.

Luckily for Mueller, the Russian spies running the G2 identity made the innuendo he was aiming for a whole lot easier. They conveniently labeled their encryption key “wk dnc link1.txt.gpg.”

So you don’t even need the file it encrypts to make a pretty good guess at its content and even whom it’s for.

Those wacky Russians spies somehow chose a file name that basically gives their whole game away to anyone who manages to get ahold of their encryption key. In fact, all you’ve got to do is read a message it’s attached to.

As we’ll see, this is by no means the only time Putin’s minions acted in ways that made Mueller’s job a whole lot easier. In fact, in several cases, the helping hand they lent was so useful that Mueller kept any mention of it out of his report.

But, returning to the question of whether Assange believed he was dealing with Russian agents, nothing about any of the communications that Mueller provides even remotely suggests that he or anyone else from his organization was even slightly suspicious.

In fact, Mueller claims that WikiLeaks initiated contact with G2 one week after Gawker and the Smoking Gun had already published his stuff via a direct message over Twitter that said:

Send any new material here for us to review and it will have a much higher impact than what you are doing.

Apart from sounding like Assange didn’t know anything more about G2 than anyone else, Mueller claims that conveniently named file G2 sent that constitutes the only evidence that WikiLeaks got any files from Russia at all was sent via Twitter DM as well.

But it would be tough to suggest anything more preposterous than that Julian Assange would communicate with and receive files from a coconspirator he believed to be a Russian intelligence agent using Twitter direct messaging, since:

Even a genius like Assange would have trouble intentionally devising a stupider idea than using a verified social media account to communicate with agents of Vladimir Putin with whom he was engaged in a conspiracy against the United States government, let alone using it for receiving files from them.

But, as you might have suspected from Mueller’s bizarre assertion that Russian spies on a mission from Vladimir Putin to control the outcome of the United States presidential election were using Twitter to conduct their most important and risky communications and even went so far as to helpfully include a reference to WikiLeaks and the organization they’d hacked in the name of a file they sent, virtually nothing Mueller says is true.

Not only is he withholding vital information in the public record which renders his allegation that G2 was a Russian spy preposterous. Facts he himself admits about WikiLeaks DNC emails also make it impossible that they could have been contained in that file he claims G2 sent just 8 days before WikiLeaks began publishing them.

In Case You Missed It:  China Lies About Its Wrongdoing on COVID, Spying, Global Aggression, Pollution, and More
Posted in Freedoms.

Now following crazy conspiracy theories isn’t an exclusive purview of the left. But with media and Democrats pushing the Russia...