by Jonathan Spyer
The Times of Israel
September 20, 2020

In early March, 2020, when international travel was still unambiguously possible, I was due to visit the United States on an Israeli passport. I had been invited to speak at the annual AIPAC policy conference. In addition, a number of other meetings were in the initial process of being scheduled. These included a talk at a base of the US Army Special Forces, and another engagement in New York. 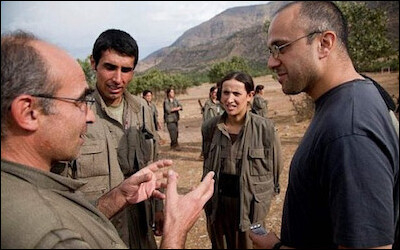 Jonathan Spyer (right) in the Qandil Mountains of Iraqi Kurdistan on March 31, 2011.

I had a number of logistical issues to sort out in making preparations for the trip. One of these was that I had received a phone call one Friday morning a couple of months earlier from someone speaking accentless Hebrew but claiming to be from the US Embassy in Jerusalem. This individual briskly informed me that my existing, ten-year visa to the US had been cancelled. I inquired as to the reasons for the cancellation. He informed me that the embassy was not required to provide an explanation for decisions of this type. There our conversation ended.

I assumed some bureaucratic hiccup. I had been travelling regularly to the US since 2004, without experiencing any problems. Indeed, I was fond of telling friends about some of my experiences entering the country. These seemed to me to epitomize the positive and unique side of a country of which I had grown very fond. On one occasion, an Italian-American passport control officer, seeing my Israeli passport, asked if I had taken part in the 2006 war in Lebanon. I replied that I indeed had. He responded that he had been stationed with US forces in Iraq at that time. We looked at each other for a moment and he nodded slowly and said “welcome to the USA.” Another time, a Korean American officer began speaking to me slowly in Hebrew after I handed him my passport. Astonished, I asked him where this knowledge came from. “Our pastor encourages us to learn some Hebrew before visiting Israel,” he replied.

I have never had such experiences entering any other country. These anecdotes seemed and seem to me to get at the heart of the particular relationship between the USA and Israel, the country of my residence and citizenship.

So I expected that a renewed visa application would rapidly sort out whatever issue had arisen. I duly filled out such an application, and went on the designated day to the consular offices in Jerusalem. There, I waited in line and when my turn came, the polite young consular officer handed me a pink piece of paper, saying, “No visa for you today, sir.”

I waited til I got out of the building before looking at the paper. On doing so, I learned that “You have been found ineligible for a non-immigrant visa under the following section(s) of the US Immigration and Nationality Act.” A series of possible options for the ineligibility followed. The one with the pen-mark next to the square in my case was “Section 212 (a) (3) (b), which prohibits issuance of a visa to a person who at any time engaged in terrorist activities or was associated with a terrorist organization. (sic). This is a permanent ineligibility.”

I had to go straight from the consulate to some work arrangements that day, which prevented me from properly considering the matter until later. In the evening, back home in Jerusalem, I tried to work out what might have led to this. I have never been convicted or charged of any acts of terror. Indeed, I have no criminal convictions of any kind, (barring a conviction for a minor public order offence resulting from my involvement in activities as a very young man against Neo-Nazi organizations in London in the 1980s).

My work as a journalist and Middle East analyst has in recent years brought me into the company of members and operatives of various organizations designated as terror groups by a number of countries. These contacts have taken place, however, in the regular course of work as a reporter. In no case were my contacts with these organizations indicative of any sympathy of any kind on my part with their aims and goals. Among the organizations in question are Lebanese Hezbollah, Islamic State, Hamas, Kta’ib Hezbollah, the Badr Organization and a few others.

There is a single exception in my case to this normal and unremarkable pattern in which a journalist or researcher maintains contacts with individuals from organizations of public note for the purpose of information gathering.

The single, partial exception is the Kurdish PKK, or Kurdish Workers Party. Those who are familiar with my writing will be aware that I am a supporter of the Kurdish cause, and regard the struggle of the PKK organization against the Turkish regime to belong to the class of justified insurgencies. This does not mean that I think this organization should be above criticism. Indeed, many of its tactics, especially in the earlier phase of its campaign, deserve I think to be strongly criticized. But I believe the Kurdish national cause to be one of the most unambiguously justified political endeavors currently in existence anywhere in the world. I regard the PKK to be one of a number of organizations in different parts of Kurdistan seeking to advance this cause.

In this regard, it is my view that this organization deserves to be removed from the list of terror organizations maintained by both the US and the European Union, on which it is currently included. My convictions in this regard are strengthened by the nature of the current Turkish regime, which is anti-Semitic and anti-Western in its political outlook, and brutal and repressive in its behavior. They are also strengthened by my personal witnessing of the actions of the Kurdish YPG organization in northeast Syria in 2014. On that occasion, the swift response and determined efforts of the YPG against Islamic State forces were instrumental in preventing the genocide of a defenseless population.

None of this, of course, means that I was either engaged in activities on behalf of, or in a serious way “associated” with this organization. It only means that my general sympathies with the Kurdish cause are the only possible explanation I can find for the decision to ban me, apparently permanently and without right of appeal, from the USA. My suspicions are that the decision is the result of the activities at some level of agencies of the Turkish government. The current Turkish regime’s harassment of its critics and of the journalistic profession in general are well documented. Its historic alliance with the US, now largely a matter of form rather than content, presumably affords it an attentive ear among those organs of the American state where such decisions are made.

Of course, this must of necessity remain only a theory. It is an odd sort of situation in which to find oneself. No charges are being issued, so one has no ability to address them. The decision has been taken. There is, apparently, nothing further to be discussed. Needless to say, neither the US Army Special Forces nor the attendees at the AIPAC policy conference ended up hearing what I had to say, in March, as we all sailed towards the pandemic. No doubt these august organizations will continue to flourish in the absence of my counsel. I do however find a certain irony in the fact that both these invitations derived presumably from the notion that my professional activities might enable me to contribute, in no matter how modest a way, to the discussion concerning US national security.

Non-citizens do not have the guaranteed right to enter any particular country. Nevertheless, a system in which one can be tried, convicted and sentenced with no chance to consider the evidence or put one’s own account forward strikes me as something less than fair. That such a system appears now to be preventing me from ever again visiting a country with which I feel a strong bond, and to which I am connected by familial links and many strong friendships, is a matter of some personal sadness.

Efforts to resolve this issue through private channels in recent months have proved fruitless. I have no particular expectation that making the matter public will produce results either. I simply wish to add my name to the list of individuals affected in recent years by decisions of this kind, in the hope that some general review of the process by which such decisions are reached might be initiated. In this regard, I would suggest in particular special attention be paid to the set of ideas, convictions and practices which currently characterize Turkish policy. The latter is not today a pro-US or pro-Western state in any but the most nominal terms. As such, its attitudes and practices toward those it perceives to be its enemies should not be assumed to be in line with the norms favored by the US or prevalent among western and NATO member countries.

This article is an excerpt from the “2020 Mandate for Leadership: A Clear Vision for the Next Administration.” It looks...