It was the first time that Biden and Harris were at an event together since the DNC, so you would have thought this was going to be a big deal… 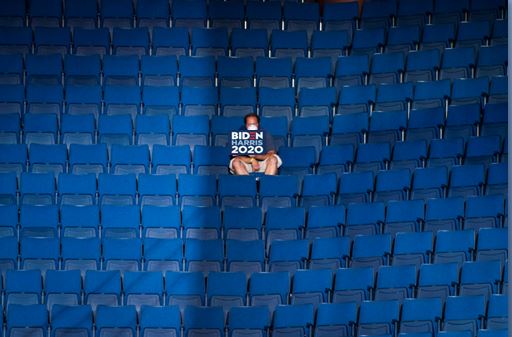 Yet not a single supporter showed it, simply all there was was am empty room with only the media present.

With the presidential election just weeks away, a strong voter turnout could likely be the deciding factor between President Donald Trump and Democrat challenger Joe Biden.

This Now News television news reporter covering Biden’s failed Arizona rally with his running mate Kamala Harris seemed mystified by the absence of any Biden supporters. Her is the reporter outside the Heard Museum in Phoenix where the former Vice President was appearing in person, the hotel was a ghost town.

Biden/Harris hold campaign event in Arizona and the news station is shocked no supporters showed up ??? pic.twitter.com/u54tD41oq8

“Our state has established itself as a battleground state and so this is technically a big event, but not anything of a fanfare.”

“This should be a huge event politically, but you can’t tell that by the outside of the Heard Museum. There’s really nothing going on here. …”

This is Hilarious ?!!! At the Debate, Trump told Biden nobody wants to see him! Here’s a Trump Rally, I believe a local, grassroots event: https://t.co/HHUwOXFGU0

In Case You Missed It:  Bidenomics: US To Totally Collapse after Dollar Collapses
Posted in Financial and tagged Election, Usurper Joe Biden.

A Look Back at Trump’s Health Care Reforms

This article is an excerpt from the “2020 Mandate for Leadership: A Clear Vision for the Next Administration.” It looks...