Donald Trump Jr. has just raised an interesting question in a tweet: Is Twitter censoring the Hunter Biden stories from the NY Post at the behest of the Communist Party of China?

“There needs to be an immediate government investigation into @twitter/@jack. Not just because of their blatant election interference to protect Biden, but to find out if they’re censoring these NY Post stories at the behest of the Chinese Communist Party. Put Jack under oath!!!” Don Jr. tweeted.

There needs to be an immediate government investigation into @twitter/@jack.

Not just because of their blatant election interference to protect Biden, but to find out if they're censoring these NY Post stories at the behest of the Chinese Communist Party.

We imagine this tweet will be suppressed momentarily, if it hasn’t already.

Update (1000ET): While Twitter suppresses this latest Hunter Biden expose, it’s trending topics section is allowing #EricTrumpsUkraineScandal in one of the top spots. The story is essentially a collection of previously reported comments that even the NYT has now acknowledged isn’t accurate.

Rudy Giuliani hinted last night that there would be more emails from the trove discovered by a Delaware computer repair shop owner (who has shared his story on the record with Fox News). And at 0500ET, the NYPost published another lengthy exposé – at least the second front-page piece in what is shaping up to be a fascinating series – citing never-before-seen emails between Hunter Biden and various individuals connected to a major Chinese energy firm that failed earlier this year after its chairman – a party insider with deep ties to China’s military – was “disappeared” by China’s state security apparatus.

The first of three email chains explored in the story was sent to biden by a man named Jams Gillar, of the international consulting firm J2cR. The email chain discusses what appears to be a generous compensation package for Hunter Biden, along with other individuals whom the Post was apparently unable to identify (though it’s tempting to hazard a guess).

A subject line on the email, dated May 13, 2017 read “Expectations”, and it included details of “remuneration packages” for six individuals involved in the new business venture (the nature of the business wasn’t clear, though it appears to be related to Biden’s international consulting business). However, Biden’s partner in the business appears to be CEFC China Energy, the now-defunct energy firm mentioned above. 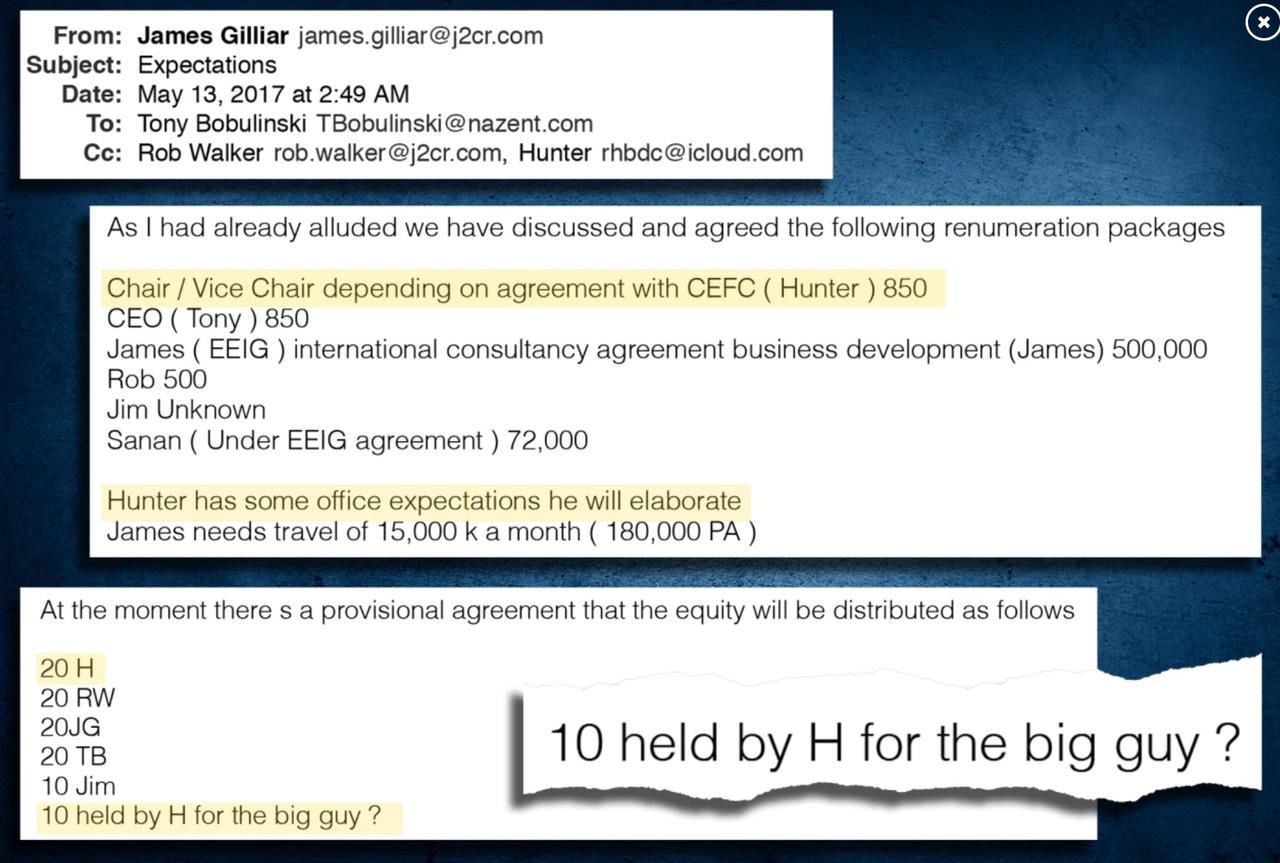 The deal also listed “10 Jim” and “10 held by H for the big guy?” Though neither was positively identified.

In another email, sent by Biden as part of a chain dated Aug. 2, 2017, Biden discusses what appears to be a joint venture – a deal structure common in China, where foreign competitors must build partnerships with domestic firms – involving the former Chairman of CEFC, Ye Jianming. Half the ownership was to be held by Hunter and the Biden family.

Ye disappeared in early 2018 and is believed to have had deep connections to China’s intelligence and security services. Though at one point, Biden wrote that Ye had sweetened the terms of an earlier, three-year consulting contract with CEFC that was to pay him $10 million annually “for introductions alone.”

Here’s the excerpt from the NY Post story, accompanied by visual snippets culled directly from the emails, in which Biden asserts that the reason this joint venture is “so much more interesting to me and my family is that we would also be partners in the equity and profits.”

The nature of this ‘venture’ wasn’t made clear.

Biden wrote that Ye had sweetened the terms of an earlier, three-year consulting contract with CEFC that was to pay him $10 million annually “for introductions alone.”

“The chairman changed that deal after we me[t] in MIAMI TO A MUCH MORE LASTING AND LUCRATIVE ARRANGEMENT to create a holding company 50% percent [sic] owned by ME and 50% owned by him,” Biden wrote.

“Consulting fees is one piece of our income stream but the reason this proposal by the chairman was so much more interesting to me and my family is that we would also be partners inn [sic] the equity and profits of the JV’s [joint venture’s] investments.” 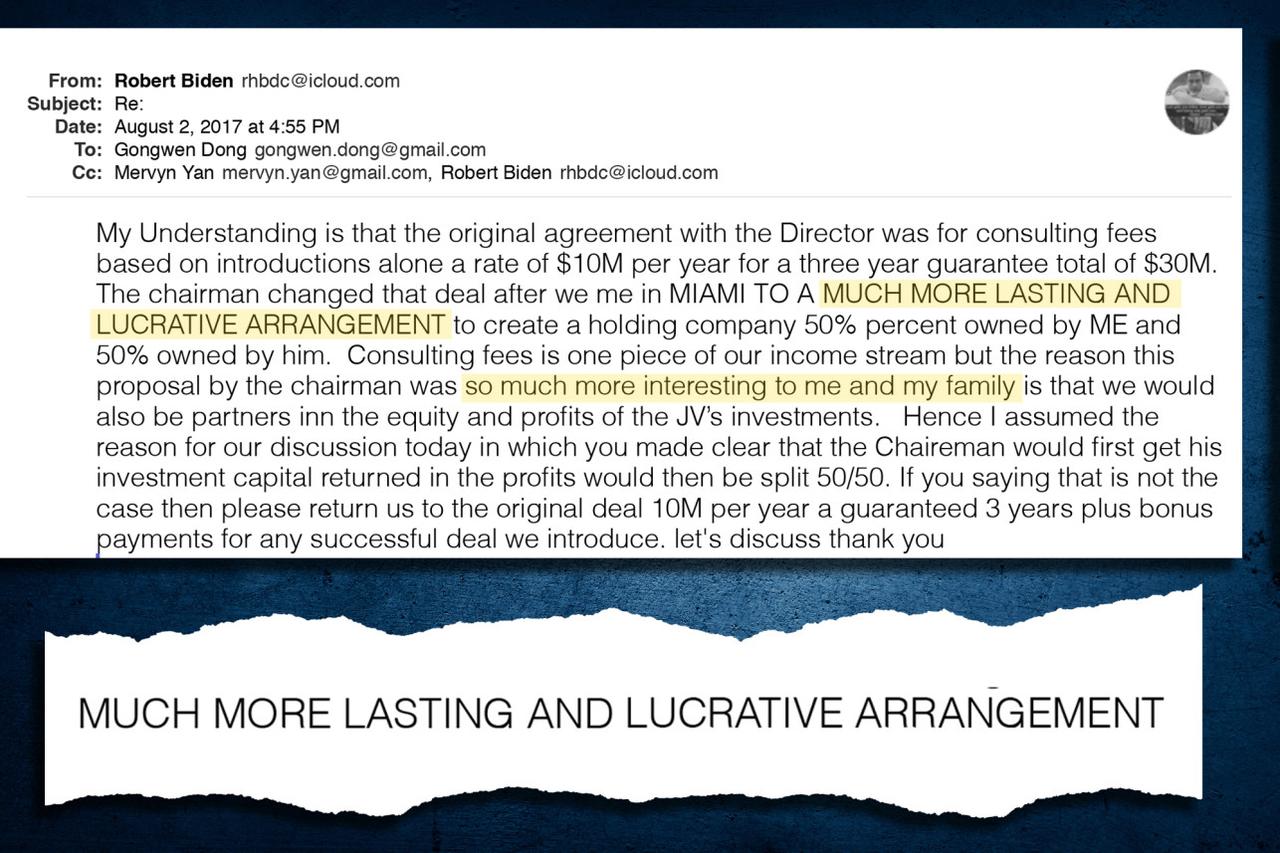 What’s more, a photo published by the Post and dated Aug. 1, 2017 shows what appears to be a handwritten flowchart illustrating the ownership structure of “Hudson West”, split 50/50 between two entities ultimately controlled by Hunter Biden and someone else identified only as “Chairman.” 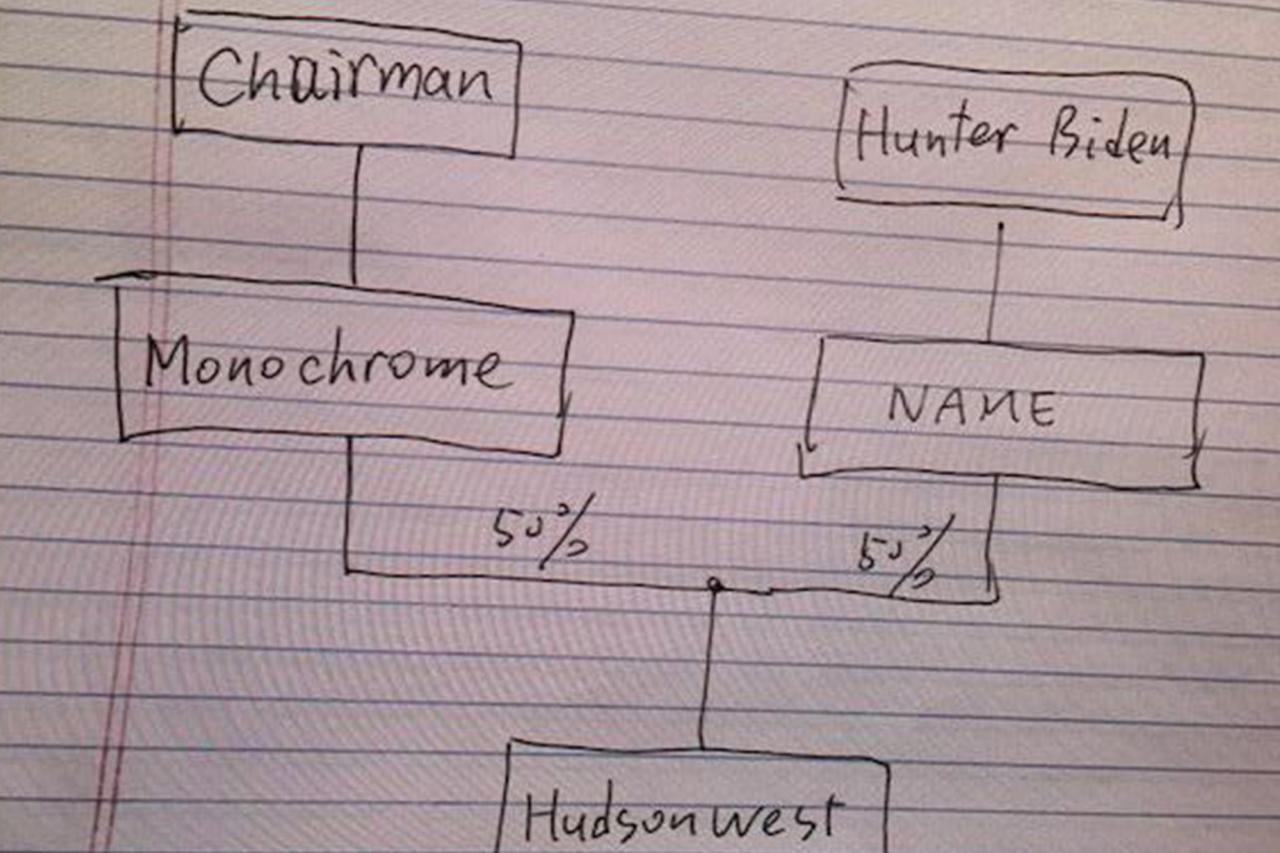 We know from the Senate report released last month that ‘Hudson West III’ was used as a name for one of Hunter Biden’s shell companies formed with Gongwen Dong. To be sure, some details about Biden’s Chinese consulting practice has already been made public, but details of the dealmaking and discussions that went on behind the scenes have not.

Finally, the last in the triptych of distressing email chains is aa copy of an “attorney engagement letter” between Hunter Biden and one of Ye’s top lieutenants, Hong Kong official Chi Ping Patrick Ho.

He agreed to pay Biden a $1 million retainer for “counsel to matters related to US law and advice pertaining ot the hiring and legal analysis of any US Law Firm or Lawyer.”

Later, in December 2018, a Manhattan federal jury convicted Ho for being involved in two schemes to pay $3 million in bribes to high-ranking government officials to help obtain oil rights in Chad and lucrative business deals in Uganda. 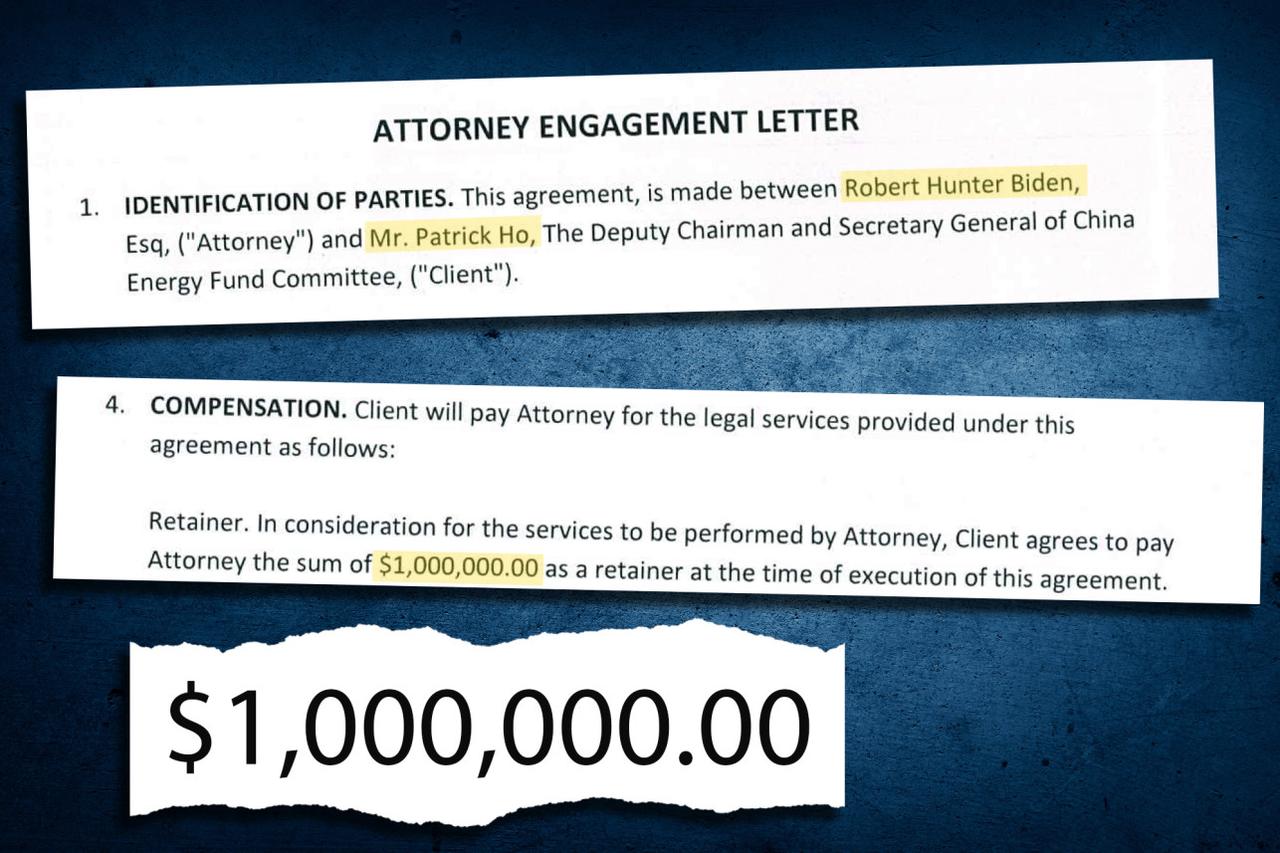 Ho has served his sentence and was deported to Hong Kong in June.

Neither the Biden Campaign, lawyers for Hunter Biden, Gillar, Dong nor Ho returned requests for comment from the NY Post.

After yesterday’s catastrophe, we look forward to watching Facebook and Twitter scramble to suppress this story as well. We’re beginning to see why the Post has decided to publicize details from the trove piecemeal, instead of writing a 10,000-word NYT-style novel about Hunter Biden’s transgressions.

The NY Post also published a handful of new candidate selfies apparently taken by Hunter Biden along with the story.

It’s a suitable tactic for what some conservatives are calling a “digital civil war” over information that could influence the election in President Trump’s favor.

The FBI Seized the Hunter Biden Computer in December 2019 – Ignored the Crimes, Did Nothing and Gave the Biden Family a Complete Pass

After years of leadership from the likes of Robert Mueller, James Comey and Christopher Wray, the FBI’s name is severely...