What happened through Tuesday night was a carefully choreographed insurgency, involving not just the DNC but also the world’s legacy media and Big Tech. I watched it from the early hours, Irish time, from the closing of the first polls in Indiana and Kentucky. I tuned into Bannon on YouTube, occasionally dipping into Steve Turley for his always cogent and uplifting intermittent posts. I do not engage with legacy media, for the reasons already mentioned.

From about 1am Irish time, it was clear that Donald Trump was running away with it.  He had virtually everywhere improved on his 2016 performance, massively increasing his share of the Black (up 50%) and Latino votes and losing only the odd handful of elitist whites and baby boomers.  Once again, his results left the information warfare opinion pollsters bleeding by the wayside.

The pattern we had been alerted to expect was that Biden would start off strong, because of the preponderance of Democrats among postal voters, but then Trump would surge as the votes-on-game-day were counted.  That’s exactly what happened. For about three solid hours, Trump was soaking everything up. Then, completely against the run of play, Joe Biden emerged at 12.40am in Delaware to claim the election while claiming he wasn’t. ‘It ain’t over until every ballot is counted, but we feel good about where we are,’ he said, his wife by his side clapping maniacally. Historians will in time replay ad nauseam that brief speech, read from autocue, sounding and looking like it had the word ‘(smile)’ inserted into each break between paragraphs. ‘It’s not my place or Donald Trump’s place to declare who’s won this election,’ Biden said. ‘That’s the decision of the American people.’ But, at that moment, anyone watching the numbers would have expected Biden to be conceding. 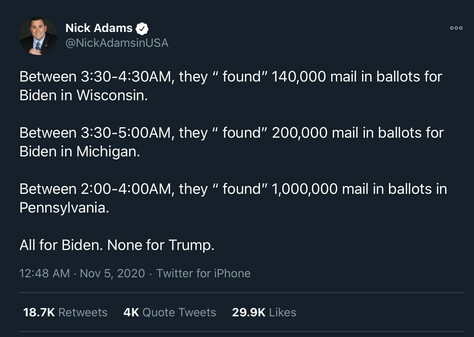 From then, the results seemed to dry up. Several clearly imminent Trump victories were left undeclared, while media reports attributed bizarrely improbable wins to Biden. Even Fox News got in on the act, claiming that Arizona, looking like neck-and-neck, would fall to Sleepy Joe. The reason was obvious: the media did not want Trump to achieve the psychological boost of going into the lead in the Electoral College, though they appeared to take some joy in announcing that the (meaningless) popular vote baton had passed from Trump to Biden. Gradually, the counts adjourned for the night, including some that were within an hour of a final result. Then, in the small hours, 138,000 votes, allegedly lost-but-now-found postal ballots, turned up in Wisconsin, 96% of them made out to Joe Boden. The final assault on Western civilization had begun.

It is crucial to focus on all this with a view to comprehending the sheer barefaced nature of what is happening. As with the Covid scam, it is happening in full view, so that it barely seems credible that anything untoward is happening at all. This is what happens when there is total  — or all but total — control of the means of communication, creating conditions in which the levels of cognitive dissonance among observers are prone to disable their incredulity on the basis that, if something deviant were happening, it would surely be concealed behind some kind of subterfuge or cover. 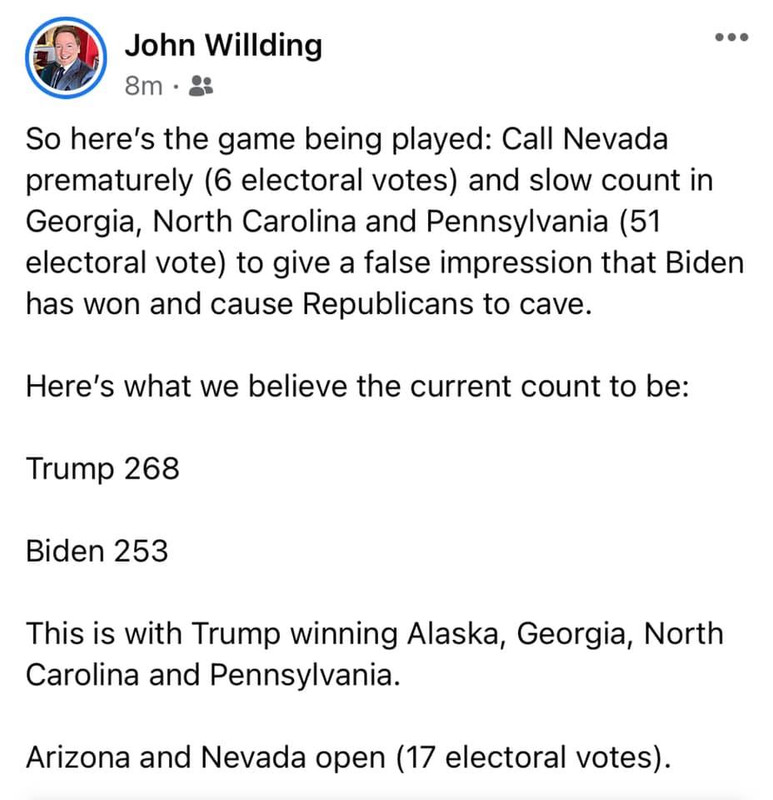 What is happening is not just an American concern. The interconnections between America and other Western countries are now so profound and manifold that what happens in the US is inevitably a harbinger for what will soon happen everywhere else. It has been clear for some time that the self-ordained royalty of Silicon Valley have decided that democracy, although a nice-sounding idea to be maintained upright by lip-service, is a cumbersome and outmoded means of organising the affairs of societies in which they have an monied interest. What? — that people of limited intelligence should be allowed to sit around discussing what should happen, how things will unfold? The growing sense among such people that democracy used to seem a fine idea at a time when it was as yet impossible to achieve a functional oligarchy without bloodying the walls in a most unseemly fashion. But now, the power of the internet has given these players the equivalent of a cultural neutron bomb, capable of immobilising the human quotient of Western society without damaging concrete assets. The Democratic Party — which has a single objective in the world: to achieve and hold power — has suggested itself as the transitional political instrument of this shift. The legacy media, grateful for another year of relevant existence, is only too happy to be part of the assault team. Thus, the world as we have known it shudders to a stop.

And the world in its foolish slumber thinks the assassin’s target is Trump, the evil racist Great Global Bastard with the bad hair and potty mouth. But the target is not Trump. He is but the self-appointed human shield who has thrown himself between the assassins and his mark. He is the gunslinger who, riding cross-mountain, heard the commotion and came to see if he could help.

The true target is you and you and you and me, the formerly Sovereign people of the Free World. The target is the kind of people who go around the place saying — if they converse with one another at all in this growing climate of low-grade terror — what a terrible man that Trump fellow is. They are the kind of people who are too busy, too arrogant, too distracted or too dumb to pay attention to the dissonance in their own hearts, who will not forbear to excoriate Orange Man even while those who attackTrump with the blasphemous name of democracy on their lips move in to steal the ground from under the feet of those who mouth with apparent relish their proffered platitudes.

(UPDATE: Mistake Points to Data Error) Very Odd: Michigan Found Over 100,000 Ballots and Every Single One Has Joe Biden's Name on It https://t.co/JCHExjOlHA

Our gunslinger saviour is now all but mortally wounded. The townspeople, confused and torn by distraction and lies, do not know who the Good Guys are. The cock crowed its warning once, four years ago; and then a second time last Easter, at the dawn of the Time of Covid. Most of us did not hear, either time. If, in time, we contrive to ignore the third cockcrow, let us not think we can simply excuse ourselves by pleading: ‘Not I’.  There is no gallery we ought to be concerned about, no one listening or watching now whom we should think worth signalling our virtue to. And, since one of the many terrible consequences of what is happening will be the eradication of history, there will in the end be no judge of our responses but ourselves and those who will grow up in a much-reduced world and learn about the Big Bad Orange Monster, from whom the world was once saved. And we shall be unable to remember why we thought that such a good idea at the time.

Though we know about many 'Unverifiable dumps of votes everywhere'

?The picture below can become the strong court evidence

VIDEO: Rudy Giuliani Says Major LAWSUITS Will Be Happening; Fraud All Over The Country

Rudy Giuliani reports the widespread fraud perpetrated by the crooked Democrat machine and that lawsuits will be filed in order...