Democrats, Like Deranged Cabalists Must Await a Future Final Defrocking by Justice 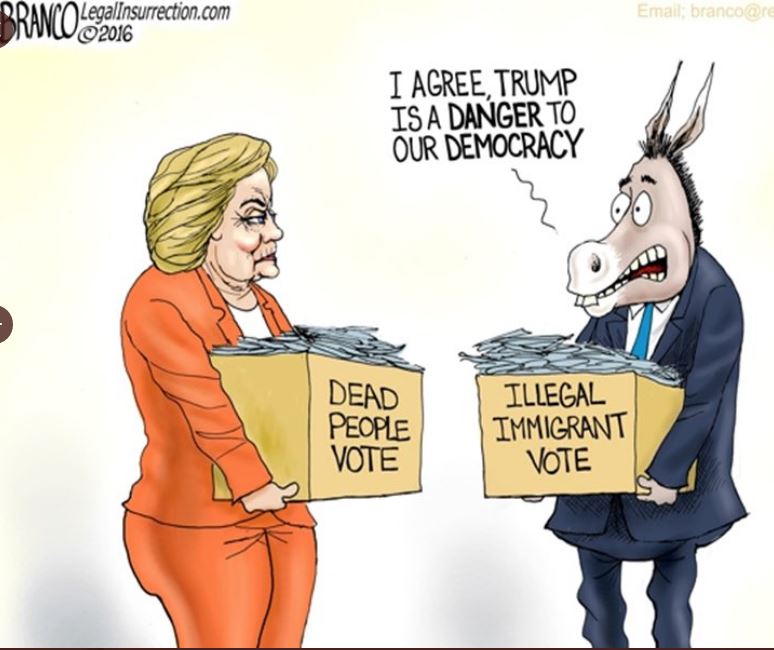 Trump Loses Lead: At the far end of the 2020 election, with Trump wrapping up the race – you maybe thought “These crazy Dems wouldn’t DARE do stupid anti-Trump tricks right out in the open!” Again, you would  be wrong. America went abed with Donald comfortably ahead. But during the night, astounding trainloads of ballots appeared from the Devil’s Workshop to blot out Trump’s victory!

Compare: Now, consider: What’s harder: Colluding with dozens of active FBI agents, a sitting President, Vice President, former Sec State, heads of the FBI and CIA, a Russian agent, and hundreds of DC bureaucrats to frame a new president? OR to take a few thousand ballots and falsify an election?

Bad Intent & Opportunity: Dems spent 4 years toiling against Trump by one cockamamie scheme after another. They certainly fantasized about stealing this election by mail-ballots. If one has the opportunity, ability, desire and motive, they did the crime. So, Dem polling spots in MI, AZ, WI, NV, inexplicably accepted massive late ballot loads. Therefore, Dems MUST have stolen the vote, because of course they did – it’s what they do!!

Collapse of US: Something terrible happened to America and we are at near terminal decline. Democrats themselves slowly morphed from government-fixated USA patriots into a secular religion brooking no opposition. Once the Dems fought for liberty: “I disagree with what you say, but will defend to the death your right to say it.” These misanthropic cabalists now seek to destroy their opponents.

Templars: Professional leftists are abusive hypocrites – feigning grand learning to obscures a fevered cranial cesspool of bias and ignorance. They regularly lie, cheat and steal for power. Like medieval Knights Templar who rescued needy travelers. But they finished as greedy heretics worshiping a dark, syncretic god, tied to satanism, Baphomet, occult and Islamic mysticism. These secretive Gnostics were arrested and ruined on Friday 13, 1307 by King Phillip, IV of France.

Barr Balks: A calculation was made by AG William Barr not to touch the radioactive cadre of DC criminals. Certainly both he and his bony lieutenant Durham were warned. They must have been informed if they continued investigations and took any more prisoners, when Trump was gone, they’d be next for prison and bankruptcy.

Left Felt Forced: Democrats left themselves no options besides a final hoax on Trump because after this election he was going to round up all the evildoers and prosecute, ruining many elites. Instead, now Biden, Harris, AOC and Pelosi get to dismiss every possible investigation. Then turn on Trump to devour his fortune and liberty in a series of falsified prosecutions. This is what lies at the foundation of the bloody war with the DC Swamp, en masse.

Sadly, we’ve witnessed the Democrats pass into darkness, overcome by greed, lust for power and sheer insanity.  Let’s keep Trump in our hearts and God as our focus.

CONCLUSION: Yet, this story isn’t finished, Trump has not lost. Apocalypse Now states:

“There’s a conflict in every human heart between the rational and the irrational, between good and evil. And good does not always triumph. Sometimes, a dark side overcomes what Lincoln called, ‘the better angels of our nature.’ Every man has got a breaking point. You and I have them. Walter Kurtz has reached his, and very obviously, he has gone insane.”

Sadly, we’ve witnessed the Democrats pass into darkness, overcome by greed, lust for power and sheer insanity.  Let’s keep Trump in our hearts and God as our focus. McCheynne wrote – “A man is what  he is upon his knees and nothing more.” Let’s implore God allows each to play the role we were called for in this moment of crisis.

In Case You Missed It:  83-Year-Old Home Depot Worker Dies After Being Violently Shoved to the Ground by Thief – Suspect Still at Large (VIDEO)
Posted in Tyranny.

For the next several years, the U.S. is going to have to make some tough decisions in areas related to...