The peace agreements between Israel and both the United Arab Emirates and Bahrain were minimized by many media outlets, in addition to influential members of the international community, since none of the countries ever directly engaged in conflict.

The same cannot be said for Sudan, which also recently announced that it would begin taking steps to normalize relations with the Jewish state. 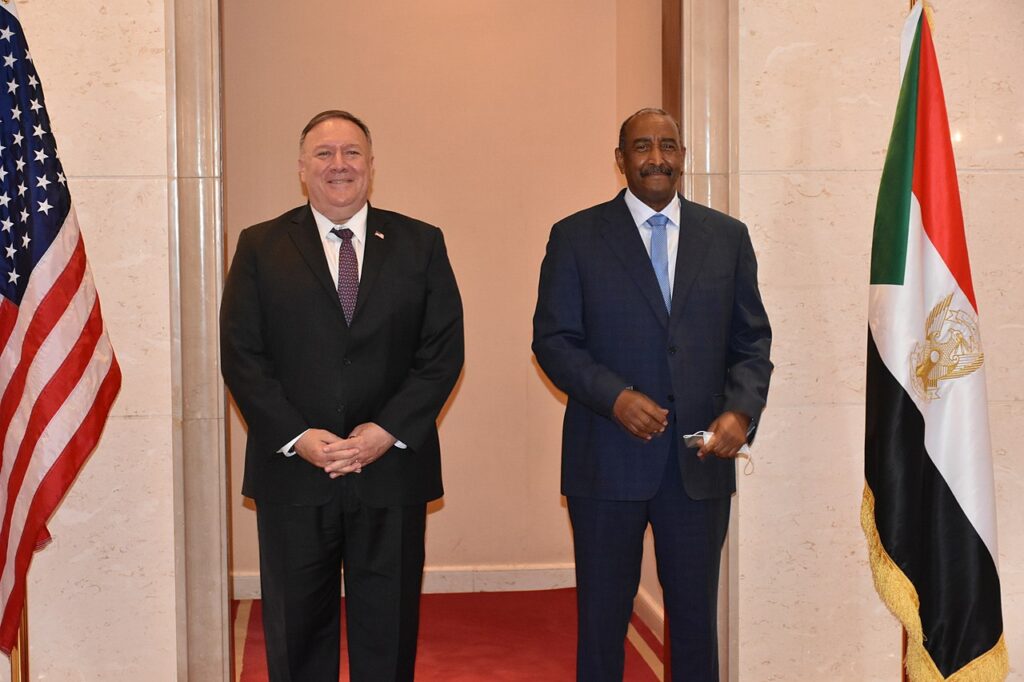 1967: No Peace, No Recognition, No Negotiations

Indeed, Sudan sent six companies of soldiers to fight alongside the Egyptian military during Israel’s War of Independence in 1948. Sudanese troops were also dispatched to fight against Israel in the 1967 Six Day War. After Israel’s victory in the latter, Sudan hosted the Khartoum Conference, which ended with the Arab League’s infamous declaration known as the “Three Noes” – no peace with Israel, no recognition of Israel, no negotiations with it. Sudan subsequently sent forces to support invading Arab armies against the Jewish state in the 1973 Yom Kippur War.

Accordingly, Israel viewed the North African nation as a threat and thus backed Christian militias in Sudan’s first two civil wars, lasting from 1955 to 1972 and then from 1983 to 2005. This did not, however, dissuade Khartoum, which continued its aggression into the 21st century by, for example, housing a Hamas command center and facilitating Iran’s smuggling of weapons into the Gaza Strip. Sudan also built a large factory near its capital city that produced long-range rockets destined for Hamas and Islamic Jihad in the coastal Palestinian enclave.

In response, Israel allegedly repeatedly targeted this facility with airstrikes between 2008 and 2014, while also reportedly striking Iranian weapons shipments docked at Port Sudan and during their transit to Gaza.

But the difficulties of forging a prospective Israeli-Sudanese peace extends beyond the countries’ historical animosity. Whereas Abu Dhabi and Manama have GDP per capitas of $68,600 and $49,000, respectively, Sudan’s is under $4,500. Moreover, large sectors of Sudan’s population do not trust the current governing Sovereignty Council — which was formed in the wake of the overthrow of longtime strongman Omar al-Bashir — and strongly oppose forging bilateral ties with Israel. The nation’s Islamic Panel of Scholars and Preachers has ruled that creating official diplomatic ties with Israel is forbidden according to Sharia law.

Despite the massive challenges, bilateral relations between Israel and Sudan started warming in 2015 when Khartoum began distancing itself from Shiite Iran and slowly entered into the orbit of the Saudi-led led Sunni axis. Then, in early 2016, Sudan followed Riyadh’s example and fully ended its dealings with Tehran.

This came after Iran’s supreme leader warned of “divine revenge” for Saudi Arabia’s execution of a Shiite cleric. Sudanese Foreign Minister Ibrahim Ghandour then, for the first time, publicly suggested that his country would be open to exploring normalization with Israel.

The prospect seemingly gained momentum just two months later when then-Sudanese president al-Bashir, historically a fierce critic of Israel’s treatment of the Palestinians, said: “Even if Israel had conquered Syria, it would not have inflicted the destruction taking place there right now, would not have killed the number of people killed so far and would not have expelled people the way they are being expelled now.”

All of this came on the backdrop of the so-called Sudan National Dialogue, a summit attended by all of the country’s political parties and factions, during which many of them expressed support for normalizing relations with Israel, especially due to the economic benefits that such a move would entail.

Under-the-radar discussions between Sudan and Israel were launched and continued into February 2020, when Prime Minister Benjamin Netanyahu met in Uganda with Abdel Fattah al-Burhan, head of Khartoum’s Sovereignty Council. The two held a two-hour tete-a-tete that resulted in a loose agreement to start forging ties.

Saeb Erekat, Secretary General of the Palestine Liberation Organization, “aggressively” condemned the move, saying that it constituted “a stab in the back of the Palestinian nation.”

Despite objections from Ramallah, the encounter bore immediate fruit as Israeli commercial planes were later that month given permission to use Sudanese airspace. This, in turn, decreased the flight time from Israel to South America by three hours.

The fact that Sudan, which has a population four times larger than the UAE and Bahrain combined, and whose geographical size is 22 times bigger than those two countries together, appears to be choosing a path of engagement with Israel is a remarkable twist.

A historic development of this magnitude between former enemies simply cannot be downplayed or ignored.

In Case You Missed It:  Is He Talking About Joe Biden? Barack Obama Takes Shot at ‘Crazy Uncle Joe’ While Campaigning For Warnock (VIDEO)
Posted in Israel and tagged Freedom, HonestReporting, Islam, Israel, Jihad, Palestinians, Terrorism.

Israel’s parliament is slated next Tuesday to vote on whether to approve the normalization agreement forged with Bahrain.  The motion...