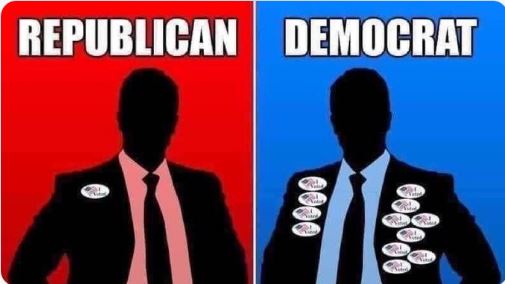 “Democrats have been thinking about this for a long time…”

I fully expect that Twitter and Facebook will suppress circulation of this blog post, but so what?  The half of the country that never strays beyond the mainstream media narrative would find it unbelievable, a fantasy of conspiracy theorizing.  After four years of their media telling them that Russia hacked the 2016 election, and Hillary claiming she was cheated, the new media-approved narrative is that any questioning of electoral fraud is an attack on democracy.

Such people are a lost cause, unless (or until) crimes are proven in court and election cheaters are sentenced to prison.

But for the rest of us who have eyes and brains, there is no stopping suspicion and activism in the “nasty street fight ahead.”  “Samizdat” is a word that Americans are going to be using a lot, at least until Google gets around to changing the definition that still, for the moment, comes up when you search for it:

One truth-teller with an audience in the mutli-millions is Tucker Carlson, and last night he laid out convincingly the path ahead by which the left, principally relying on its media and social media dominance, will attempt to install as president a man who needed fraudulent votes to win.  The plot, in short, is to have the TV networks, AP, and NYT/WaPo declare the race decided.  At that point the social media censors step in and suppress all efforts — even those of a sitting president — to uncover the fraud as conspiracy theories and an attack on democracy itself.

If and when Trump-supporters (and a few others who see what is going on) take to the streets and actually threaten the coup, they will be repressed — bloodily, if necessary.  This response already has been signaled.

In the interest of saving your time, I have cued up his presentation last night to skip his review of the way the last presidential vote battle, Bush v. Gore, was covered by the MSM.  The contrast with today is instructive.  If you are not in a hurry, start at the beginning. [Note: the original video vanished. This is a new video that I could not cue up. The whole thing is worth listening to, though.)

“Americans who love this country are beginning to fear it.”

In 2020, an astounding 88 percent of those registered to vote seem to have voted.  In Ohio, another battleground state, the turnout was a much more typical 68 percent.  The highest voter turnout in recent years nationwide was 61.6 percent in 2008.  In 2012, the last year for which data are readily available for Wisconsin, the turnout was 65 percent.

If the Wisconsin average was 88 percent statewide, some parts of the state obviously had to have higher numbers.  In this regard, the City of Milwaukee is suspect, and not all of Milwaukee, either.  Contrary to expectation, in many of the wards with the heaviest concentration of black American voters, the turnout was relatively light.  Joe Biden was no Barack Obama, but more on this in a minute.

As a caution, let me call this a work in progress.  I am looking at a ward-by-ward spreadsheet that strikes me as a legitimate.  Those who know Milwaukee better than I should feel free to contact me through American Thinker.

The most striking feature of the data is a fact that cries out for clarification: in seven wards, voter turnout appears to have exceeded 100 percent.  In two of those wards, turnout exceeded 200 percent.  In another 15 wards, voter turnout exceeded 95 percent.  Joe Biden carried 21 of the 22 wards of the 95-plus-percent wards.  But then again, he carried all but one of the 67 additional wards in which the turnout was above 90 percent and won 80 percent of the vote citywide.

In 25 wards, Biden received 97 percent or more of the vote, none higher than 98 percent.  Based on exit polls, it is highly likely that these were overwhelmingly black districts.  No other demographic could produce those numbers.

One suspects that Democratic operatives could not afford a repeat of Philadelphia 2012, when Barack Obama received 100 percent of the votes in 59 voting districts.  They know that Trump is no Mitt Romney (thank God!).  Here is how PolitiFact tried to cover for this apparent fraud:

For Pennsylvania, the meme reads, “In 59 voting districts in the Philadelphia region, Obama received 100% of the votes, with not even a single vote recorded for Romney. (A mathematical and statistical impossibility.)” This kind of happened, and it’s not actually mathematically impossible.

These fact-checkers do not know how foolish they sound.  Barack Obama outscored Romney by a combined 19,605 to 0 votes cast in these 59 districts.  Fidel Castro never did this well.  That said, not a single major media outlet followed up on the Philadelphia story.

They should have.  According to Roper, Romney received 6 percent of the black vote nationwide.  If those numbers held in Philadelphia, and there is no reason to believe they would not have, nearly 1,200 of these Philadelphia voters would have voted for Romney.

According to exit polls, Trump doubled Romney’s vote totals among black Americans to 12 percent.  To subtract all of his votes would have been too obvious.  Interestingly, in every one of these 97- to 98-percent wards, voter turnout was below the statewide average.  This suggests that if there were any mischief, it was of the traditional, small-scale kind.

Wisconsin has known voter fraud before but never on this scale.  According to the MacIver Institute, a Wisconsin free-market think-tank, nearly 4,000 cases of likely voter fraud were recorded by state officials after the 2016 election, close to a thousand of which were referred to district attorneys.

The likely large-scale fraud of 2020 calls way too much attention to itself.  If the data I am looking at are correct, there are people on the hard left who may want to get caught.  For them, a Biden win overturned by the Supreme Court would offer a whole lot more opportunity for mayhem than they could hope to find with a faltering old liberal as president.

In Case You Missed It:  BREAKING: Suspect Taken Into Custody in Murders of Four University of Idaho Students
Posted in Tyranny.